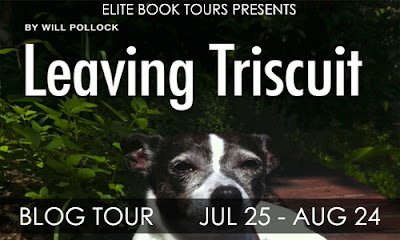 Welcome to my tour stop of "Leaving Triscuit" by Will Pollock, presented by Elite Book Tours.  To follow the full tour, please visit here. 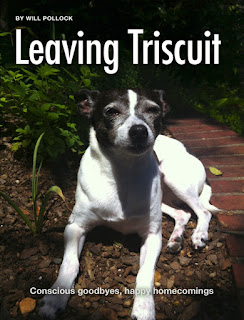 Say “hello” to better good-byes! “Leaving Triscuit” is a blueprint on how you can heal the stress of leaving pets while you’re away for work or leisure. This poignant and personal story is woven with advice from animal- and human-behavior experts who contribute affirming, indispensible strategies to strengthen and even improve the unique bond between pet and parent. Using picture imaging and harnessing the innate, unspoken connection between pet and parent, your separation anxiety will fade away and a greater understanding will be formed.


Triscuit gazed at me with forlorn eyes and a worried mug. Agitated and distressed, she was in effect saying, ‘Good grief, not again.’ Triscuit hopped on the bed and straight into the suitcase, as if to plant her flag and insist I pack her, too. As a canine parent, you know this doggie agenda: eyes as big as saucers, ears pinned back, shoulders slumped, spirit hanging low. Like Triscuit and so many other dogs and cats of her intuitive ilk, she knew.


Q & A with Will Pollock

What books/authors have influenced your writing?
I’m very much influenced by disruptors of all stripes, so that includes writers like Eric Schlosser who deconstructs some of our most pressing American issues with the type of investigative tenacity that I aspire to. I’m also quite obsessed with metaphysics, and was changed to my core by books like The Celestine Prophecy and the poem Desiderata. These days I’m reading deeper-dive news items in support of my culture and news blog, CrankyYank.com.

Tell us something you hate doing. Why?
I hate having to fast and steer clear of coffee in the morning. Like as in tomorrow morning when I have to fast before hand surgery! Oh gosh it’s awful. Coffee is the elixir of life, and when I don’t have that my whole day gets turned on its side.

Share a funny incident in your life.
My beloved Rat Terrier, Triscuit (who is the inspiration for the book), keeps me entertained from sun up to sun down. I have myriad stories of her being a goof and doing hilarious things. Here’s one I’ll share: she saw a squirrel in the front yard, and decided to chase it. We live in the heart of the city so it gets dicey if she were to run in the street. Anyways, the ensuing chase took her to the street and down the sidewalk, where she ultimately caught up to the squirrel. The squirrel turned around and bit Triscuit, who immediately shrieked, turned and ran back in to the house whimpering. From that day I’m convinced she’d never again allow herself to actually catch a squirrel.

What's your pet peeve?
How much time do you have? Ha ha. I have many of them. Most recently I went to see the Absolutely Fabulous movie and, about halfway through, I had a migraine from how horrible the editing and filmmaking was. Poor filmmaking is a big, big pet peeve, because I know how hard that job is and I also know that it can be done well with just a little extra effort. This was an important movie because it was a reboot of a beloved cult classic and they really bombed with it. The screenplay (see my related answer below) from Jennifer Saunders is actually quite good and I didn’t expect to hate the film itself so much.

Have you ever had one character you wanted to go one way with but after the book was done the character was totally different
I’m more of a non-fiction writer so this one doesn’t so much apply to me. Even in books I’ve read I can’t think of an instance of that. (

What’s you next project?
Thanks for asking! I’m still nailing that down, but for now I’m committed to writing a book that examines emotional intelligence in men and how it can be the cure to our ills. It’s called EIQ: Everyman’s Guidebook to Emotional Fortitude, and I’ve already finished a working proposal. I’ll either find a publisher or self-publish. I’m not sure yet. I’d like it to be a full multimedia experience, complete with a music soundtrack and lots of great sources.

If you could write in another genre what would it be & why?
Definitely a screenplay or a play. I’m fascinated by the genre as a moviegoer and entertainment junkie, but I know it’s a completely different animal. I’d love to study it some day because I know I’ve got more than one project in me for the future. There’s something about setting scenes and developing characters that is both horrifying and deeply electrifying all in one breath. I hope some day I can do just that. 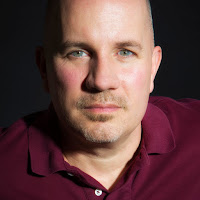 Will Pollock is a freelance multimedia journalist, content wrangler, artist and author based in Atlanta. His love of dogs and animals began early on when his family owned a Great Pyrenees in New York City named Yeti. He decided to write “Leaving Triscuit” after the stress of leaving his beloved Rat Terrier, Triscuit, while on a three-week trip to Ireland. Separation anxiety is a problem for most pet owners, and the tips and strategies Will learned from experts will help ease that pain.


Will is giving away 3 ecopies of his book to the winners of the below Rafflecopter!

The giveaway ends August 24th and is open INTERNATIONALLY!