The author will be awarding a digital copy of An Accidental Gentleman to a randomly drawn winner via rafflecopter during the tour. Please visit GoddessFish.com to follow the tour, remember the more you comment better your chances on winning. 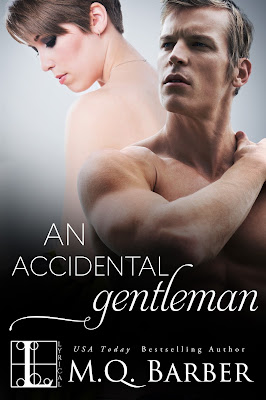 Fast forward never took so long . . .
Kit Runyon isn’t looking for a man to keep—she’s happy with the occasional one-night stand and no strings. Making sure her family’s electronics repair shop is profitable enough to support three generations is her main focus. But when Brian Hendricks walks into the store, one look, one word, and she knows he’s not wired like any man she’s ever met before . . .
Brian’s attracted to Kit’s strength and no-nonsense attitude, but he’s tired of the one-and-done dating scene. He’s ready to settle down with the right woman, even if that means he’ll have to play things slow and stay out of her bed to show her there’s more to love than just mind-blowing sex. But at this rate he’s liable to short all the circuits . . .

Gravel crunching under his tires, Brian pulled up to the farmhouse and parked alongside Rob’s pickup and the SUV they’d gotten to replace Nora’s beater. Fuck takeout. He’d run his ass off cramming best-man duties in the narrow window between Christmas and New Year’s. A bachelor deserved to dine off that apology at least through summer grilling season. After Labor Day would be soon enough to call them square.

He took the porch steps in one leap. Rob understood women. He’d landed Nora despite the awful introduction Lucas would never live down. And Nora, she’d know why his nameless Amazon had rejected him. She’d decipher woman-code, he’d track down said woman, and the date would be on.

The unlatched screen door invited him on inside. He poked his head ’round the corner toward the kitchen as the screen snapped shut. After eight. They might’ve eaten or be out back finishing up.

“Hey, Sherwood, Maid Marian, what’re you serving tonight?” he yelled toward the stairs as he patrolled the empty first floor. The dining room sported actual furniture instead of Rob’s piles of someday projects. Living with a woman changed a man. “I come bearing no gifts.”

“Brian, I swear to—” Rob’s deep bark cut off, and the peal of Nora’s laughter followed. “If you’re staying for dinner, grab a beer and go the fuck outside for at least fifteen minutes.”

He slumped over the banister and howled his laughter. Heading into month six and they still went at it like newlywed rabbits. “You’re only giving her—”

He sucked back the laughs to get words out. “You two trying for a baby up there?”

M.Q. Barber likes to get lost in thought. She writes things down so she can find herself again. Often found staring off into space or frantically scratching words on sticky notes, M.Q. lives with one very tolerant, easily amused husband and one very tolerant, easily amused puppy. She has a soft spot for romances that explore the inner workings of the heart and mind alongside all that steamy physical exertion. She loves memorable characters, witty banter, and heartfelt emotion in any genre. The former Midwestern gal is the author of the Neighborly Affection contemporary romance series. Pick a safeword, grab a partner or two, and jump in.