Today we spotlighting Lindsay Detwiler's
New Release
Who We Were!

Enter below for a chance to win a signed paperback
of Who We Were and an ebook copy for the
YOUR friend from Lindsay Detwiler!

Lindsay Detwiler's
New Release
Who We Were! 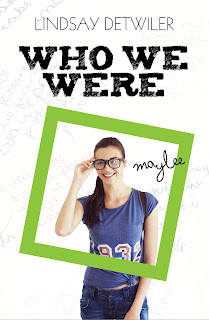 “I guess that’s the thing about high school reunions, though. They make you snap a little.”

In the ten years since high school graduation, Maylee’s career, living arrangements, family, and especially her love life are at a standstill. When her twin brother, Mitch, falls for her high school enemy at their ten-year reunion, Maylee’s life is catapulted into chaos.

Maylee’s hatred for the blonde-haired Josephine isn’t the only thing she discovers at her reunion. Benson Drake, the introvert from high school, has matured into a sexy intellect. Now a writer and bartender, Benson’s grown into a man with a perfect balance of quirky wit and sex appeal. After a wardrobe malfunction, a spy mission gone wrong, and a dangerous cup of coffee, Maylee and Benson explore something they never even thought about during senior year. Along the way, they find out that reconnecting with the past can change you… or maybe just help you find your true self.

Q & A with Lindsay Detwiler about Who We Were!


Tell us about Who We Were.

Who We Were begins with Maylee Keagan attending her ten-year high school reunion. At twenty-eight, Maylee’s life isn’t quite where she thought it would be. Her love life is a disaster, her job isn’t what she had in mind, and she’s living with her twin brother due to financial issues.


Things get much worse, however, when her twin brother, Mitch, falls for her high school rivalry, Josephine. Maylee is reminded that sometimes high school drama doesn’t die as she deals with the ultimate mean girl.

One positive thing does come from the reunion, though. Maylee literally falls for Benson Drake, the once nerdy introvert who has morphed into a sexy writer. As Benson and Maylee explore a relationship they never thought about during senior year, they start to figure out that who they were and who they are can be one in the same.

What initially inspired you to write Who We Were?

I was actually attending my ten-year reunion when I wrote this book. I was inspired by the idea that so many of us thought our lives would be very different ten years after high school. I also was inspired by the fact that woman drama never seems to fade, no matter what stage of life you are in.

Tell us little about the characters Who We Were.

Maylee Keagan is the nerdy girl from high school who is trying to work out what she wants in life. She doesn’t have things together like she thought she would. She’s the bookworm turned grown up who is a bit reserved and a bit nervous about what life has in store.

Her best friend, Shauni, is her exact opposite. Shauni is impulsive, wild, and carefree. She encourages Maylee to live it up and helps her get out of her head.

Like Maylee, Benson is a bit of an introvert. However, he’s sort of come into his own after high school. A bartender and a writer pursuing his dreams, he helps Maylee see that you don’t have to have a certain life to be happy.

Josephine is the villain in the book. She’s sassy, full of her herself, manipulative--everything Maylee isn’t. However, as the book progresses, Maylee starts to see another layer underneath her hard exterior.

I love the scene where Maylee and Benson first reconnect because it is just so “them.” It’s quirky, socially awkward, and embarrassing. I had so much fun writing this cheeky scene and imagining what Maylee would be feeling.

I have a seventh novel called Remember When releasing April 29, 2017. This is a romantic drama that I’m really excited about. I am currently writing a beachy contemporary romance series and hope to have it finished in a few months.

Now an exciting excerpt from Who We Were!

I guess that’s the thing about high school reunions, though. They make you snap a little. At least I can admit to it. This has to be the first step to admitting psychosis, right?
Mitch thinks I’ve taken it too far. Shauni, of course, thinks I’m doing the right thing.
“Show those snotty jerks just what you’ve become,” she told me yesterday. “Especially the blonde. Show her you’ve won.”
I’d smiled, munching on my lunch of celery and carrot sticks in my attempt to shed a few more ounces of water weight. Nevertheless, the whole time I was asking myself a very hard question: Have I really won? If I’m going to so much trouble to fool my classmates into thinking I’ve done so well for myself, aren’t there deeper problems than booblessness and a flabby waistline?
Maybe the problem isn’t my body type, my hair, or any of it. Maybe it’s because at twenty-eight, I thought life would be a little different, a little bit more… grown-up.
Looking in the mirror, however, I know I can’t pretend to be all introspective and mature about it. Even though I know it’s ridiculous, there’s a part of me deep down that does want to show her I’ve done okay for myself, no matter what. I want the girl who tortured me in high school, who convinced me I was a mousey nerd, to realize I blossomed.
Even if it is a bit of a lie. Or a lot of a lie.
“Let’s go,” Mitch yells from the living room. I sigh.
No more introspection. It’s go time.
It’s time to face my past.

An English teacher, an author, and a fan of anything pink and/or glittery, Lindsay's the English teacher cliché; she love cats, reading, Shakespeare, and Poe.

She currently lives in her hometown with her husband, Chad (her junior high sweetheart); their cats, Arya, Amelia, Alice, Marjorie, and Bob; and their Mastiff, Henry.

Lindsay's goal with her writing is to show the power of love and the beauty of life while also instilling a true sense of realism in her work. Some reviewers have noted that her books are not the “typical romance.” With her novels coming from a place of honesty, Lindsay examines the difficult questions, looks at the tough emotions, and paints the pictures that are sometimes difficult to look at. She wants her fiction to resonate with readers as realistic, poetic, and powerful. Lindsay wants women readers to be able to say, “I see myself in that novel.” She wants to speak to the modern woman’s experience while also bringing a twist of something new and exciting. Her aim is for readers to say, “That could happen,” or “I feel like the characters are real.” That’s how she knows she's done her job.

Lindsay's hope is that by becoming a published author, she can inspire some of her students and other aspiring writers to pursue their own passions. She wants them to see that any dream can be attained and publishing a novel isn’t out of the realm of possibility.