Maggie Mae will be awarding a $15 Amazon or B/N GC to a randomly drawn winner via rafflecopter during the tour. Please visit GoddessFish.com to follow the tour, remember the more you comment better your chances on winning. 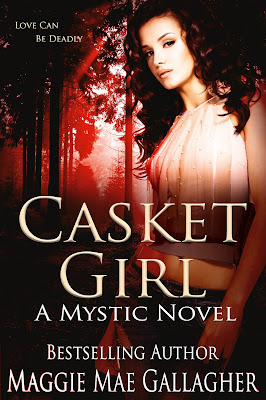 All he wants is to find a killer...

FBI Special Agent Josh Blake has seen some bizarre cases in his day. His latest case is one for the record books. He has multiple homicides, corpses drained of every ounce of blood, and no suspects. When rumors surface that the French Quarter may be hiding an insidious monster bent on drenching the streets in dead bodies, he must suspend logic and place his trust in the mystical.

She wants a fresh start...

Isabelle Toussánt left her family home in the bayou five year ago, cutting all ties with her abusive whiskey swilling stepfather, to forge a new life in the French Quarter. Now a successful business owner of Madam Toussánt’s Mystical Gifts in Jackson Square, and a Seer with voodoo roots. The foundation of her new life shatters when one of her employee’s winds up dead and she is dragged into a deadly game where she becomes the target of a serial killer.

A passion neither expected...

Determined to stop the brutal slayings, Josh must rely on the beautiful Isabelle who makes him question everything he has ever known about life and death all while surrendering to a desire hotter than a Bayou night. When Isabelle disappears without a trace, with tourists flocking to the party capital for Halloween, and the body count continues to mount, Josh will be forced to push beyond the boundaries of what he thinks is possible and rescue the woman he loves before it's too late.

Isabelle didn’t know what to make of Agent Blake. Other than he was the poster boy for the all-American hunk. His face was all hard planes and angles. Jaw lined with stubble a shade or so darker than his dirty-blond hair. Nose had a slight bend to it like it had been broken at one time. Thick eyebrows above eyes the color of Lake Pontchartrain at dusk with tiny squint lines that crinkled at the corners. His eyes were weary with exhaustion, like today was just another day in the long line of how cruel people could be to other people.

He was a hard man. His full lips were pressed into a firm line, and Isabelle wondered when was the last time he smiled. He wasn’t cold exactly, more that he’d learned how to keep his emotions in check and behind a brick wall. He was solid like a mountain, immovable from his stance but withstanding everything that came his way. If Isabelle wanted to know what made the agent tick, she’d have to violate her code of ethics and perform a deeper read on him without his consent, and she wouldn’t, not even for him, as that would cross way too many ethical boundaries. He sat stiffly on the small padded chair as she took a seat opposite him. It put the crystal ball between them, and she wondered what she would see about him if she took a moment to gaze.

She tasted a hurt with her psyche. One he’d buried deep and used to shield himself, but it was tinged with the flavor of loneliness. A deep-in-the-bone loneliness. Like he’d been chewed up and spit out by life many times, but he kept on rising each time. That took guts and courage, which made him rather fascinating. Courage of the heart and soul was a rare trait.

“What can I do for you, Agent Blake?” She folded her hands in her lap and did her best to ignore his scrutinizingly intense stare as he analyzed her. She wondered what he saw when he looked at her. By his unrepentant sneer at her crystal ball, he gave the distinct impression that he didn’t believe in the mystical spirit world. This was not a man to trifle with unexplained phenomena, but one who never blurred the lines between right and wrong. There were no shades of gray for him. And yet, an unbidden image of him blossomed in her mind of him laughing—deep booming laughter, the kind that transformed a person from merely attractive to heart-stoppingly gorgeous. Witnessing the joy, even within the scope of a vision, and his potential for it stirred her in ways she hadn’t felt in years, if ever.

“Call me Josh,” he said and placed his notepad on the table with a blank sheet, a pen gripped in his hand. She’d bet he had been a perfect student as a child.

So, he was going to play the good cop with honey to see if she’d tell him all her deep, dark secrets.

And if you like your romance with a bit of spice and kink be sure to check out Maggie Mae Gallagher writing as Anya Summers!

The Dungeon Fantasy Club Series
HER HIGHLAND MASTER, Book 1
TO MASTER AND DEFEND, Book 2
TWO DOMS FOR KARA, Book 3
HIS DRIVEN DOMME, Book 4
HER COUNTRY MASTER, Book 5
LOVE ME, MASTER ME, Book 6
SUBMIT TO ME, Book 7
HER WIRED DOM, Book 8