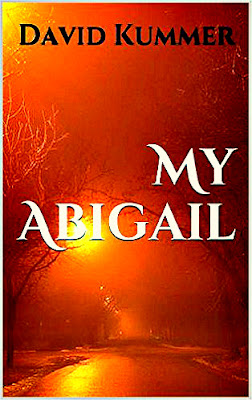 Abigail had a secret
She was different... but I loved her.
But after it ended, there were no words to describe her. No way to make sense of it all.
Something so sweet, so loving, so gentle... in the end, it was all terrible.

In this gripping, psychological thriller, Caleb meets the girl of his dreams. Abigail is pretty, funny, and she cares about him like nobody ever has. But underneath her appearance is a monster that nobody can control... and nobody knows about.

When he is confronted with the truth, Caleb must make a terrible decision. Will he love the person who's hurt him? Or will the secret tear them apart?

What even Abigail doesn't understand is that she's dangerous. More dangerous than either of them realize. But is it too late to turn back?

Q & A with David Kummer about My Abigail!


Tell us about My Abigail: A Psychological Thriller.

My Abigail is a book that I originally came up with by thinking of what would be a fantastic twist for a novel. The twist comes about ¾ of the way through the book, and it really is what the whole thing hinges on. Some have called it sad, some have called it terrifying. I prefer to think it’s somewhat both. Nobody has seen it coming yet, and that’s what makes me most proud!

What initially inspired you to write My Abigail: A Psychological Thriller?

I was inspired to write the book because I wanted to create something utterly unique. I had never heard of a book like My Abigail, not quite in the sense that I wrote it. There have been books where a boy meets the girl of his dreams and she turns into a nightmare. There have been stories about a misfit boy growing up through terrible things that happen to him. And there have been tales about people with mysterious sides and hidden actions. But none of those stories were quite as frightening and quite as deep as My Abigail.

Tell us little about the characters in My Abigail: A Psychological Thriller.

Caleb is a teenage boy who lives with his aunt and uncle, for reasons that he can only guess at. Abigail is the new girl in town, and though neither of them are popular they form a strong bond of friendship and romance. When Abigail starts to change, however, Caleb is horrified to find out the truth. What she was and what she really is are two very different things. Abigail doesn’t want to hurt him… but somebody will have to pay the price.

The hardest part is by far a certain chapter right before the big reveal. It’s an emotional, heartbreaking chapter, especially for me to write. It explains everything about Abigail, and makes it clear that this book might not have a happy ending. It is the climax of the book, and the lowest of lows.

I really enjoyed writing about Caleb and Abigail interacting. I am probably going to go back and revisit the book later this year, filling in some blanks and writing some more chapters to make a sort of Extended Edition of it. It’ll be fun!

I plan on writing a sequel to my book She: A Horror Novel, as well as a sequel to Enden: A Fantasy Novel. Both of those projects will come out in the next 12 months, so it’s an exciting time!

My Abigail was a joy to write, a joy to promote, and I am sure it will be a joy for you to read! I am very thankful to this website for hosting my promotion, and I wish everybody luck with anything that might be going on in their lives. If you’re ever looking for a good book to settle down with and get your mind off reality, I’ve got you covered ;)

Now an exciting excerpt from My Abigail!

"I don't know you!" I stood up shakily.
"I've never seen you before!" "Ah, but you do. You see me almost everyday. You just don't ​ ​see it. Quite ironic, don't you think?"
"Leave me alone! I'm just going home."
That smile spread, showing teeth. Surprisingly, his teeth were pearly and perfect. Most of his features were in good shape, actually. The pale moonlight and black, shoulder-length hair made him look a bit like Michael Jackson. With a Joker smile.
"Aren't sentences that begin with ​ ​Q just fascinating?" he asked. "Let's think of some together."
"No."
Ignoring me, he continued, "Quick deaths. Quiet pain. Quit smiling. Question nothing." He stepped closer to me so that our noses were touching again. "Don't you like this? My touch? It is -as the ​ ​Q would sayquite enticing."
"Get away!" I screamed. "You freak!"
That smile turned to a frown on his face. It only looked more terrifying. Anger seemed to erupt in his eyes for a flash, but then it was gone.
"Fine. I tried to play nice. I know something you don't. Something you want to know. About a girl."
"A girl?" I asked. I knew he was serious. His expression had gone from playful to sober.
"Her name is Abigail, I believe."
"Abigail!"
He smiled again. "There's that recognition we deserve. Now, yes. About her. You are wondering why she acted like she did, are you not?"
"How did you... Are you stalking me?" I took a step back.
He took a step forward and reached for my hand. "Of course not."
"Get back," I said! "Or I'm leaving."
"I'll follow." He winked.
"Just tell me what you want to say. So I can leave." I looked at my wrist, pretending I had a watch. "I need to be getting home."
"I'm sure that watch you don't have can tell you lots about time. Just like I can tell you lots about Abigail." "Tell me, then."
He shook his head. "I'd rather you find out yourself. When you see her next, ask her about her childhood. Really" -he made a clawing motion ​ with his hand- "​dig into her." He cackled again. "And do it to that nerd Xavier, too. Oh, boy, has he got secrets."
The monster began to walk off into the night, but I called after him, "Wait! What secrets? And what's your name?"
He smiled at me from over his shoulder, giving me an image that would haunt my dreams for years. ​ ​
"Lots of secrets. Everyone has them. ​Dirty secrets. ​Rotten secrets. As for my name, you don't need to know it yet. You know my face." He winked at me one last time. "You know my touch."

My name is David Duane Kummer. I'm a teenager, with a couple published novels and a collection of short stories.

I live in a small, river-town on the Ohio River in southern Indiana. Along with taking care of younger siblings (I have eight total), I make time for writing in between school and sports.

When I'm not writing, I enjoy talking with my hilarious friends and amazing girlfriend, spending time with my loving family, watching movies, and working out to burn all of the calories I get from binge-eating Hawaiian Rolls. Those things are really addicting, am I right? I'd rather get payed in those than money.

Anyways, thank you for checking out my author page and my books (if you've done that.) Have a great day!