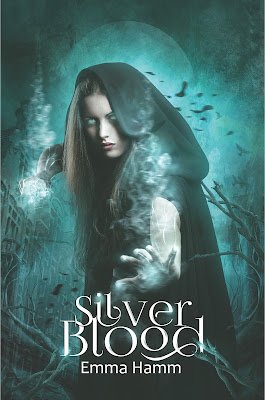 A PROPHECY TO FULFILL

Two hundred years ago, our world changed forever. Two realms combined in an explosion of magic. One morning everything was normal and the next? Every human body was host to another magical creature who had thoughts and a mind of its own. However, with power comes darkness. Someone wants to wipe this earth clean and will stop at nothing to consume it.


SHE IS NOT A HERO

Or so she thought. Wren had grown up with another voice in her head but had never considered herself magical. She doesn't have the talents other people have. She certainly doesn't have the abilities anyone else has. But she is charming and manages her business quite well. She deals in emotions and makes people happy. It's a simple life, but it's hers.


HE THINKS SHE COULD BE

Burke was a bodyguard first and always. He had been sent to collect her and deliver her in person to the most powerful creatures in their world. But the moment he steps through the broken door of her shop, his world changes forever. She's strange. She's uncomfortable. And she's so damned beautiful. He is convinced she is part of a prophecy that can save their world.

But how to convince her?

Q & A with Emma Hamms about Silver Blood!

Tell us about Silver Blood.

Silver Blood is the start to my most unique series yet. You’ll follow Wren, a character who’s hair is constantly changing color, as she realizes she’s part of a prophecy to save their world. And the world is very different than ours. It’s technically ours, but 200 years before the series starts, a dimension made of magic collides with ours. This results in magical creates sharing bodies with the humans.

Essentially, this means that humans have a little bit of a magic and another voice in their head. You’ll meet Satyrs, villains, Dream Walkers, and Gods as you find out what the voice in her head is, who it is, and how this has made her an important piece of a puzzle.

What initially inspired you to write Silver Blood?

Honestly, I think I was on Pinterest? I find a lot of inspiration from photos, and I’m pretty sure I saw a self portrait of someone who suffers from anxiety. Basically, the image shows multiple people coming out of one person who’s forcing herself to remain calm.

That led me to thinking about what it would be like to cognizantly be aware of a person inside your head, and how that would make you feel.

And of course, I also love the idea of modern day magic. Wren (the main character) owns a shop where she sells “Juice”. It’s basically liquid emotion. When you drink or inhale it, you’ll feel the emotion you bought. I particularly suggest Euphoria.

Tell us little about the characters Silver Blood.

Well without spoiling the book TOO much, there are technically three main characters. But I’m only going to tell you about two.

There’s Wren. She’s an artsy, green loving, hair color changing, oddity. In this world, every character shares a head space with another creature. A magical one. Wren has no idea what hers is, but she does know that it allows her to create this substance called “Juice”. It’s liquid emotion. So you want to feel happy, drink a little Happy. If you want to feel in love, drink a little Love. Wren makes it, sells it, and sort of gets by with a crumbling building to her name.

And then there’s Burke. Our male love interest is a Dream Walker. He meets Wren in her dreams for the first time, and a few other times in this book. He’s loyal, kind, and definitely the sort of guy you want to have your back. His entire life has been leading up to this moment where he gets to meet and find her. Even though he doesn’t really know that.

Keeping track of all the characters! Every time I introduce a new person, that’s actually two people. Each one has their own specific personality, their own specific powers, what they know, how they act, it’s a lot of people to have rattling around in my head. And if you’ve read the book, you also know one certain character who makes it all the more hard.

Oh gosh, anything with E. Wren’s creature inside her head was a blast to write. There’s so many cool things about E must mostly that it’s so mysterious. Even Wren has no idea what it is or what it’s capable of. But E is remarkably protective of her. It loves her like the father she never had, and because of that, she remains safe.

Writing their relationship (even more than the romance) was so much fun.

Continuing on with this series for now! There are four books in the series of blood, and a couple characters I would love to write some novellas about. Red Blood is out, Blue Blood is written, and the last book, Black Blood, is particularly a treasure that I will be taking my time on. I’m expecting the last one to come out late summer.

Wren dangled from the ladder one handed as she turned around to look. Her hair slid over her shoulder in a waterfall of color. She was nearly falling off of the ladder, but she didn’t worry. If she fell, it was only bruises that waited for her. The ground wasn’t all that far away after all.
The man standing at the counter was not someone she recognized. Wren didn’t like that. People around here were regulars and those that weren’t, were going to cause trouble. Wren didn’t have time for trouble.
He wore a long leather jacket that fit snug across his broad shoulders. Gold buttons nearly blinded her when the light caught on the rows that followed the broad expanse of his chest. Military jacket, if she remembered correctly.
Black pants covered his legs, but it was his eyes that she couldn’t look away from. A ring of vivid green circled his pupils and complimented the aristocratic arch of his nose and the jut of his strong jaw. Blonde curls were cropped close to his skull which was far higher in the air than any head had a right to be.
He was a handsome devil that was for certain. But Wren had found that the devil was the word to look out for when meeting someone like him.
“Can I help you?” She asked. Her voice was breathless she noticed with annoyance.
“Not me, no.”
Wren wrinkled her nose at him. “You’re in a store you know. People usually come in when they need to buy something.”
He opened his mouth to speak, but the doors behind him jangled open as a group of young men came in. They were already laughing and Wren knew exactly what they were here for. She had to lean to the side drastically to grin at them because the other man was in the way.
As she leaned, the unknown man lurched forward. The bar stopped him and Wren gave him a confused look as his hands clenched on the wooden edge. Did he really think she was going to fall? He didn’t know her well enough to think he could catch her if she slipped. And if she did, which was often, she knew it wouldn’t hurt that much.
“Wrennie!”
She winced when she heard the nickname. She hated it when they called her that. “Hello boys. The usual?”
“Aw you know us too well.”
Of course she did. They were in here every weekend for the same thing. Everyone loved her Juice and these boys wanted a little bit of danger without having to worry about getting hurt. She gave them the feeling of Adventure. It was a dangerous blend of Euphoria and Fear. The boys always loved it.
Wren made sure to keep them in a back room every weekend. They could get a little rowdy and she didn’t need any more things in her front room broken. Like that hole in the ceiling. That was going to bother her for the entire night. She stared up at the offending black space as she found their vials.
“I happen to have a little bit of it waiting for you.” She spun on her heel to grasp the bottle that contained the lime green smoke. It held more than her average amount of smoke and was on the shelf precisely for these men.
“Aw, Wrennie what would we do with you?” The boy asked as he handed her coins.

“I suspect you’d be fine.” The coins clinked in her hand with a satisfying crack. Though she was loath to admit it, the sound of jangling coins was one of her favorites.
They wandered away from her to the back room they knew were theirs and she blew a breath at the stray hair that had stuck to the teal lipstick on her mouth.
“What can I do for you, then?” She turned towards the unknown man and propped a hip against her counter.
He was giving her a puzzled expression that she didn’t quite like. She wasn’t some kind of enigma for this man to figure out. He didn’t know her and she didn’t know him. That didn’t mean they needed to know each other. Wren didn’t know that many people. She didn’t want to. Knowing someone led to trouble and she’d already had her fair share of that.
“Well?” Her tone was a little on the heated side, but she didn’t have time for someone to stand around staring at her all night.
“Your hair should be red.”
She blinked at him. “Red?”
Her hair had not been red for many months. She changed her hair color nearly as often as she changed her clothes. Right now it was black, tomorrow it might be white. All of it came with the added help of magic that could change her hair without any work at all. Drip a little potion into her bath and suddenly she was staring at pink hair the next morning. It was lovely.
“The last time I saw you, your hair was red.”
“I haven’t had red hair for a very long time.”
“I could have swore it was only a few nights ago.”

I am from a very small rural town in Maine. I grew up amid blueberry fields, a farm full of animals, and surrounded by family. The love of creative story telling started when I was very young. I used to “act out” the way a story should have gone and argued with my mother constantly about the endings of movies. I wrote a little bit, and eventually found myself in the online writing community. My love of characters blossomed and grew thanks to the ever vigilante parents who convinced me that imagination was one of the greatest gifts of the human mind. I write, I created, I read as many books as I could next to the fireplace.