Enter below for a chance to win a full set of the Netwalk Sequence
(Shadows, Netwalk: Expanded Edition, Netwalker Uprising, Netwalk's Children,
and Netwalking Space) from Joyce Reynolds-Ward's 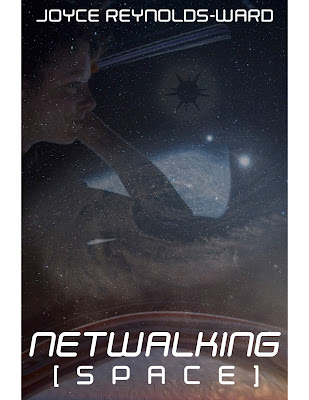 78,954 alien devices appear just outside Pluto orbit, with a projected trajectory that ends at Earth…and the data shows they’re identical to the Gizmo war machine that destroyed ten Earth cities before it was captured and confined….

For four generations Bess Fielding and her family have led the battle to control the destructive Gizmo device that also allowed for the development of Netwalk, a digital virtual networking and communication system that allows personalities to upload at death. Bess, her mother Melanie, and her Netwalker great-grandmother Sarah have suspected Gizmo’s alien origin for years.

But when a fleet of Gizmo devices arrives at the Solar System, their focus on defending against this invasion is disrupted by disclosures of dark secrets from Sarah’s past. These revelations provoke a dangerous breakdown in Bess’s grandmother Diana, turning her into a Gizmo collaborator. Bess and her family must unite to save Diana and lead the fight to protect Earth—but who is trustworthy? Who is a betrayer? Who gets sacrificed to stop the invading fleet? Bess, Melanie, and Sarah are in a race against time and face tough choices…that will impact those they love.

Tell us about Netwalking Space.

Netwalking Space is about four generations of women responding to an alien invasion of the Solar System, and how their past choices affect their present ability to respond to the threat. These four women--Sarah, Diana, Melanie, and Bess, have all been part of a larger effort to contain an artifact called the Gizmo, a mysterious war machine that destroyed ten cities before it was captured by Diana and her husband Will. So when 78,954 alien devices identical to the Gizmo appear at the edge of Pluto’s orbit, of course these four women will play a lead role in combating this invasion. Except that the Gizmo has ideas and notions of its own, and it is using dead, digitally uploaded personalities--Netwalkers--to aid the invasion. But shadows from the past with their own agenda disclose dark secrets that Sarah has tried hard to bury. As a result of these disclosures, Diana becomes a collaborator with the Gizmo. And while there are Netwalkers aiding the Gizmo, there are many other Netwalkers joining in the fight against the Gizmo’s peers, such as Sarah and Will. An additional dynamic is that due to environmental and political catastrophes, political structures have changed to the degree that corporations and corporate leaders overtly control much of the Earth governments. An entity known as the Corporate Courts manages corporate law as well as maintains custody of the Gizmo. Diana is prominent within the Corporate Courts, while Melanie and Bess have withdrawn from active participation in the Courts.


What initially inspired you to write Netwalking Space?

I have been writing in this world for some time, and wanted to tie up all the pieces I’ve left hanging in this world while writing a book that could stand up on its own without reading the others in the series. Clearly I’d love it if people like Netwalking Space so much that they go to the other books, but it’s not necessary.

The initial inspiration for the series came from a comment from my husband while we were out camping on the lip of Hells Canyon--”what would it be like to see this canyon from the point of view of a hawk?” That proceeded to my developing the concept of a wireless communication system with bioremediation nanobots, and then I came up with the concept of a mysterious war machine, the Gizmo. Because society is so disrupted at that time, no one is sure of its origin…..

Tell us little about the characters Netwalking Space.

The four main characters are Sarah, Diana, Melanie, and Bess.

Sarah is a Netwalker (digitally uploaded personality at death) who still seeks to manage her descendants, help defend against the Gizmo, and actively participates in advising her great-granddaughter, Bess, who hosts Sarah in an implanted chip (Netwalkers need to stay connected to a living person for a charge and to receive tactile input to keep them sane). Manipulative but devoted to Bess, she hides a soft side that has been buried under a hard facade for years.

Diana, Sarah’s daughter, used to host Sarah. Diana and Sarah have been opponents for years but have always agreed on the need to contain the Gizmo until Diana learns some traumatic secrets about Sarah’s past. Diana has always been uncomfortable about dealing with Netwalkers and aggressively controlled Sarah until it was time for Sarah to move to Bess. She loved her husband Will deeply, to the degree that she trusted his ability to design weapons and bond her with his favorite war machine. When Will died and became a Netwalker, that left a deep chasm in Diana’s life from which she has never recovered.

Melanie, Diana’s daughter, spent years as the person who got things done in the family company, Do It Right, while Diana engaged in political activity and high level business negotiations in the Corporate Courts. She is considered to be the strongest Enforcer capable of managing and controlling Netwalkers. She misses her late husband, Marty, and sometimes wishes that he had become a Netwalker, even though the way he died meant that he could not operate free of the Gizmo-influenced Netwalkers. She is one of the most talented living operators working in virtual digital worlds.

Bess, Melanie’s daughter, longs to explore space. Grounded on Earth for a year while she integrates with Sarah, she’s impatient to get back to the space station DIR 1 and her beloved, Alex, and get on with further expansion of space exploration and development. Bess is even better in virtual than her mother.

The conflict between what I wanted to do with the story and the reality of physics. You can only do so much handwavium to gloss over the vast distances just within the Solar System--otherwise, most of the action would have taken place on Mars rather than the Moon. I could explain the actions of the alien fleet because, well, we don’t know their tech.

Some of the scenes with Diana were very difficult. The scene where she blows off Melanie and her brother Andrew after turning rogue was one that was deeply wrenching, especially when Melanie gulps and sends out a warning which is, basically, capture Diana or kill her, whatever it takes to stop her.

I have to admit that I laughed my head off while writing the first contact message from the invading fleet to Earth. It was cheesy! Over the top! Cliche-ridden! But none of my beta readers nor my editor had a problem with it, perhaps because the first reaction from Melanie and others after hearing it is WHAT? Can you really BELIEVE this? It’s like a cheesy SF movie! A bit meta, but quite fun. And in my head (but not in the book), some of that comes from the fleet picking up on years of old bad TV alien invasion sf.

I am in the process of developing the second book of my fantasy series, Goddess’s Honor. Besides the first book in the series, Pledges of Honor, I’ve produced a prequel novella, Beyond Honor and a couple of related short stories. The arc of the Goddess’s Honor series is about a powerful woman who is destined either to challenge a vengeful Goddess and replace her or else restore her family’s right to rule the Daran Empire--but questions whether she wants to make either choice. I anticipate releasing Challenges to Honor in mid or late summer.

After those two projects, I plan to finish a rather fun urban fantasy that is a bit of a cross between Frankenstein’s Monster and Jane Eyre, with Sasquatch and a sassy heroine. I hope to sell that one to a small press. Then I want to release a Weird West novella that I’ve been working on sporadically between other projects.

Long term, I have a rough plan for a far-future sequel to the Netwalking Space world called the Star Shepherds. It’s nowhere near ready to be developed yet as I’m still contemplating the concept.

By this point in the book, our heroines are scrambling to deal with the threat posed by the alien invaders. Diana has learned awful secrets about her mother Sarah’s background which has driven her to ally with the Gizmo device that seeks to aid the alien invaders. Bess is en route to replace Diana in charge of space station DIR 1, but Diana has fled the station for an unknown destination. Melanie is trying to talk to Diana but she won’t respond—so her brother Andrew makes contact. They’re hoping for a solution…only things get worse.

Joyce Reynolds-Ward is a speculative fiction writer who splits her time between Enterprise and Portland, Oregon. Her short stories have appeared in First Contact Café, Tales from an Alien Campfire, River, How Beer Saved the World 1, Fantasy Scroll Magazine, and Trust and Treachery among others. Her books include Netwalk: Expanded Edition, Netwalker Uprising, Life in the Shadows: Diana and Will, Alien Savvy, Seeking Shelter at the End of the World, Netwalk’s Children, and Pledges of Honor. Besides writing, Joyce enjoys reading, horses, skiing, and other outdoor activities.