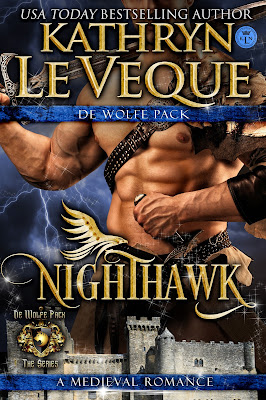 ABOUT NIGHTHAWK:
1271 A.D. - The Wolfe's greatest son is a man known as NIGHTHAWK.

Patrick de Wolfe is every bit his father's son - cunning, intelligent, and ruthless. An enormous man with his father's dark hair and his mother's pale green eyes, he's the man destined to lead William de Wolfe's great legacy. He is so great, in fact, that the king has personally asked for his service, as one of the king's personal body guards. On the eve of Patrick departing for this auspicious assignment, he finds himself caught up in a skirmish along the Scots border.

And a prize lands in his lap that will change his destiny.

A prize in the form of a Scots captive harboring a deadly and important secret, one that could bring war and destruction upon those who shelter her. When Brighton “Bridey” de Favereux is rescued by the powerful English knight, she is taken back to the massive fortress of Questing Castle, seat of the legendary de Wolfe family. Having known nothing but hardship and cruelty her entire life, she is surprised when they are kind to her. The English, who are supposed to be her mortal enemy, are gracious and generous. For the first time, she understands that people can be kind to each other.

And the kindest one of all is the man who saved her.

Some loves are unexpected while others are instantly realized. The love between Patrick and Brighton is something that comes from a deeper place of understanding and attraction, a powerful love that cannot be denied… but it is a love that may cost them both their very lives when Bridey's terrible secret is uncovered.

NIGHTHAWK EXCERPT & LINKS:
While reivers seemed to be unorganized groups of men from many clans, these raiders seemed to be organized from one or two specific clans. He saw only two specific tartans but there were a lot of men, much more than the numbers that reivers usually carried. Still, it was of little consequence. Having been raised on the borders, Patrick knew how to handle them.
Or so he thought.
His first hint that something was wrong was when he made it towards the end of the town, with a clear field of vision to where his father and the others were waiting. Only they weren’t alone. They seemed to be in a massive battle themselves and Patrick realized that the raiders must have also been split into two distinct groups, one of them lying in wait for the English who had their backs turned. Clearly, what he was seeing was far more than a skirmish.
It was a battle.
When Patrick and the other knights saw what was happening, they gave up herding the raiders through the town and made a break to go help his father and the others, who were seemingly overrun. Unfortunately, the men they’d been herding turned on them and the entire village deteriorated into two separate brawls. The raiders were going for the knights more than the men-at-arms, and Patrick found his skills being tested again and again. Men with short swords were trying to undercut him as he sat upon his horse, but he kept his shield low. With his sword, he managed to slice more than a few heads. He emerged the victor with confidence, but it was clear that this was no ordinary raid. The English had been drawn into something planned. Now, it occurred to him why the men from Pelinom were asking for help.
It was an English death raid on the borders this night.
With that knowledge, Patrick switched strategies. It was kill or be killed. Turning, he watched his fellow knights to make sure they weren’t in any particular danger. He easily held his own, especially astride his big war horse, who was biting and snapping and kicking. The horse injured or killed as many men as Patrick did. Off to his right, several dozen yards away, Patrick could see his father fighting off hordes of men trying to bring him down. They were swarming, really. He could also see Kieran fighting off men intending to do him harm.
Old knights who had done this too many times to count, still fighting off the Scots even in their advancing years. Patrick respected and admired them greatly, but he was also very concerned for them. His father was aging and he would hate to see the man get hurt, or worse, in what was supposed to be a simple raid.
And then, he couldn’t see his father anymore.
Panic seized him and he spurred his horse through and over men who were trying to block his way. The horse stomped and snapped, and Patrick was able to drive the horse through the roiling horde until he reached the spot he had last seen his father. He could see his father’s horse off to his left, struggling against many hands that were trying to subdue him, but William was nowhere to been seen.
Amazon https://goo.gl/E3acBGiBooks https://goo.gl/rLSFm7B & N https://goo.gl/PMUYsBKobo https://goo.gl/5FWYSB

ABOUT KATHRYN:
KATHRYN LE VEQUE is a USA TODAY Bestselling author, an Amazon All-Star author, and a #1 bestselling, award-winning, multi-published author in Medieval Historical Romance and Historical Fiction. She has been featured in the NEW YORK TIMES and on USA TODAY's HEA blog. In March 2015, Kathryn was the featured cover story for the March issue of InD'Tale Magazine, the premier Indie author magazine. She is also quintuple nominee (a record!) for the prestigious RONE awards for 2016.

Kathryn's Medieval Romance novels have been called 'detailed', 'highly romantic', and 'character-rich'. She crafts great adventures of love, battles, passion, and romance in the High Middle Ages. More than that, she writes for both women AND men - an unusual crossover for a romance author - and Kathryn has many male readers who enjoy her stories because of the male perspective, the action, and the adventure.