The authors will be awarding digital copies of the books on tour to a randomly drawn winner via rafflecopter during the tour. Please visit GoddessFish.com to follow the tour, remember the more you comment better your chances on winning. 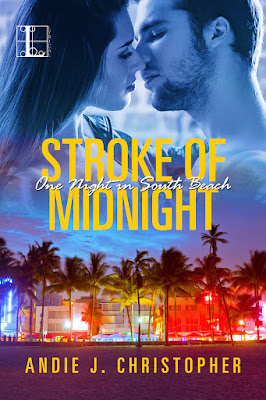 One night. New Year’s Eve in Miami. Even workaholic Alana Hernandez can’t resist the call of the city, especially if it will get her little sister off her back. But a night of celebrating turns into a night of mischief when an alluring stranger catches her eye across the dance floor.

No names.
Former Navy Seal Cole Roberts isn’t looking for anything more than a good time in Miami. Since leaving the military and being betrayed by his former fiancée, he’s not interested in unnecessary complications. But the moment he sets eyes on the sultry beauty, Cole knows this night will be far from ordinary.

No going back.
Neither Cole nor Alana are looking for a relationship, so they strike a deal: One night. No names. No repeats. But things get complicated when their night of passion becomes something neither can walk away from.

Before either of them spoke, the music stopped, the clumps of dancing bodies stilled, the countdown began, and the crowd at the bar started chanting, “Ten!”

“Hi.” She smiled and tucked her hair behind her ear.

He leaned in so that his mouth was close to her ear. “Do you know how much trouble you’re about to get into?” The timbre of his voice made her drunker than tequila.

She smirked at him as if his nearness didn’t steal a good deal of her confidence. “No more than I can handle.”

She leaned back and met his silver eyes—eyes that danced with mischief and were almost too pretty to belong to a man. His gaze was assessing, and it made her nervous at the same time as it made her nerve endings sing.

He laughed. It was a deep laugh—almost a growl—that she could feel in her chest. His laugh made her wet. She shifted from foot to foot to ease the ache that his whisky-rough chuckle put between her legs. Ridiculous chemistry.

Then he put his hands on her bare upper arms and pulled her closer to him. Blood rushed to where he touched her and her pulse sped up. Her mouth went so dry she wasn’t sure she could speak.

“Excuse me.” A harried busboy squeezed behind her.

She looked up at him from under her lashes. “Do you also want my rank and serial number?” A muscle in his jaw twitched at her playful tone.

“Just your name will do for now.”

“I don’t think we should do names.” She had not expected that to slip out of her mouth. This was really naughty. The electricity she’d felt when he looked at her from across the room was nothing compared to what she felt when he actually touched her. It made her want to throw off the mantle of good daughter and clean-up crew. She wanted to be anything he wanted her to be. Just for the night.

Andie J. Christopher writes edgy, funny, sexy contemporary romance. She grew up in a family of voracious readers, and picked up her first Harlequin romance novel at age twelve when she’d finished reading everything else in her grandmother’s house. It was love at first read. It wasn’t too long before she started writing my own stories—her first heroine drank Campari and wore a lot of Esprit. Andie holds a bachelor's degree from the University of Notre Dame in economics and art history (summa cum laude), and a JD from Stanford Law School. She lives in Washington, DC, with a very funny French Bulldog named Gus.

a Rafflecopter giveaway
By Unknown - February 21, 2017