The authors will be awarding digital copies of all books on tour to a randomly drawn winner via rafflecopter during the tour.. Please visit GoddessFish.com to follow the tour, remember the more you comment better your chances on winning. 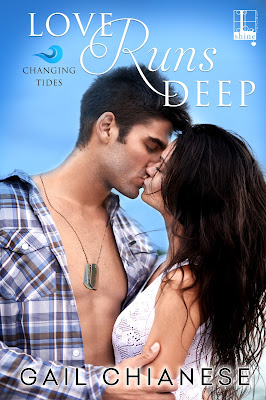 Active duty is no time for romance, but when two naval officers find themselves in truly close quarters on the USS California, the temptation to fraternize is hard to resist. Can two ambitious sailors follow orders long enough to see if love is on the horizon when they’re finally above water?

Lieutenant Nic Riley is the only girl in a long-time Navy family, and she’s determined to prove she’s just as seaworthy as her brothers. When she aces training for submarine duty, it calls for a celebration—and one incredibly hot guy is happy to party with her all night long. But when Nic boards the sub and finds herself face to face with her hunky fling, the idea of spending six months underwater takes on a whole new meaning . . .

Having a girl in every port was Lieutenant Kyle Hutchinson’s style—until the explosive night he spent with Nic. Dating onboard is firmly off limits, but Kyle can’t get her off his mind much less out of his vicinity—until a junior seaman’s devastating stunt puts Nic’s career in danger. Kyle won’t let her take the heat alone, even when it means risking his own reputation, but fighting for a future together will be a whole new battle . . .

“We have one last order of business before you can get back to work. As you all know, Lieutenant West was in a serious accident last week. He’s been upgraded to stable and the docs believe he’ll be released in the next couple of days to rehab. The spouses group has pulled together and has been and will continue to be a big help to Cecilia West and the kids while he makes his recovery. With that said, we’re short a supply officer. Or were until this morning.”

The CO paused and set down his mug, but didn’t release it.

Kyle tilted his head toward Mace. “What’s up with the Captain? He doesn’t’ usually stand during these things,” he whispered.

The CO looked up and met Kyle’s gaze. With hands relaxed on his hips, Commander Holloway glanced at all of the men before continuing.

“There weren’t a lot of options on such short notice, but PERS did present me with an interesting option. One that will put the California in the history books. We’re stealing one of the Trident’s female officers.”

The room broke out into cheers. There was nothing a fast-attack crew liked more than to stick it to a Trident sub. The CO broke out into a smile and let his guys get their good-natured comments out before continuing.

He used his hands to quiet the room back down. “Okay, settle down. Obviously, with such short notice, we’ve got some shifting to do to accommodate everyone Gatlin, you’re in with Hutchinson and Havers.”

“That’s what earplugs are for,” one of the junior officers teased.

“Master Chief Ronquillo will work out a schedule for the aft head for showers. I want it stressed to each and every man under you that when the “Women Only” sign is up, they respect it. I will not have this boat be the center of scandal because some young pup got a wild hair. Am I understood?

“Some of you may recognize the name, Lieutenant Lily Riley. For those of you who don’t, she’s the daughter of Vice Admiral Riley. The last thing I need is SUBLANT breathing down my neck.”

Instead of more applause or cheering, the CO’s announcement was met with pure silence. They had stolen the Golden Goose, at least according to Kyle’s buddy Tom, the weapons officer on the USS Alaska. As far as Kyle was concerned the Tridents could have her. Having the only daughter on the man who ran the entire Atlantic submarine force on board was asking for a headache. Sure, if the mission went well and baby girl reported back to Daddy good things, then no problem. They might even get an extra medal out of it. If things didn’t go so well?

The Commanding Officer could kiss his career goodbye, and so could every other officer and the Chief of the Boat.

The rest of the wardroom broke into various small conversations while the CO and COB consulted on the schedule.

Bryant leaned over to look at him and Mace. “Either of you met the Rileys?”

Kyle shook his head and looked at Mace.

“Served with Liam, the oldest of the three kids. Decent guy. Big guy. Should have played linebacker. I think he’s out best, Bangor or San Diego. Never met the others, but Liam mentioned her a few times.”

Which told Kyle squat about the woman herself, only that she was protected by her family.

“Lieutenant Hutchinson, I’m assigning you as Riley’s sponsor. Make sure she gets settled in. Between you and the COB, I expect her to feel like one of the crew. Get her through her quals. You know the drill.”

“Yes, sir.” AS her sponsor she’d practically be in his pocket until she got settled in. He really hoped she was a fast learner.

The XO, Christopher Ward, who was the exact opposite of the CO, stepped through the door and every eye turned in his direction. Kyle’s heart slammed against his rib cage twice and then failed to start again as he looked at the woman peeking around than man. A petite woman, with dark, almond-shaped eyes, a scattering of freckles and silky hair that he’d been dreaming of for days.

Her eyes locked on to Kyle’s. Images of her screaming his name pierced his brain.

It’s going to be a long six months, he thought.

Gail Chianese's love of reading began at the tender age of three, when she'd make her grandpa read Fourteen Country Rabbits over and over and over again (and correct him when he skipped parts). While she's branched out over the years by reading mystery, women’s fiction, and urban fantasy, she always circles back to romance in the end. That's probably because she's married to her real life hero. Her wonderful hubby has served in the US Navy for the past twenty two years and he’s done things he can’t tell her about. But it doesn’t stop her from being extremely proud of him and the sacrifices he makes for her, his family, and his country. He’s also uber-supportive of her dreams and of their three children. Living in Mystic, CT and a member of Connecticut Romance Writers of America, Gail loves to hear from readers.

a Rafflecopter giveaway
By Unknown - February 20, 2017