Out July 26th – Her Legacy by Teresa Crumpton
Follow the tour and enter to #win a $25.00 gift card to Amazon or one of five signed copies of Her Leagcy 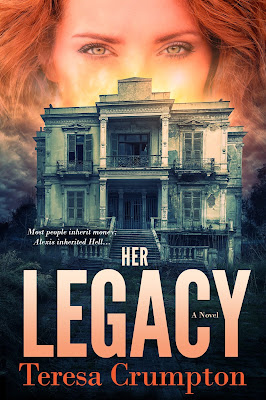 Synopsis:
The Foster House
The house is important, and so are you, hexe. The ancient ones foretold this. Yet, we’re still not sure. But we won’t kill you. We have killed before, those that didn’t have the blood. Your ancestors want to protect you; they need to. Blood is the key. He wants your blood.
Peace and harmony must be restored.
A house’s thirst for blood and a family secret are revealed when Alexis, a young empathetic law student, inherits her family’s long forgotten estate, The Foster House.
An empathetic law student is the key.
When Alexis moves in to The Foster House, she is surrounded by ghosts and a mysterious history. A history that is her legacy. But it’s not just the house she needs to worry about. An evil entity has enlisted the help of an ex-special ops Captain, Brenton Young, to manipulate Alexis’s life for his own dark purposes.
A family legacy will be revealed.
As the FBI, NSA, and local police close in on Brenton Young, Alexis enlists the help of her boss and secret crush, District Attorney, Josh Hampton. Together, can they solve the mysteries of the house and discover what her true legacy really is or will the answers they find lead to more questions & mysteries?
Available from: Amazon

Excerpt:
Tucker placed his open hand on Alexis’s. His contact blocked out all emotions in the room but his, and his were a jumbled mess she didn’t want to deal with.
“I saw in the paper that Woody passed. I’m sorry, love. Is there anything you need? I don’t have any tests for a few weeks so I’m here if you need me.” He squeezed her hand.
He wiggled his brow. Alexis tapped a finger against her mug.
“Tucker, what are you playing at?” Zak, obviously tired of the game, bristled, and his eyebrows knitted together.
Tucker’s increased tenderness, while flattering, didn’t negate the broken heart he’d given her years ago. No way am I falling for that boyish charm, catcher’s ass, or soft, full lips again. I might be crazy at times, might flirt with my boss, but I’m not stupid. That smart, rich boy is still dangerous, and no way would Tucker stay faithful while attending medical school, even if it is Harvard.
With wide eyes and furrowed brows he stared at Zak, whose face had flushed. “Not playing, Zak.” Tucker’s hand disentangled from hers and cupped her check.
His caress forced Alexis to make eye contact. Thank God he could buffer emotions, or she’d be on the floor.
“Anything you need, love.”
His expression said it all. She believed his sincerity as he pushed aside his arrogance. He had been her first love, as she had been his. For some strange reason, it bonded them in a way that kept them close.
Flipping scary is what it is.
“Thanks, Tuck. I’ll let you know.” She took his hand from her face, squeezed it, and let go. “So trolling my side of town last night?” Alexis asked straight faced.
Coffee spewed across the table. Zak wiped his mouth while apologizing. Alexis laughed and immediately wished she hadn’t as laughter morphed into hyperventilation. Before she knew what happened, she was on the floor trying to suck in air.
Excerpt Two:
Tristan’s ghostly shape appeared next to a large, distorted, nameless gravestone. Why he favored it, Brenton hadn’t a clue, but it appeared to be his favorite spot. Still unable to stare Tristan in the face, Brenton waited at parade rest while he watched the other man absently trace his fingers over the stone. The movement threw dust and snow into the air, enough Brenton could smell the dirt and grime that lay on the stone.
“What news?” Tristan asked. His translucent figure floated inches above the snow covered grass.
“Her uncle’s dead,” Colin said, twitching when Tristan moved around the gravestone to stand facing them.
“I know.” Tristan’s soulless eyes bored into Brenton and Colin. “Has she taken possession of the estate?” The demand was clear in his scratchy voice.
“Not yet. She’s moving. Her loft is packed,” Brenton said, trying to divert Tristan from Colin.
“It has been weeks.” Tristan stomped his ghostly foot, and the grass tips rippled eerily away from the gravestone. “Get her in the manor.” His voice dropped an octave, and Brenton flinched.
“It’s not that simple,” Colin whispered.
“Of course it is. She needs to be in the residence before the winter solstice.”
What would be the best way to tell the demon his demand wasn’t going to get him what he wanted? Either way he might kill them, but it would be the truth. He’d have to deal with the issue and work around it. Might as well bite the bullet and tell him.
“She’s moving in after the holiday,” Brenton said, taking two treads backward. His boots crunching on the snow.
“What do you mean she is not moving in until after the holiday? I need her in before.” Tristan paced, and paced a little more.
Brenton backed up a microscopic bit more, detecting every move the demon took, and noticed Colin do the same. He tried not to stomp on any graves as he moved away from Tristan.
“Stop! Where do you think you’re going? I have not dismissed you yet,” he snarled. “And I am not going to kill you. It is not your doing she is not moving in. I can work around this hiccup. Candlemas, will work, and you will make sure Alexandria meets Lance by then.” His gaze bored into Brenton. 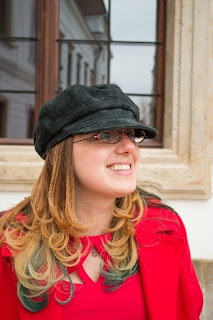 About Teresa Crumpton:
Teresa Crumpton writes dark supernatural thrillers along with poetry, non-fiction and short stories. She started writing when she was young, never thinking one day she'd turn her passion into a career. She started writing her novel in eight-grade, though it's changed over the years. Teresa’s first novel, Her Legacy, is a haunting ghost story with a little rumored family history within the pages.
Teresa obtained two degrees, Government with an Emphasis in Legal Studies, and English Lit, hoping to get into law school. In 2004 she married the man of her dreams. As they moved around the country her dreams changed. She once again went back to school, this time obtaining a Masters of Fine Arts in Creative Writing, and her writing became not only her passion, but also the fulfilment of a promise to her father before he passed.
Teresa Crumpton grew up in Cincinnati and Dallas/Ft. Worth, making her a hybrid midwest and southern girl. She has five siblings (all half or step), which always made for a boisterous Christmas while traveling.
Visit her online at:  Website | Facebook | Twitter | Pinterest