Blurb Blitz Tour w/Giveaway: Under Your Skin by Shannyn Schoroeder

Under Your Skin
by Shannyn Schoroeder
GENRE: Contemporary Romance

Shannyn will be awarding a print copy of Under Your Skin (US/Canada only) to a randomly drawn winner via rafflecopter during the tour. Please visit GoddessFish.com to follow the tour, remember the more you comment better your chances on winning. 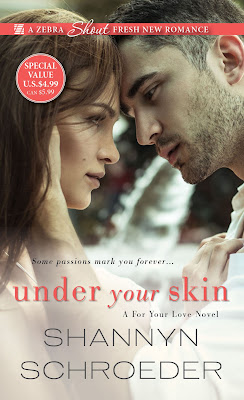 BLURB:
BLOOD IS THICKER THAN INK…
Norah O'Malley has been alone for a long time. It’s been ten years since her father and four brothers shipped her off to be raised by her aunt. Seven months since she's seen the guy who got her pregnant—who still doesn’t know. And it’s two weeks since she came home to Chicago and discovered none of her family wants to talk—or listen.
She never expected to walk into a tattoo shop seven months pregnant and get her socks knocked off by instant attraction. She can’t even see her socks. But Kai Ellis is big and gruff and sexy as hell, and if he has a past, well, so does she. Even more, Kai knows how to listen so that Norah feels just a little less alone . . .
All the chemistry in the world can’t help Norah make her decisions. And no sizzle of desire will make Kai believe in happy endings. But a little time with someone who understands might just change everything . . .

“I’m going to the store. You want me to get you anything?” Norah asked.

“Nah. I’m good.” Kai returned her smile and the tension between them dissipated.

“I’ll be a while since I have to go get books for your mom too. Do you know what kind of books she reads?” She didn’t know why she said it, but her mouth got away from her.

He shook his head.

“She reads romance. And not the longing looks from across a ballroom and maybe some hand-holding kind either.” Norah leaned a little closer and lowered her voice. “She made me read a sex scene to her last night.”

The look on Kai’s face was priceless. Even under the golden hue of his cheeks, a blush rose. “Christ, I’m sorry.”

Norah bent over on a peal of laughter. “If you could see your face . . .” Those were the only words she could handle because laughter stole her breath. She laughed until tears streaked down her cheeks. “Sorry. I just had this image of her asking you to read to her before bed.”

In truth, the deep, rumbly sound of his voice would be enough of a turn-on regardless of the words he read. Suddenly, she wanted the audiobook of that.

“Sorry,” she said again and they both knew it was an empty apology.

This book was a delight to read, at first I wasn’t for sure if I was going to like it especially being a single mom in my early 20’s & never thought once about giving any of my kids up. But the more I read the more I understood Norah’s decision, at first I was like really (sarcastically) especially how Norah wasn’t upset when she gave birth to her child & handed it over to her adoptive parents but later I was truly feeling for her.  The way she went after Kai had me yelling go girl, & Kai don’t even get me started on him I was really really liking him & then he did his crap I just wanted to go through the book & wring his neck, shake some sense into him & tell him your past is your past.  Kai’s mother Lani, she was a hoot, any girl would want her for mother of her boyfriend, she had me in stitches. If you are looking for a fast pace romance then this isn’t it, Under Your Skin was a slow pace romance, with Kai fighting his feelings for Norah all the way. Thank you to Goddess fish for the opportunity to read & review Under Your Skin.

Shannyn Schroeder is a former high school and middle school English teacher. She holds a BA in English and MAs in Special Education and Gifted Education. She currently works as an editor for an education company and juggles writing around her kids’ schedules. In her spare time, Shannyn loves to bake and watches far too much TV, especially cop shows. She started her first book on a dare from her husband and has never looked back. She came to reading romance later than many, but lives for the happy ending, and writes contemporary romance because she enjoys the adventure of new love.