Lori Foster's fantastic contemporary romance, DON'T TEMPT ME, is a story of how love comes along when you least expect it. Be sure you order this amazing standalone novel today!

"Don't Tempt Me is a sweet, fast read about finding family, love, and more! You can't go wrong with this book! It’s a must read!"—Night Owl Reviews 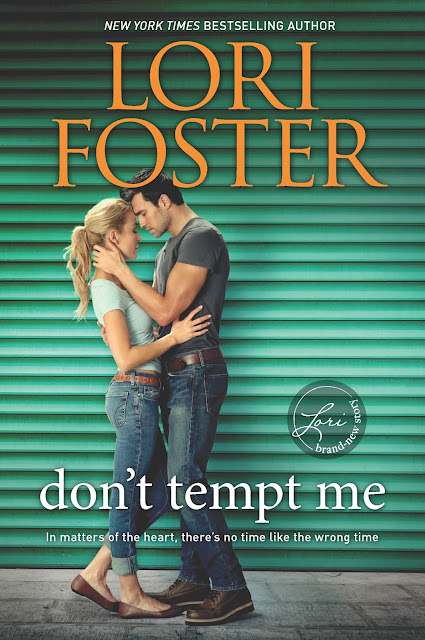 Jason Guthrie has no time for entanglements—between helping out his widowed brother and teenage nephew and getting his hometown back on its feet, his days are spoken for. But his nights are another story… And when his lovely new neighbor, Honor Brown, reluctantly accepts his help in remodeling her house, Jason finds himself wishing his handyman skills could knock down the defenses she keeps building around herself.

Martial arts teacher Sullivan Dean knows real danger when he sees it—even when it takes the form of the gorgeous blonde helping her friend move in across the street. After putting his wayward past behind him to focus on teaching control to troubled kids, Sullivan has learned to avoid party girls like Lexie Perkins. But Sullivan can’t seem to keep his hands off the real woman behind that flirty charm—or keep his heart from landing at her feet…


Add it to your Goodreads Now!

Hogan the blue-eyed dad, Colt the mature-looking son and Jason…the far-too-hot shirtless hunk. As she committed the names to memory, Honor glanced at each of them, but repeatedly got drawn back to Jason.
The sun highlighted the cut of his cheekbones, the straight line of his nose and across those sleek, hard shoulders. Why didn’t he put on a shirt? She couldn’t quite keep her gaze from his chest, noting he had just the right amount of dark chest hair going from one well-defined pec to the other then bisecting his body downward…
It wouldn’t kill the man to pull up his well-worn jeans, either. Being healthy and female and, okay, more than a little sex starved, she automatically tracked the treasure trail leading down his abdomen to inside those low-slung jeans…
“Hogan and Colt live here, too,” Jason said while silently accepting her scrutiny.
Busted again. She cleared her throat and got her eyes to focus back on his face. “I see.” To Hogan, she asked, “You and your wife are in the neighborhood?”
Pushing away from the truck, Hogan said, “Colt’s mother is gone.”
That left her floundering. Did he mean…dead? Should she give condolences?
Or maybe he meant she’d moved away.
“For now,” Hogan continued, “we live with Jason.”
Oh. With him. In the same house.
All three of them—right next door to her.
Saving her from the awkward silence, Lexie took over. “I’m Lexie Perkins, and the new homeowner here is Honor Brown.” Then to Jason, she added, “You’re going to make her faint if you don’t let up.”
“Lexie!” Horrified, Honor felt so much heat in her face it nearly singed her. She’d gag her friend if she didn’t stop with the outrageous behavior.
Jason cocked a brow but didn’t look away.

About Lori Foster: Since first publishing in January 1996, Lori Foster has become a USA Today, Publisher’s Weekly and New York Times bestselling author. Lori has published through a variety of houses, including Kensington, St. Martin’s, Harlequin, Silhouette, Samhain, and Berkley/Jove. She is currently published with HQN. Visit her online at LoriFoster.com.