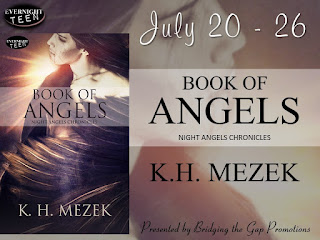 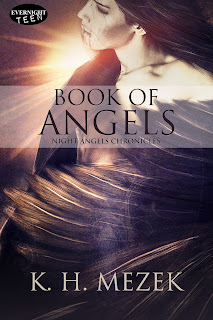 All Sera ever wanted was to solve the mystery of her dad’s death and find out whether or not the Night Angel, Peter, really loved her. Now, there are bigger issues at stake. After being saved from death by the Night Angels, Sera returns to Oak Haven to find her brother, Salem, has been saved by her nemesis, the sinister Los Angeles mayor-to-be, Fabian Gore. Sera and her brother meet again in their hometown of Oak Haven as powerful denizens. And as enemies. Someone is channeling power to the Queen, imprisoned in St. Catherine’s Monastery. If she escapes, the Ancient Ones will rise up from their sarcophagi beneath churches throughout the world and wreak vengeance on denizens and humans alike.

To thwart the Queen, Sera has no choice but to form an uneasy alliance with Gore. Meanwhile, Sera’s power and her connection to the Key of Mystery is growing. Only she can open the Book of Angels. But whoever does that will become something that Sera never wants to be: the Seventh Angel. How can Sera solve her own problems when everyone else wants her to solve their problems as well?

14+ due to adult situations 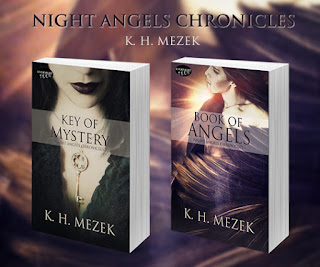 About the Author:
Karen Hunt aka KH Mezek is the author and/or illustrator of nineteen children’s books and numerous essays and short stories. 'Reflections from Istanbul,' an excerpt from her childhood memoir, won the 2015 New Millennium Writings Nonfiction Award. She is the co-founder of InsideOUT Writers, a creative writing program for incarcerated youth in Los Angeles, and the founder of the MY WORLD PROJECT, connecting youth in remote areas around the world through art and writing. She is a 2nd degree black belt in Tang Soo Do, a first degree brown belt in Eskrima, and a boxing and kick-boxing trainer. As a child, she and her family escaped out of Egypt right before the 6 Day War, lived in a 17th century castle in Switzerland and smuggled Bibles into communist countries, to name a few of her adventures. As an adult, she continued her adventures, living between London and a village in Yugoslavia. Key of Mystery and Book of Angels, volumes one and two in the NIGHT ANGELS CHRONICLES, are published with Evernight Teen.