All In
by Simona Ahrnstedt
GENRE: Contemporary Romance

Simona will be awarding a print copy of ALL IN (US/Canada only) to a randomly drawn winner via rafflecopter during the tour. Please visit GoddessFish.com to follow the tour, remember the more you comment better your chances on winning. 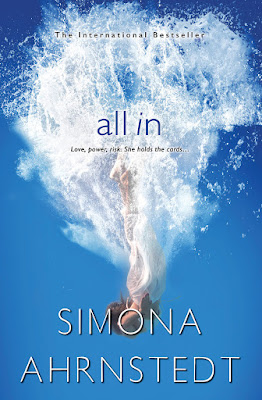 In the cutthroat world of Sweden’s financial elite, no one knows that better than corporate raider David Hammar. Ruthless. Notorious. Unstoppable. He’s out to hijack the ultimate prize, Investum. After years of planning, all the players are in place; he needs just one member of the aristocratic owning family on his side—Natalia De la Grip.

Elegant, brilliant, driven to succeed in a man’s world, Natalia is curious about David’s unexpected invitation to lunch. Everyone knows that he is rich, dangerous, unethical; she soon discovers he is also deeply scarred.

The attraction between these two is impossible, but the long Swedish nights unfold an affair that will bring to light shocking secrets, forever alter a family, and force both Natalia and David to confront their innermost fears and desires.

“No, I am busy. And I would never dream of trying to avoid you. You’re my best friend. Although I do have other friends, you know. Maybe tomorrow? My treat.”

“Busy doing what, if I might ask?” Åsa said, not letting the possibility of a free lunch tomorrow distract her.

Natalia didn’t say anything. She looked down at her buried desk. Now would be a good time for one of her phones to ring, or maybe the fire alarm could go off, she thought.

Åsa’s eyes widened as if she’d had a realization. “Aha, who is he?”

Åsa’s eyes narrowed to two turquoise slits. “But you’re acting so weird, even for you. With who?”

Natalia pressed her lips together.

Natalia gave up. “With someone from, um, HC.”

Åsa furrowed her light eyebrows. “With who?” she stubbornly demanded. She might have made a good cult leader, but she also would have made a terrific interrogator, Natalia thought. All that blond bimbo fluff was misleading.

“It’s just a business lunch,” she said defensively. “With no agenda. He knows J-O,” she added as if the fact that her lunch date knew her boss explained everything.

Åsa leaned back and beamed at Natalia. “The big guy, huh?” she said. “Mister Venture Capitalist himself. The biggest bad boy in the financial world.” She cocked her head. “Promise me you’re planning to sleep with him.”

“You’re crazed,” Natalia said. “Sex-crazed. I actually wish I could cancel it. I’m really stressed out. But one of the things I can’t find in this mess is my cell phone, which has his number on it,” she added. How could you lose a phone in an office that was smaller than forty square feet?

“But for God’s sake, woman, why don’t you get yourself an assistant?”

“I have an assistant,” Natalia said. “Who, unlike me, has a life. Her kids were sick, so she went home.” Natalia glanced at the clock. “Yesterday.” With a sigh she sank into her desk chair. She closed her eyes. She couldn’t look anymore. She was really done. It felt like she’d been working nonstop for ages. And there was so much paperwork she was behind on, a report to write, and at least five meetings to schedule. Actually she didn’t . . .

Åsa’s voice made her jump, and Natalia realized she’d been dozing off in her uncomfortable chair.

Åsa looked at her seriously. Her mocking expression was gone.

“Hammar Capital isn’t evil, no matter what your dad and your brother think. They’re tough, yes, but David Hammar isn’t Satan. And he’s really hot. You don’t need to be ashamed if you think it’ll be fun to meet him.”

“No,” said Natalia. “I know.” But she’d been wondering what Hammar Capital’s legendary CEO wanted with her. And maybe he wasn’t Satan, but he had the reputation of being hard and inconsiderate even by financial industry standards. “No, I’m just going to have lunch and get the lay of the land,” she said firmly. “If he has business with the bank, he’s going to want to deal with J-O, not me.”

“But here’s the thing. You never know with Hammar Capital,” Åsa said, gracefully standing up. “And you’re underestimating yourself. Do you know anyone as smart as you? No, exactly.” She ran her hand over her completely stain- and wrinkle-free outfit. Even though she was wearing an austere suit (Natalia happened to know that this specific Prada suit had been tailor-made for Åsa), a simple silk blouse, and light-beige pumps, she looked like a glamorous movie star.

Åsa leaned over the desk. “You know very well you shouldn’t care so much what your father thinks,” she said, as usual putting her finger right on the sore spot and pushing. “You’re brilliant, and you’re going to go far. You can make your career here.” Åsa gestured to the building they were in, the Swedish headquarters of one of the world’s biggest banks, the Bank of London. “You don’t have to work at the family company to be worth something,” Åsa continued. “They have the world’s least progressive view of women’s rights and you know it. Your dad is hopeless; your brother is an idiot, and the rest of the board wins the male chauvinist pig prize of all time. And I should know, because I work with them.” She cocked her head. “You’re smarter than all of them put together.” 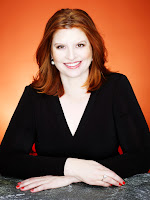 Simona Ahrnstedt was born in Prague and is a licensed psychologist, a cognitive behavioral therapist, and most importantly, a bestselling author. As her novels have swept bestseller lists in her native Sweden, she has become a spokesperson for books by women, for women, and about women. Her provocative women’s fiction has been sold in multiple languages as well as audio format. She lives outside of Stockholm, Sweden, with her two teenagers.