Virtual Tour w/Giveaway: Only An Earl Will Do by Tamara Gill

Henry is determined to make the only woman who captured his heart his wife. 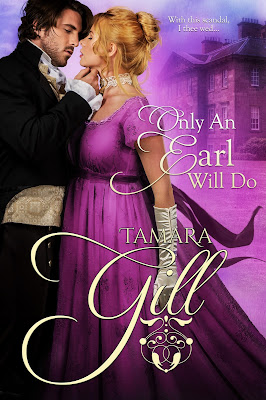 ONLY AN EARL WILL DO
To Marry a Rogue #1
Tamara Gill
Releasing July 25th, 2016
Entangled Select Historical

The reigning queen of London society, Lady Elizabeth Worthingham, has her future set out for her. Marry well, and marry without love. An easy promise to make and one she owed her family after her near ruinous past that threatened them all. And the rakish scoundrel Henry Andrews, Earl of Muir whose inability to act a gentleman when she needed one most would one day pay for his treachery.

Returning to England after three years abroad, Henry is determined to make the only woman who captured his heart his wife. But the icy reception he receives from Elizabeth is colder than his home in the Scottish highlands. As past hurts surface and deception runs as thick as blood, so too does a love that will overcome all obstacles, unless a nameless foe, determined with his own path, gets his way and their love never sees the light of day...

Elizabeth hid a repulsed shudder over Lord Riddledale, who stood pompous and proud across the floor, the ever-present scowl on his face no surprise. No doubt her stepping out with another gentleman other than himself had put him out of countenance. She turned back to her sister. “I cannot summon any remorse for annoying Riddledale. As for Lord Dean, I’ll be sorry to hurt him, but no, I will not marry him no matter how much his heart breaks over my decision.”
“Could your feelings change in time, do you believe?” Victoria asked.
“No.”
“No?”
Elizabeth shook her head. “No.”
“Why?”
She swallowed the familiar lump which formed in her throat every time she thought of him, the man she refused to name, even in her own thoughts. “I’m not the loving kind. I don’t believe it’s healthy to rely on such feeble unstable emotions when someone is entering the marriage state. Men and their need to be adored, looked up to in awe, can go hang. Lord Newland’s name protects me now. I have no need to marry again.”
Victoria threw her a dubious look. “I believe there is nothing purer and good than love, especially if you are fortunate enough to have it in a marriage.” Her sister sighed, the sound tinged with sadness. “You promised Papa you would try.”
“I am well aware of what I promised Papa, but he did not stipulate marriage is what I should try. I’m friendly and affable. That is enough.”

Q & A with Tamara Gill
.
What books/authors have influenced your writing?
Stephanie Laurens, Anna Campbell, Karen Marie Moning, Mary Balogh, there are too many to name.

Have you ever had one character you wanted to go one way with but after the book was done the character was totally different?
I have this happen quite a lot, and I blame being a panster writer and unable to plot to save my life. If I write a synopsis I rarely follow it in the end. My characters often take turns I wasn’t expecting or do something which takes the plot in a different direction. But I love that. It makes writing fun.

If you could write in another genre what would it be & why?
I’ve written mythological romance, and have a series out now about gods and goddesses. I also write time travel romance, which I adore.

What’s you next project?
I’m working on a Scottish time travel romance series, book one TO CONQUER A SCOT is complete, and book two, TO SAVE A SAVAGE SCOT is coming along quite well. I’m also working on a Regency romance series proposal for my agent. Having written all that I sound quite busy!

What was your favorite part or line from this book?
I love the dark moments in all of my books the most. I love that severing of love and all the feels you get when reading the worst part in the book. And ONLY AN EARL WILL DO doesn’t disappoint with the one I wrote for Elizabeth and Henry.

Your favorite book by you or another author.
A Stolen Season is my own favourite and is out now with Entangled Publishing. I also love Karen Marie Moning and devour all her works.

Share a funny incident in your life.
Oh wow, this is hard and for the life of me I can’t think of one, sorry. :o

Tamara Gill is an Australian author who grew up in an old mining town in country South Australia, where her love of history was founded. So much so, she made her darling husband travel to the UK for their honeymoon, where she dragged him from one historical monument and castle to another. A mother of three, her two little gentleman’s in the making, a future lady (she hopes) and a part-time job keep her busy in the real world, but whenever she gets a moment’s peace she loves to write romance novels in an array of genres, including regency, medieval and time travel. Tamara loves hearing from readers and writers alike. You can contact her through her website, and sign up to follow her blog or newsletter.