Review & Excerpt Tour w/Giveaway: Fool For You by Rina Gray

Can she go from BFF TO MRS? Find out in FOOL FOR YOU (Crush on You Book 1) from debut author Rina Gray... 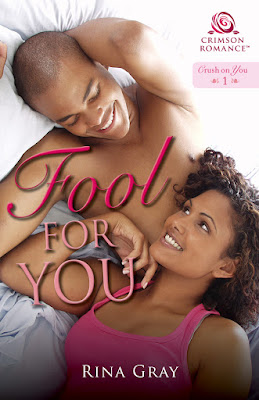 About FOOL FOR YOU
Sports journalist Melanie Foster has achieved most of her goals: Bomb.com job—check. Tomboy-to-smoking-hottie makeover—check. Convince her best friend, Damien Richards, to slide a ring on her finger and father her two-point-five kids—not so much. When she activates Operation: I’m Gonna Make You Love Me, she never imagines her BFF already has plans to stroll down the wedding aisle with another woman.
Damien is in the middle of crisis mode. The non-profit for young athletes at which he volunteers is in financial trouble. He’ll pull out all the stops to rescue the organization that saved his life after his career-ending injury—even if it means sacrificing his personal happiness.
But when he finally wakes up to love and the very non-friendly feelings he’s long held for Mel, it might just be too late. Damien must convince her that he’s worth the risk and turn the tables to show her he’s the one ready to be a fool for love.

Add FOOL FOR YOU to your TBR pile on Goodreads!
CELEBRATE THE RELEASE WITH A GIVEAWAY!
Grand Prize: 2 Winners Will Each Receive a Kindle Fire
Runner-Up: 1 Runner-Up Will Receive a $25 Amazon Gift Card

Excerpt:
She ran her fingers through her hair, exasperated by the turn in conversation. “I was a stupid girl in college. I told you how I felt, and you rejected me, patting me on the head like some little kid and then running off to your date.” She paced toward the kitchen. “Terrance is a lot of things. Back then I didn’t know it nor did you. He saw me crying on the couch and asked me what happened. Then he offered to take care of me.”

Damien watched her with a weird intensity, as if he were observing an unclassified species underneath a magnifying glass.
Despite the awkwardness, she couldn’t look away. Their silent exchange was not peaceful, but painful. A pain that manifested into a poison-tipped arrow and pierced her soul.

The tips of her fingers were numb. She rubbed her thumbs over her fingers and pulled back her shoulders, ready to kill the dead air. “Damien, I … ” Her voice box froze. Each ragged breath hardened into tiny icicles, leaving no room for words to escape. She drew a huge gulp of air and tried again. “I love you.” She licked her dry lips and corralled her courage. “I love you, and I always have. Since I was twelve years old, you’ve owned my heart. I don’t know why I did it. But he treated me like I was good enough. Like a woman.”

“Stop it!” Damien swung his hand into a ceramic vase propped on the small, round coffee table, slamming it to the floor.

“It’s the truth. And as stupid and immature and pathetic as it sounds, he made me feel wanted.”
“Shut. Up. Melanie.” This time Damien’s tone slipped into a menacing, threatening rumble. He was a man on the edge. But like a shaken bottle of soda whose top finally popped, she couldn’t stop the words from bubbling over.

“You have no idea.” She shook her head. “No idea what it feels like to burn for one person, one guy since you were a kid. And every time the guy chooses someone else, a piece of you dies. So,” she whispered, her voice hoarse and broken. “So when the guy you’ve wanted all your life, the guy you wanted to ask you to the dance, but never does, when he rejects you … but another guy, not the guy you want, but he’s nice and attractive and kind, asks you to dance, you take his hand and follow him to the dance floor.”

Her gaze fixed on the window above the kitchen sink. “You close your eyes and pretend the other guy is the one you want. And you convince yourself that it’s better than holding up the wall and staring while your guy, the one you crave, is holding someone else.”
Looking down at her feet, she rotated her ankle in a panicky rhythm. “I know you don’t love me … the way I love you. But I still stand by what I said earlier. If you continue to treat me badly, toss me away like I don’t matter, then I’d rather end it now. So what will it be?”
Her eyes sought Damien, who’d become quiet during her emotional vomit.
His bright, intense eyes swirled with something. Another something new, something she’d never seen before. Clenching his jaw, he looked down, grabbed the back of his neck, and shook his head once. Twice. He lifted his head, eyes meeting hers, and shook his head again, this time with conviction. “No. I don’t want to be your friend anymore.”
Her knees buckled, the pain too great. How she wished she could’ve loved him in silence instead of losing him forever.

She wanted … She needed … She craved …
Damien. Only and always, Damien.
Sniffling, she turned to leave. Nothing more to say. The door mocked her, telling her to make a decision. But this time, the decision wasn’t hers to make.
She twisted the knob to crack it open, but the door wouldn’t budge. Lifting her eyes, she realized the problem. His hands held the door closed above her head.
Does he want to watch me crumble?

Q & A with Rina Gray

With all my might and soul, I hate folding clothes! I have a little frown on my face as I’m typing this. The clothes seem to never end and I’m at a point now where I have to wash clothes every week.

When you are in writer mode, music or no music? If music do you have a playlist.
Definitely music. I create soundtracks for my books. I use the Shazam app on my phone when I’m out and about and find a song that I love. For my debut novel, Fool for You, I have a playlist on Spotify.

Who was your favorite hero/heroine.
Buffy, the vampire slayer. That woman kicks ass and somehow has time for sarcastic one-liners.

What’s you next project?
I’m just about finished with book #2 in the Crush on You Series – It’s Been You, an enemies-to-lovers book. I’m also working on book #3 in the series as well, and I’m about a third of the way into the book. I hope to have a finished draft in the next six weeks.

What is your favorite movie (song)?
I have two favorites. “Purple Rain” by Prince and “Faithfully” by Journey. I love anything that sounds epic and I think it’s pretty brilliant that as an artist that you’re able to convey a story that spans time and pull my emotions in less than five minutes. Also, I love songs with a nice guitar rift.

What's your favorite TV show of all time and why?
I love these questions. I asked someone this the other day and they looked at me crazy! I think it’s very telling what shows people love. So sorry, I have to give you two. One, Buffy the Vampire Slayer and second, Game of Thrones. I just love epic story lines and characters that start off one way and grows by leaps and bounds. I also love and respect that writers are able to give life and make people empathize with villains.

Clean shaven, Scruff, beard, or mustache. Ink yay or nay?
My preference is a beard or scruff. I can deal with clean shaven but if I have more hair (in my hibernation winter months) than a guy, I’m sure it’s a turn-off for both of us! Definitely yay for ink!

If you could write in another genre what would it be & why?
Horror for sure. I’m a huge fan of horror and gore---anything with vampire and werewolves. Think: Silver Bullet, True Blood, and The Underworld Series. Give me an Anne Rice and Stephen King novel and I’m good.

Rina Gray is one of the newest African American romance writers on the rise. She is also a digital marketing professional who discovered her love of writing in 2012. Writing has always been Rina’s passion, though initially, she tried to deny it. In college she served as the copy editor for the entertainment magazine and newspaper. During her tenure, she had the opportunity to interview various talented entertainers including Chris Rock and the cast from Reno-911.

Rina has always been an avid reader, sneaking to read her mother’s books she had no business reading i.e. Stephen King’s The Stand, It, and Anne Rice’s various vampire series. As a pre-teen, she received a load of romance novels from a family friend and from that point on, she devoured any book related to romance or horror. When she’s not writing, she can be found with her head stuck in a book, kickboxing, or dominating game night with friends and family. Rina resides in Atlanta with her husband.