This is my stop during the blog tour for Iron Goddess by Dharma Kelleher. This blog tour is organized by Lola's Blog Tours. The blog tour runs from 18 till 31 July, you can view the tour schedule here. 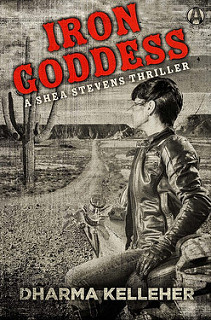 Blurb:
In this gritty, fast-paced debut thriller, an ex-con biker chick turned law-abiding citizen risks everything to save her new lifeâ€”and confront the demons of her past.

Shea Stevens is biker royalty. Her father was the president of the Confederate Thunder Motorcycle Club. Under his watchful eye, she learned how to pick locks, disable alarms, and hot-wire cars like a pro. But all that is ancient history. Or so she thought . . .

After a stint in prison, Shea has worked hard to make a quiet, happy life for herself in Arizona. She spends her time bonding with her big-city girlfriend and running her bike shop, Iron Goddess Custom Cycles, with her dedicated team of misfits. But when one of her employees is shot and three of her specially commissioned bikes are stolen, Sheaâ€™s new life collides with the criminal underworld she tried to leave behind.

Shea knows better than to trust the police. So, with her Glock on her hip, she takes the investigation into her own hands. Sheaâ€™s search for the bike thieves leads her straight to her fatherâ€™s old gangâ€”and her estranged sister, whose young daughter has been kidnapped by a rival club. The last thing Shea wants is to be caught in the middle of a warâ€”but if she learned one thing from her old man, itâ€™s that when someone comes at you, you push back. Hard. And thatâ€™s exactly what sheâ€™s going to do.

You can find Iron Goddess on Goodreads

Q & A with Dharma Kelleher

What books/authors have influenced your writing?
One of my earliest faves is Lawrence Block. I’ve been a fan of both his Bernie Rhodenbarr series and his Matt Scudder series for decades. Some more recent influences have been Jim Butcher, Stieg Larsson, and Christa Faust.

Tell us something you hate doing. Why?
Marketing. I know how essential it is, especially as an author, but I suck at it. I love talking with people and getting to know them, but anytime I’m really trying to sell myself or my work, I get uncomfortable.

Share a funny incident in your life.
About 18 years ago, a group of my friends were planning to go out to dinner. At the last minute all but me and this other woman canceled. Turned out that the two of us had been set up by the others on a date. I married her about six months later.

What's your pet peeve?
Bigotry. I don’t care who someone is or how talented they are, if they say or do something that’s racist, sexist, homophobic, or transphobic, I am done. Mean people suck.

When you are in writer mode, music or no music? If music do you have a playlist?
I often like to listen to music, but it has to be instrumental only. Lyrics make writing difficult because it literally causes collisions in my brain. I have one playlist with a soundtracks from a lot of dark movies like Taken, Batman Begins, and The Maze Runner because it gets me in a dark mood.

Who was your favorite hero/heroine.
Lisbeth Salander from Stieg Larsson’s Millennium series. She’s brilliant, tough, fearless, and doesn’t give a f*ck what other people think.

Have you ever had one character you wanted to go one way with but after the book was done the character was totally different.
Sort of. I have two characters that I’ve been trying to get together romantically, but so far it hasn’t happened yet. Maybe in Book #3 of the series.

What’s you next project?
I am editing the sequel to Iron Goddess. Shea Stevens, the protagonist from the first book, is forced to infiltrate an all-women’s motorcycle club as a confidential informant looking for someone dealing lethal club drugs.

What's the one thing, you can't live without?
I have to say my motorcycle. It’s the only way to fly.

What is your favorite movie (song)?
“F*cking Perfect” by P!nk. The video gets me bawling every time. It’s a song of empowerment and honoring our self-worth.

What's your favorite TV show of all time and why?
Sons of Anarchy. Not surprising since I am a biker and write about bikers. But Kurt Sutter did such a wonderful job bringing to life such complex characters. It’s dark and brutally violent, but there is so much humanity in the show. I love it.

Clean shaven, Scruff, beard, or mustache. Ink yay or nay?
Well, this opens up a whole can of worms. I’m a transgender pansexual with lesbian leanings.

I’ve made out with guys with and without facial hair. I hate scruff because it’s so abrasive. So when it comes to guys, I prefer either all or nothing. That said, I’m happily married to my wife of 18 years, so the question’s kinda moot. As for ink, I think tats are cool. I have four myself and my wife got her first one just last year. My dream tat is a vine that starts at my wrist and winds all over my body with either a flower or faerie for every year I’ve been sober. Today’s my 20th sobriety birthday. So that’s a lot of ink.

Your favorite book by you or another author
I have so many favorites and it’s always changing. I just read an advanced reader copy of The Last One by Alexandra Oliva and it blew me away. It’s about a woman who participates in a wilderness survival reality show. But things go very wrong and the lines between reality and reality TV get blurred. The characters are wonderful and the tension is palpable. I stayed up half the night finishing it, which is a rarity for me.

If you could write in another genre what would it be & why?
Urban fantasy. I have some ideas for some stories that I’ve partially explored and would love to spend more time with in the future. One is about the Mexican/Aztec legend of La Llorona. Another is about werewolves that started out as wolves, but were given the gift of transforming into humans as a means of survival against hunters and loss of habitat. 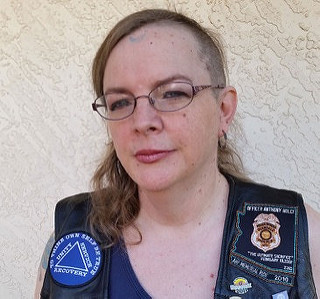 About the Author:
Dharma Kelleher writes gritty tales about outlaws, renegades, and misfits. Her hobbies include riding motorcycles, picking locks, and getting inked. Her debut novel IRON GODDESS will be published by Penguin Random Houseâ€™s Alibi imprint on June 28, 2016. Learn more about her and her writing at dharmakelleher.com.

Giveaway
There is a tour wide giveaway for the blog tour of Iron Goddess. This giveaway is US and Canada only. Below are the prizes you can win:
- a 25$ amazon gift card
- earplugs with the Iron Goddess shop logo

For a chance to win enter the rafflecopter below:
a Rafflecopter giveaway