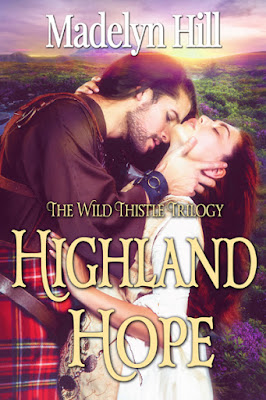 “Remember, lasses. Through Hope, Faith and Honor, ye can rule,” were the last words Lady Laird Hope MacAlister’s father spoke before dying. Those very words direct her every action and thought. Sword fighting and leading the men of her clan is second nature to Hope and she has little time for herself or any thoughts of love. Until Aidan MacKerry is captured spying on the clan.

She is beautiful, strong, and quick to pull a sword. But when he kisses her, all thoughts of the Lairdship flee his mind. When the enemy continues to undermine Laird MacAlister, Aidan is determined to aid her—only he didn’t think he’d lose his heart to the Laird of Wild Thistle Keep. When the enemy reveals Aidan’s secret, he must fight for his right as laird and prove despite their differences, he loves Hope.

The enemy refuses to back down and continues to threaten not only Hope, but the security of the entire clan. Only together will they be able to save the clan and save their love.

She sighed and set her free hand at her waist. “We need to find my sister, not stand her havering.”


Sadness and worry flitted in her gaze. Heartache over her mother he assumed and mayhap a wayward sister. The grief seemed to consume her as they walked and Aidan loathed to see a sad woman—even if it was Laird Hope MacAlister. If she started crying he’d certain flee, for nothing was worse than consoling a woman in tears. But he doubted she’d show such vulnerability to him.
She glanced toward the other caves and then back toward the keep. She gave a frustrated sigh. Her face soft with desperation to find her sister. She was worried and inside she was fretting and he knew only one way to take a woman’s mind off her troubles.
He stepped toward her and swept her in his arms. Her eyes widened as he descended, slowly so not to make her skittish, but with enough purpose she knew his desire. Her lips parted and her tongue darted out quickly to wet the plump surface. His lips brushed against hers with a soft caress. She gripped his arms and pushed. He kissed her again, slanting his mouth over hers. She stiffened, then her fingers dug into his biceps as her lips relented, accepted his kiss. As a moan escaped her lips, masculine triumph flared and he delved deeper. A sizzling leap of lust cursed through him. God, she felt good in his arms. Aidan ripped his mouth from hers and narrowed his gaze. His chest heaved. His blood sang. Through hooded eyes, he watched her and inhaled the womanly scent about her. Hope’s face was flushed, her eyes glazed. Aidan reached for her again.
With a flick of her wrist, a dirk appeared from its sheath and pressed against his ribs. “You touch me again, and you’re a dead man.”

Madelyn Hill has always loved the written word. From the time she could read and all through her school years, she'd sneak books into her textbooks during school. And she devoured books daily. At the age of 10 she proclaimed she wanted to be a writer. After being a "closet" writer for several years, she sent her manuscripts out there and is now published with Soul Mate Publishing. And she couldn't be happier!

A resident of Western New York, she moved from one Rochester to another Rochester to be with the love of her life. They have 3 children and keep busy cooking, avid movie goers, and of course reading!