Kate Brandes will be awarding a $25 Amazon/BN GC to a randomly drawn winner via rafflecopter during the tour. Please visit GoddessFish.com to follow the tour, remember the more you comment better your chances on winning. 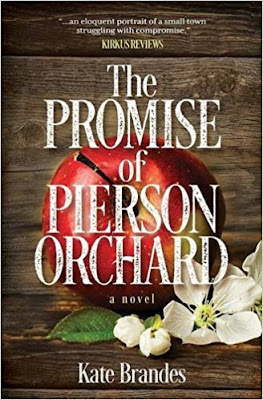 In the novel, Green Energy arrives, offering the impoverished rural community of Minden, Pennsylvania, the dream of making more money from their land by leasing natural gas rights for drilling. But orchardist, Jack Pierson, fears his brother, Wade, who now works for Green Energy, has returned to town after a shame-filled twenty-year absence so desperate to be the hero that he’ll blind their hometown to the potential dangers. Jack also worries his brother will try to rekindle his relationship with LeeAnn, Jack’s wife, who’s recently left him. To protect his hometown and to fulfill a promise to himself, Jack seeks out his mother and environmental lawyer Stella Brantley, who abandoned Minden—and Jack and Wade–years ago.

When LeeAnn’s parents have good reason to lease their land, but their decision leads to tragedy, Jack must fight to find a common ground that will save his fractured family, their land, and the way of life they love.

The barn sat at the end of a long lane. Gray, weathered wood lit by a single pole light. Only the cars parked in the grass on Thursdays differentiated it from any other barn. Inside the smells were not of hay and animals, but the stink of sweat and adrenaline, stale beer and cheap perfume. Two spotlights illuminated the ring, which was bordered by a rectangle of straw bales and surrounded by metal folding chairs five deep.

The crowd included a few girlfriends, but mostly men coming to watch and bet on what they were too afraid to try themselves. Jack didn’t know or care why the other fighters came. Fate brought him to this barn to fight.

Some sat and others stood, money and beer cans in hand. Two young kids were at it in the ring. Both fighters were so intent on not getting hurt that they took more of a beating than necessary. The blonder one favored his right side, probably because of a previous punch to the ribs. Another left jab would finish him. And the darker-haired boy couldn’t see well out of his right eye, making him wide open on that side. These two were here for the money, paid to fight by the guy who owned the barn. But Jack wasn’t there for cash.

Rage sheltered in him, like it did in anyone. Except his had been drawn to the surface by love held out of reach.

He looked for the John Deere hat and headed toward Bob, the man who owned the barn, ran the fights, and, judging by his belly, drank most of the beer. Jack told Bob who he wanted to fight. Bob would do what he said. Jack was the reason people came.

Q & A with Kate Brandes

For me it was learning how to tell a story. This is my first novel and when I started it I was relatively new to creative writing since I’ve spent my career working as an environmental scientist. So I had to learn everything about telling a story in the form of a novel. I’m still learning about it. Writing is a life-long apprenticeship.

I enjoyed the discovery over time of what the book was really about. It took many years of writing to get there and it was a bit like an archeological dig where the story was revealed one small artifact at a time. Now I’m looking forward to hearing how other people see and feel about the story and characters.

The natural world and the rural perspective inspires me. My favorite characters to write are broken but courageous people who are trying to find their way.

I tend to prefer spare writing and I love stories about family drama and small towns. I also like nature themes. Kent Haruf, Richard Russo and Barbara Kingsolver are all writers I admire and hope to learn from by reading their work.

I have a new novel in the works. It’s another book club fiction with an eco bent, partly inspired by Edward Abbey’s Monkey Wrench Gang.

An environmental scientist with over 20 years of experience, Kate Brandes is also a watercolor painter and a writer of women’s fiction with an environmental bent. Her short stories have been published in The Binnacle, Wilderness House Literary Review, and Grey Sparrow Journal. Kate is a member of the Arts Community of Easton (ACE), the Lehigh Art Alliance, Artsbridge, the Pennwriters, and the Women’s Fiction Writers Association. Kate lives in a small town along the Delaware River with her husband, David, and their two sons. When she’s not working, she’s outside on the river or chasing wildflowers.