Will they be able to survive her insecurities and the scrutiny of their friends and family?

Follow the reveal and enter to #win an Oceanside Marine prize pack including a paperback copy of the book, $50 Amazon GC, adult coloring book, and Kate Spade clutch! 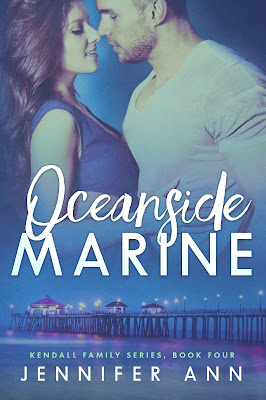 Fresh out of the Marine Corps, Braden Kendall has settled into a comfortable routine in SoCal with his 3-legged dog and a handful of good friends. Despite being undeniably handsome and perceived as a lady’s man, he’s lonely and tired of meaningless hookups. After becoming pregnant in her teens, Katie Walker dedicated her life to raising her two sons, putting any romantic notions aside until they flew the nest. Now that she’s on her own and free to date, she struggles with putting her needs first.

Though Katie and Braden aren’t related by blood, their families are intertwined by marriage, making a relationship seem forbidden. Katie always found the cocky Marine attractive, but their considerable age difference made him off limits. Little does she know, Braden has been crushing on her for years and can’t get enough of her quirky personality. When they meet up in Vegas for a family celebration, Braden offers to show her a good time unmatched by anything she’s experienced. Once Katie decides she wants more of what he’s offering, can she survive a judgmental society, her insecurities, and the scrutiny of those closest to her?

Find out more at: Goodreads | Amazon 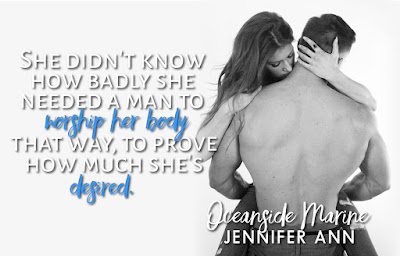 Though it’s been over twelve hours since I grabbed a breakfast sandwich in the Newark airport and my angry stomach sounds downright demonic, I’m too tired to go through the motions of ordering a meal. I simply want to soak in the suite’s giant corner tub and pass out in the king bed. I’ll be amazed if I have enough energy to either throw on pajamas, or even pull back the luxurious bedding.

But the moment I round the corner to my hallway, I’ve never felt more awake.

Waiting outside my room.

I almost trip over my feet as I continue toward where he sits on the floor, head tipped back against the wall, eyes closed, thick arms slung over his knees. He’s not wearing anything special—a worn AC/DC t-shirt, faded blue jeans, and canvas flip-flops—but he’s so beautiful that I briefly wonder if I’m hallucinating from lack of sleep and starvation. With the sight of his protruding Adam’s apple and the dark scruff lining his thick jaw, the temptation to lick his neck becomes wicked strong. A bolt of desire strikes between my legs.

Gently nudging his calf with my bare foot, I call his name. He rouses slowly, wiping a hand over his face before his russet eyes focus on me. A brilliant smile spreads over his soft lips. The same lips that reminded me how it felt to truly be alive.

Face turning hot with his compliment, I fold my arms over my stomach. “What are you doing here? How’d you know I was in California?”

“Ev called a couple of hours ago, said you could probably use some company after what would likely be a hellacious day.” He pushes off his hands to stand. “No offense, but it looks like she was right. Have you grabbed supper yet?”

I nearly roll my eyes with the term supper. He sounds just like his sister. “No, I figured it’s too late. Between work and the long flight, I’m exhausted.”

“There’s a place around the corner that has killer fish tacos. I could grab some while you’re taking a bath.”

His hands disappear in his jean pockets and his chest strains against the cotton of his shirt. How I stop myself from running my hands across the valley of muscles is a mystery more complex than the Bermuda triangle. And when I picture myself naked in the tub with him in the next room, moisture pools between my legs. My body still wants him regardless of whatever my overactive imagination thinks.

“I guess I could stay up long enough for tacos,” I decide with a soft sigh. “But I’d rather eat at the restaurant. If I take a bath right now, I’ll be done for the night.”

His adorable dimples pop into place when his smile grows. “You won’t regret it. They’re legendary out here.”

But he’s dead wrong. I’m already regretting any decision that doesn’t involve sending him home and locking myself in the room.

About Jennifer Ann:
Jennifer Ann is the author of nine contemporary romance novels with complex love stories. Like her characters, she's in love with the city of New York, trips on airplanes or the back of her husband's Harley, and everything rock and roll. Sometimes you can catch her driving a tractor alongside her husband in southern Minnesota while trying to keep up with the madness of their four active children.


Follow the tour and enter to #win an Oceanside Marine prize pack including a paperback copy of the book, $50 Amazon GC, adult coloring book, and Kate Spade clutch.