Emily Mims will be awarding a  $10 Amazon or Barnes and Noble GC to a randomly drawn winner via rafflecopter during the tour. Please visit GoddessFish.com to follow the tour, remember the more you comment better your chances on winning. 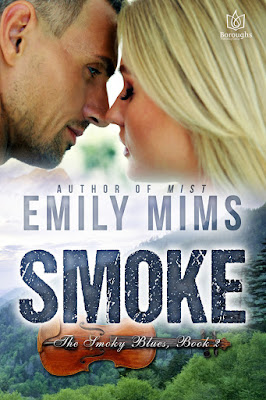 A concert violinist and musical prodigy, Francesca Giordano is internationally acclaimed and always in the spotlight—right where she doesn’t want to be. Not after she’s witnessed a murder. Suddenly on the run, she finds her way to Bristol, Tennessee, and to the music club Acoustics. There, as “ Chessie Hope,” she can hide out in the open. But with this newest gig comes a different kind of danger. Older and impossibly sexy, bluegrass singer Cooper Barstow is everything she’s ever wanted in a man, and his daughters are just as easy to love. Yet Francesca cannot enjoy the luxury of such a relationship, not even if he could protect her from the men on her trail or if she could be honest with him about who she is. Cooper is as wounded as he is strong, and he needs someone who will stay by his side for the rest of his life. Just as Francesca does. And the smoke on the mountains and the haze of desire almost make her believe that could happen.

Cooper hit his front door and took the quickest shower on record. Still, he was almost a half hour late by the time he pulled into Chessie’s driveway. Hopefully she would understand. He was about halfway across the yard when he heard music coming from somewhere inside the house. He slowed down and stopped, listening in astonishment to the outpouring of a violin, a violin in the hands of an incredibly gifted musician. Who was playing the violin? Was Chessie a closet classical music fan? Was that a recording, or was that Chessie herself making this incredible music?
Cooper glanced in the window and his mouth fell open. It was Chessie. She was standing in front of the window in her pink cotton robe, her fingers flying over the strings so fast they were a blur and her bow moving nimbly over the strings as she made that violin sing. It was Chessie making that incredible music. Music that Jake never in a million years could have made. Music that he himself could never have made. Music that required more talent and technique that she would ever need as a bluegrass fiddler. Music that somehow seemed strangely familiar, even though he didn’t think he’d ever heard it before. Cooper suddenly thought back to his initial reaction to her, the first time he heard her play. He wondered then why a woman of her talent played bluegrass music.

Now he knew. She didn’t play just bluegrass music. She played classical music too. And she played it wonderfully.

Chessie Hope was not the simple bluegrass musician she presented herself to be.

Q & A with Emily Mims

Getting the ‘bad guys’ right. I originally had them Mafia, but my beta reader pointed out that Francesca would never be safe from them. I had to recreate a scenario in which she would be safe after she testifies.

Imagining that I’m a fiddler! I play some of the other instruments depicted in the stories, but not the fiddle.

I don’t get writer’s block when I’m doing the actual writing, because I have a detailed synopsis to work from. Sometimes writing those synopses are a real challenge, and I just have to walk away for a while and let the story churn in my subconscious.

I can’t think of one offhand. Since my books are tightly plotted ahead of time, my characters tend to stay ‘in character’. 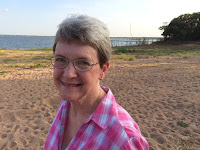 Author of thirty romance novels, Emily Mims combined her writing career with a career in public education until leaving the classroom to write full time. The mother of two sons and grandmother of six, she and her husband Charles live in central Texas but frequently visit grandchildren in eastern Tennessee and Georgia. She plays the piano, organ, dulcimer, and ukulele and belongs to two performing bands. She says, “I love to write romances because I believe in them. Romance happened to me and it can happen to any woman-if she’ll just let it.”
Social Links:
Website  Facebook  Twitter
~~~~~~~~~~~~~