Enter below for a chance to win magnet & key chain
(items in the picture) from N. J. Walters 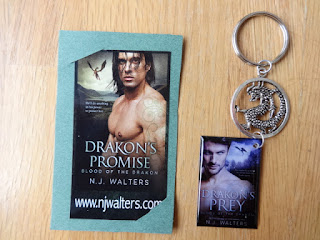 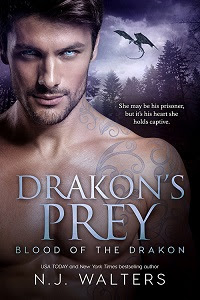 Valeriya Azarov turned her back on the family business to write and illustrate children’s books. But with a sister who leads the Knights of the Dragon, it’s impossible to get away from the secret society whose mission is to destroy and enslave dragons. When information falls into her hands along with the opportunity to save at least one of the ancient creatures, she can’t turn away any longer.

When a woman moves into the cabin above Tarrant Cooper’s secret underground lair, he’s both suspicious and intrigued. He hasn’t lasted four thousand years being careless, so when he suspects her of being a part of the Knights, the plan is to kidnap her and find out how much the organization knows about him and his brothers.

He’s drawn to Valeriya, but trusting her could get him killed. Even if she’s a pawn in the war between drakons and Knights, giving her his heart would mean forever.

Tell us about Drakon's Prey.

Drakon’s Prey starts shortly after the end of Drakon’s Promise. The Knights of the Drakon are still looking for Tarrant’s brother and that leads Valeriya Azarov, the sister of the leader of the Knights of the Dragon, to the doorstep of his private lair. Only she doesn’t realize it. He kidnaps her, figuring to use her either for information or as a pawn in the war, but things don’t work out exactly as he plans.

What initially inspired you to write Drakon's Prey?

Drakon’s Prey is the second book in my Blood of the Drakon series. There are four drakon brothers—half-brothers really, same dragon sire, but different mothers—and Tarrant’s story picks up just after the end of Drakon’s Promise. I’d been wanting to write a dragon, or rather drakon, series for years. The time was finally right and I’m having so much fun writing it.

Tell us little about the characters in Drakon's Prey.

Tarrant is everything you’d expect a drakon to be. He’s mistrustful and prefers to be left alone. He also likes to collect things—it’s the dragon side of his nature. And what he collects is information. He’s wicked smart, the best hacker in the world, and a complete loner, except for his relationship with his brothers. Then Valeriya walks into his life. She’s an artist and writer of children’s books who just happens to be related to the leader of his greatest enemies. He doesn’t want to trust her, but finds himself doing just that.

The middle. LOL I know that’s not what you meant, but for me, the middle of the book is where I always start to wonder if I’ll finish the story, but I always do. There is one scene, but I don’t want to give up a spoiler. Let’s just say Tarrant believes she’s betrayed him. You’ll have to read the book to find out more.

I love the back and forth between Tarrant and Valeriya. Sometimes it’s funny, other times scary, and then there are parts that are poignant and sexy. Both of them are so mistrustful but they eventually come to trust one another.

What’s your name?” she suddenly demanded. She’d kissed him and didn’t even know his name.

He opened the refrigerator door and pulled out several packages.

“Hey.” She knew it was crazy to demand anything from this man, but she was past all caution. “I asked you a question.”

“And if I answer it, you’ll never be able to leave here.” The way he said it, with little inflection, stopped her in her tracks.

It was a variation of “If I tell you, I’ll have to kill you.” It was used in the movies all the time, but Valeriya didn’t think this man was joking. “We both know I’m never getting out of here anyway, so why don’t you tell me who you are?” Maybe if she befriended him, she could get him to release her.

And then where would she go? The Knights were everywhere.

She swayed as her knees went weak. All she’d wanted to do was warn Darius Varkas about the Knights and go back home to her life. Now she feared she was truly going to die.

“What the hell?” Her captor was around the counter and caught her before she hit the floor. He scooped her up as though she weighed nothing and set her on one of the stools on the far side of the island. “Are you all right?” He hovered beside her but was no longer touching her.

It was as though he was afraid to touch her. She wasn’t sure if that was for her benefit or for his. She should be trying to figure out a way to escape, fighting the growing attraction she had for her captor. She wasn’t a guest here, but an unwilling visitor.

Unfortunately, it didn’t quite feel that way. It suddenly occurred to her that her intuition was silent. Yes, he was a very dangerous man, no doubt about it, but she didn’t feel as though he was a danger to her.

Her gift had chosen a really bad time to go haywire.

“What does it matter, if you’re going to kill me?” She’d rather get it over with than to drag it out indefinitely. And she really didn’t want to be tortured.

He swore, long and fluently, and in a language she didn’t understand. Did that mean he wasn’t American, or did he simply know other languages?

“Tarrant. My name is Tarrant. And I told you I wasn’t going to kill you.”

She rested her elbows on the counter to steady herself. “For now. You said you weren’t going to kill me right now.”

He swore again. “No one is killing anyone

N.J. Walters is a New York Times and USA Today bestselling author who has always been a voracious reader, and now she spends her days writing novels of her own. Vampires, werewolves, dragons, time-travelers, seductive handymen, and next-door neighbors with smoldering good looks—all vie for her attention. It’s a tough life, but someone’s got to live it.