Ryshia will be awarding a $15 Amazon or B/N GC to a randomly drawn winner via rafflecopter during the tour.Please visit GoddessFish.com to follow the tour, remember the more you comment better your chances on winning. 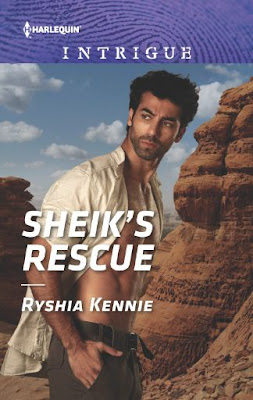 Zafir Al-Nassar knows everything about Jade Van Everett. He's studied the cases she's worked for his family's company and for the FBI. And it's hard not to notice that she's absolutely gorgeous. Teaming up for a routine security detail, Jade is desperate to prove herself and Zafir can't help but admire her determination. But when their assignment turns deadly, it becomes difficult to stay focused on the job. Because although they were hired to protect a Morrocan royal from a trained assassin, Zafir also has every intention of keeping Jade safe and by his side. Forever.

Zafir hit the brake and brought the Pathfinder to a stop on the edge of the highway. The sun had broken through minutes earlier and the snow had stopped over ten minutes before that.

Jade had her Colt in both hands. She’d put a bulletproof vest on before they stopped. Now, like her, he made a visual scan of the area before approaching the van.

He adjusted the vest, shifted his grip on his gun and moved in just behind Jade. Big mistake. She had a butt more attractive than any agent’s should be. He pulled his gaze back to the perimeter around the van. He crept up beside her. The side of the van nearest the field was sunk lower than the rest, the hood dipping into the ditch. The right front tire was flat. The driver’s door was half open as if the driver had exited in a rush. They split up, Jade approaching that side while he moved to the passenger door and pulled it open. It took a heave to do it. He frowned. The van was old. It should have been moved off the lot rather than rented. Yet in an odd way it had been the perfect vehicle. Plain and unobtrusive, it blended.

The van was empty except for the Wyoming tourism magazine that lay open to a page with a map of Wyoming. A half-eaten candy bar lay beside it and in the back was Stanley’s suitcase, duffel and his camera bag.

“He ran,” Jade said with that soft-as-butter tone to her voice. She straightened, looking across the field as if seeing immediate danger there.

The Canadian prairies are my home and while the prairie landscape is blessed with beautiful blue skies, it also has four seasons that come on full throttle – especially winter and because of that I like to travel. Often on those trips, stories are born.

In 2011 I won my city's writing award, and was the first romance writer to do so since its inception. In 2013 my romantic suspense was a semi-finalist in the Kindle Book Awards. Published in historic romance and paranormal romance as well as romantic suspense, in February 2016, my first novel was published by Harlequin Intrigue.

There’s no lack of places to set a story as my imagination and the too long prairie winters may find me seeking adventure. The memories of those worlds both near and far, the words of a stranger, the furtive look one man gives another, often become the catalyst for a suspenseful story with a deadly villain and an intrepid hero and heroine who must battle for their right to love or even their right to live.

When not dreaming of other stories, I can be found scouting out a garage sale or two, dusting off my roller blades or just thinking about the next adventure that may be miles away or in my own backyard.