Today we are spotlighting Alex R Carver's
Where There's A Will!

Enter below for a chance to win 1 of 5 ecopies of Where There's A Will
from Alex R Carver!

Alex R. Carver's
Where There's A Will! 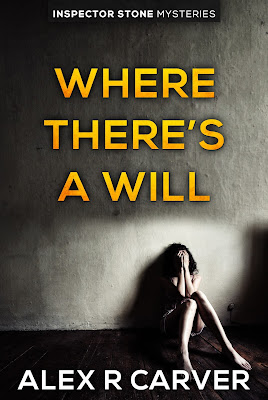 A kidnapped teen, held who knows where 3.5 million Euros are demanded in ransom, but is that all the kidnappers want?

Inspector Stone is tasked with finding the girl and bringing her home safely. Hard enough under normal circumstances, but between investigating an unrelated armed robbery, family problems and the machinations of an ambitious underling, it's almost impossible. When it turns out that the Russian Mafia might be involved in the kidnapping, things begin to spiral out of Stone's control.

Unknown to either Stone or Alice's parents, the kidnappers have more in mind than collecting a ransom.

Stone needs to find Alice before the ransom can be paid and the kidnappers can make good on their threats. Or it won't just be Alice that becomes a victim to their deadly plans...

Q & A with Alex R. Carver about
Where There's A Will!


Tell us about Where There's A Will.

What initially inspired you to write Where There's A Will?

I’ve always been a fan of crime and mystery, both true life and fictional, regardless of the format, and I’ve always been a writer, so when I decided it was time to get serious about having a career as an author, writing crime was the obvious direction for me to take. The idea for Where There’s A Will just sort of popped into my head one day, as most of my ideas do, and I sat down with a pad and pen so I could see if this was something actually worth turning into a book.

It didn’t take long to realise there was potential and get the idea fleshed out.

Tell us little about the characters in Where There's A Will.

The two main characters in the book are, of course, Inspector Stone, and his partner, Sergeant Burke:

Inspector Stone is a family man and a dedicated detective, who believes in doing a good job to the best of his abilities, a hard worker who tries to find a balance between his work life and his home life.

Sergeant Burke is also a dedicated detective, unlike his superior, though, he is single, a bit of a coffee snob (he buys nothing but the best when it comes coffee, and even has his own coffee machine in the office he shares with Stone) and a man who loves computer games.

If I’m honest, I didn’t find writing the book all that difficult, it’s what comes after that I’ve had a problem with: editing, cover design, and most especially marketing, it’s all new skills that need to be learnt and perfected, which of course never happens.

This is such a tough question, it’s hard to pick one chapter, but if I have to, I think it’s the scene between Inspector Stone and his grandmother, it’s a very personal scene for me because I went through something similar with my own gran.

I recently released a thriller about a serial killer attacking the daughters of a small English village, so now I am working on the second book in my Inspector Stone series (I have a total of 6 books written in the series so far, which I’m working on getting ready to be published.)

Now an exciting excerpt from Where There's A Will!

Side by side, as though joined at the hip, Ben and Jerry stepped through the flaps and into the pavilion. They blinked in unison as they went from the darkness of outside to the brightness of the pavilion’s interior, which was lit by portable lights that hung overhead.
They knew what to do without talking – they had been working together for so long that they would have been as close as brothers even without the bond of blood - and while Ben made for the young man busily gathering up the plastic glasses that littered the tables, Jerry threaded his way through the tables to the bar.
“On your knees.” Ben’s voice was no louder than a whisper, but he didn’t need volume to make it clear that his order should be obeyed, the sawn-off shotgun in his hand did that for him. He was pleased, but unsurprised, to see the young man drop the cups he had gathered and almost hit his head on the table he was cleaning in his haste to do as he had been told.
“What d’you want?” The cleaner’s voice trembled with fear as he addressed his question, not to the man standing over him but to the gun being pointed at him – he couldn’t force his eyes any higher than the twin dark holes that stared at him from the end of the barrel.
“The money,” Ben admitted candidly before slamming the butt of his gun down on the man’s head. He bent briefly to check that the cleaner was out cold and then stepped over the immobile form so he could join Jerry, who was waiting for him by the partition that led into the rear section of the pavilion.
Like his brother, Jerry was holding a sawn-off shotgun, which he clutched tightly while his finger twitched on the trigger, ready to squeeze it at the slightest provocation. “Three,” he told Ben quietly, having risked a look through the partition to see how many people they had to worry about. His eyes shone greedily at the thought of the money he had seen, and his body quivered like a coiled spring; it could not have been more obvious how excited he was, or how desperate he was to get on with things.
“Let’s do this,” Ben whispered. He stepped past his brother and through the partition. “On the ground, all of you,” he ordered loudly, swinging his shotgun from side to side so that the muzzle was pointed in turn at the two men and one woman; all three of them froze in the act of counting the piles of money - made by the beer tents that had been quenching the thirst of the revellers at the Rock Radio Music Festival - on the table when they saw the guns, and the balaclava-wearing men wielding them.
“Do as he says,” Jerry snarled, standing shoulder to shoulder with his brother. “On the ground, hands behind yer backs.” The moment the three of them had done as they were told Jerry lowered his shotgun and slid the bag he was carrying from his shoulder. He took several lengths of rope and strips of cloth from the bag, which he used to bind their hands and blindfolded them; finally, just to be sure they weren’t going to cause any trouble, he knocked them out, using the butt of his shotgun as a club. “Let’s get this done,” he said eagerly once he was finished.
As quickly as they could, the pair grabbed up the bundles of cash that covered the table like the cloth of a cartoon rich person and stuffed them into the bag. It took longer than they had anticipated to empty the table, and there was only just enough space in the bag for all of it – there was more money than they had expected, though neither of them thought that a bad thing, there could never be such a thing as too much money as far as they were concerned. By the time they were finished, the bag was full to bursting, leaving them both to wonder how much it was they had stolen, and how much fun they could have with it – a lot, that was certain.
A little over five minutes after entering the temporary drinking hall, Ben and Jerry left it, with Jerry practically skipping on his way through the pavilion, so excited was he. If they were not now rich men, they were certainly far better off than before, and they were both feeling full of themselves; they couldn’t think of another way they could make so much money so quickly or so easily.
“Didn’ I tell you it’d be easy?” Jerry exulted, pulling off his balaclava to reveal shaggy brown hair that was in need of a good brush, and several days’ worth of stubble. “We’re loaded, fuckin’ loaded.” He let out a short, sharp whoop of glee, heedless of the fact that there were still people around, clearing up after the festival. “How much you think we got?”
“More’n you said we’d get,” Ben said as he slid into the passenger seat of the car they had parked as close to the pavilion as they could. While he did that, his partner tossed the bag into the back seat before taking the driver’s seat. “Forty grand, at least, mebbe more. We’ll find out when we get ‘ome.”
Jerry gunned the engine and raced away from the pavilion, narrowly missing one of the festival staff who was nearby. He paid no attention to the man, who was forced to dive out of the way of the racing car to avoid being hit, as he sped across the field towards the makeshift exit from the festival grounds.

Alex Carver has worked a number of jobs over the years, none of which provided the satisfaction he got from writing, and he has now given up the day jobs to write full-time. Primarily he writes crime fiction, reflecting his interest in the seedy underbelly of life, but science fiction and kids adventure have featured in his writing, with books in those genres on the long list of titles he is preparing for release.