Today we are spotlighting Mayumi Cruz's
The Gangster & The Socialite!

Enter below for a chance to win Argan Oil from Mayumi Cruz!

Mayumi Cruz's
The Gangster & The Socialite! 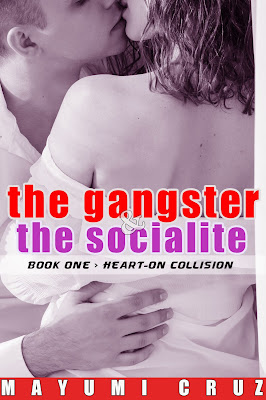 The Gangster & The Socialite packs a perfect mix of romance, murder, secrets and serendipity that will hold the reader's interest from beginning to end.

Laugh and fall in love with Richard and Megan and their escapades to stay safe and alive while discovering that the physical attraction they have for each other is the beginning of a deeper, more intense feeling that they cannot deny nor discard.

In this romantic comedy story with a crime/suspense twist, get ready to be plunged into a whirlwind of volatile emotions and non-stop action as two people from very different worlds collide, resulting in a spontaneous combustion that neither of them planned nor imagined. 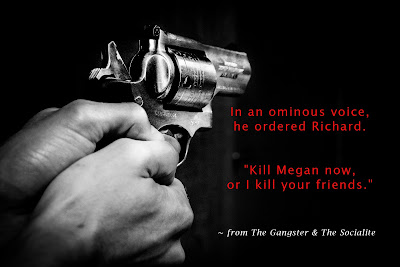 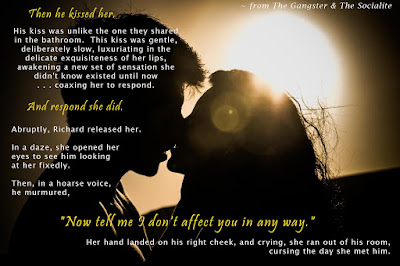 Q & A with Mayumi Cruz about
The Gangster & The Socialite!

Tell us about The Gangster & The Socialite - Book 1: Heart-On Collision.

The Gangster & The Socialite is a romantic comedy story with a crime/suspense twist of two people from very different backgrounds whom fate has destined to meet out of a tragic serendipity.

Marie Megan Montecillo is a beautiful, smart socialite who had been sheltered and pampered all her life. Suddenly, she finds herself targeted for death for reasons unknown to her. Her life turns upside down as she constantly evades her killers until she discovers who is behind the plot against her. Worse, someone framed her for trying to murder her own grandfather!

Out of nowhere, Richard, a handsome, suspicious character saves her and makes it his mission to protect her at all costs and clear her name of all charges against her.

Inspite of their colliding personalities, Megan’s cold, icy heart warmed up to his arrogant yet caring attitude. Well, of course, on top of the undeniably explosive chemistry between them!

But what if he is exactly the kind of man she is running away from?

This first in a series of romantic adventures of The Gangster & The Socialite will flutter your heart and excite you with suspenseful twists as fast-paced action interlope with sweet, passionate encounters.

What initially inspired you to write The Gangster & The Socialite - Book 1: Heart-On Collision?

Funny as it may seem, I rediscovered my love for writing through fangirling. At first, I was content to read fanfiction stories about my favorite couple. There came a time, though, that I wanted to read stories about my OTP (One True Pair) that involve other sub-genres in addition to romance. While there were some, they weren’t what I wanted to read. So, to borrow Toni Morrison’s quote: “If there’s a book you really want to read and it hasn’t been written yet, then you must write it,” I found myself writing, and the result is The Gangster & The Socialite.

William Faulkner said it right: “If a story is in you, it has got to come out.” This is now my driving force in every story I write.

Tell us a little about the characters in The Gangster & The Socialite - Book 1: Heart-On Collision.

Megan is a strong, stubborn woman who has been raised to be a dutiful member of a wealthy family. Richard is an arrogant, self-assured, somewhat street-wise guy. Already, at their first meeting, their different backgrounds and personalities clash, although they couldn’t keep their hands (and their lips) from each other.

Believe it or not, the kissing scenes. I wanted to project their obvious attraction for each other without coming off as brassy or indecent.

Hands down, it’s Chapter 10, Bubble Trouble! The scene kept running inside my head, what with all those bubbles and all.

So far, I have finished three novellas, one of which is Book 2 of The Gangster & The Socialite, although I have yet to edit them and get them ready for publishing. I am writing two stories right now, one involving a billionaire and a widow, and the other, a playboy and a publicist. I have also started writing an epic, a fantasy trilogy. And then there’s a new plot persistently cropping out of my mind about a werewolf and a witch. Wish me luck! 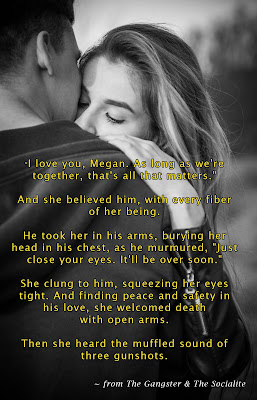 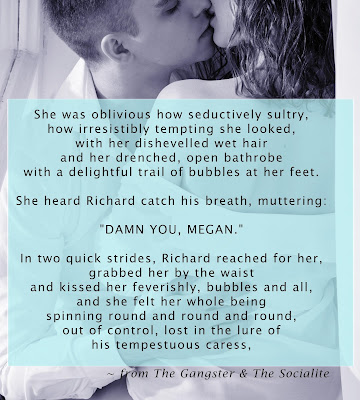 Now an exciting excerpt for The Gangster &
The Socialite!

Richard acted swiftly upon seeing the armed man aim the gun at her. Taking off his helmet, he threw it with full force at the man's hand, knocking the gun away from his grip, a scream of pain echoing in the empty street.

But the gun still went off as it landed in front of Megan, its bullet grazing her left arm.

Richard saw Megan collapse to the ground unconscious, blood oozing from her.

Quickly, he dived for the gun lying on the puddle of water. Grasping it, he pulled the trigger, firing three shots in succession. One of the bullets hit the driver’s leg, the other bullet struck the other man’s shoulder. The driver shouted, “Let’s get out of here!”

The rain poured harder as the riding-in-tandem hurriedly sped away into the dark, rainy night.

He felt a pulse, thankful that she is alive but unconscious. Thinking that the two men would return with reinforcements to finish off their job, he put the gun in his jacket’s pocket and scooped Megan in his arms, running away from the scene.

Luckily, after a few meters, an empty taxi appeared. He barked instructions to the perplexed driver where to take them and they rode to safety, far away from the place where death nearly took her life.

Megan is now slowly regaining consciousness as she felt warm breath on her face. Tentatively, she half-opened her eyes, pretending to be still asleep.

It was the dimpled man!

She saw his serious face, dangerously near hers, but intently looking over her left shoulder. Not wanting to but cannot help it, she noticed his manly face was smooth except for an almost unnoticeable pockmark on his right cheek. His nose is straight, his lips thin but reddish. His eyelashes are long, surrounding his gun-metal eyes. His thick brows are now furrowed in concentration.

He was leaning his body close to her, bare from the waist up, wearing only pants, unaware that she is awake.

Horrified at seeing his unclothed chest almost touching her, Megan snapped her eyes wide open and pushed him away with all her might, screaming as she did so.

"You really are a rapist! Rapist! What did you do to me?"

Taking in her surroundings, she saw that they are in a sparsely furnished, dimly lit room. The bed where she presently lay, however, is huge. It was clearly a man’s room.

Appalled, she saw her clothes were strewn on the floor where he is now slumped down due to the force of her shove. She panicked all the more when she noticed she was wearing only a white man's long sleeved polo too big for her size, and instantly knew it was his.

"You’re despicable! What did I do to deserve this? Why did you do this to me? Why did you rape me?” She was openly crying now and screaming at the same time, horrified at what she thought he has done to her.

Calmly, Richard slowly stood up from the floor and folded his arm on his chest as he looked irritatingly at her.

“Miss, my ears are already hurting because of your screams. You haven’t stopped screaming since last night!”

"Wh-whaaat? Since last night? You mean, you. . . you raped me all nightlong? You. . . you scoundrel! Scalawag! Beast! You’re a beast!” weeping as she threw a pillow at him with her right hand.

He caught it fast and threw it back at her, hitting her squarely at the face.

"Awww!" she yelled, more out of shame than of pain.

"Will you please stop, Miss? What do you think of yourself, a supermodel? I’m saying it again, I am not a rapist! Stop screaming, you are so noisy!”

This girl is so full of herself! Richard can't help thinking. But still, she looked awfully cute wearing his polo, its length reaching down to the middle of her smooth, ivory legs.

Seeing him gaze at her legs, she hurriedly sat up, hugged her legs to her chest, using the big white polo to cover her entire body, seeing that there was no blanket at hand.

"Liar! If you didn’t rape me, why am I here? And I don’t care if the whole world hears me! You’re a liar and a rapist!”

Her attempt at modesty with the polo amused Richard. Did she think this is the first time he saw a woman's legs? Oh, if she only knew!

But strangely, this put him in a jolly mood, and he decided to play along with it.

"Miss, for your information, I didn’t rape you. You wanted it. You pleaded for me to do it. It was consentual," smirking as he spoke, his dimple showing.

"No. And I’m not interested in knowing who you are. You said it yourself last night, it was only a one night stand. No names, I believe that’s your term.”

Richard's laughing so hard inside as he told himself, I haven't had this much fun, ever!

Sputtering her words, she trembled with anger and indignation as she looked around wildly.

It was then that she saw the gun beside her, exposed from under the pillow they used to throw at each other.

But Richard saw it too, and he cursed himself inwardly for forgetting to dispose the gun from last night’s shooting. Quickly, before Megan was able to pick it up, he jumped over to her and swept the gun away. It fell on the floor at the other side of the room.

However, in doing so, by now he and Megan are on top of each other, his bare chest touching her scantily-clad body, his weight pushing her down on the bed.

Mayumi Cruz serendipitously rediscovered her passion for writing after retiring from workforce through—hilariously—fangirling.

She loves to write about strong yet feminine female characters and assertive yet sentient male heroes, and absolutely lives for cliffhangers and twists.

When not writing or reading, she spends her time painting and watching movies. Born in the Philippines where she presently resides with her husband and three children, she is a certified chocoholic and ice cream lover who dreams of creating a great epic novel.