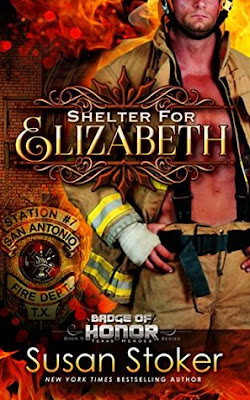 Blurb: Elizabeth Parkins lived through a nightmare come true—getting kidnapped by a serial killer. Seeking a fresh start, she moves to Texas, but escaping her demons proves impossible when she's too terrified to leave her own apartment. A small, accidental fire sparks a coping method she'd never expected, and brings an amazing man to her door.
Firefighter Cade "Sledge" Turner's idyllic life ended the day his sister was kidnapped. Now he knows firsthand that tragedy can befall anyone, at any time. Meeting Elizabeth on the job was a gift. Cade can envision spending his life with this woman. He understands what she's been through, is willing to help her heal…though even Cade is unaware of Beth's new secret obsession.
As Beth takes steps to help herself heal, and Cade attempts to earn her trust and prove his own, they're both about to be tested—in a way that could see everything they've worked for go up in flames.
* Shelter for Elizabeth is the 5th book in the Badge of Honor: Texas Heroes series. Each book is a stand-alone, with no cliffhanger endings.
Goodreads

Tell us something that people would be surprised you know how to do.
Play the tuba. I started when I was in the sixth grade and played throughout middle and high school. I haven’t picked one up in over twenty years, but I could probably still make some half-way decent noises come out of the instrument if I tried.

Will you write more about these characters?
In all my books and series, the characters make some re-appearances. It’s what makes it fun. Most of the time they aren’t huge cameos, but they’re there. In Shelter for Elizabeth one of Beth’s big goals is to be able to go to the 911 stair climb, or the firefighter vs cop softball game…so expect in the future to see Beth at one or both of those as she continues to fight her demons! 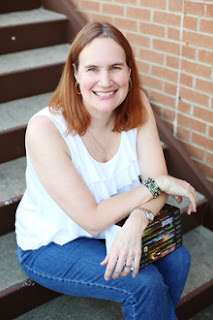 About the Author:
New York Times, USA Today, and Wall Street Journal Bestselling Author, Susan Stoker has a heart as big as the state of Texas where she lives, but this all American girl has also spent the last fourteen years living in Missouri, California, Colorado, and Indiana. She's married to a retired Army man who now gets to follow her around the country.
She debuted her first series in 2014 and quickly followed that up with the SEAL of Protection Series, which solidified her love of writing and creating stories readers can get lost in.
Website Newsletter Twitter Facebook Goodreads Amazon
By Unknown - May 28, 2016