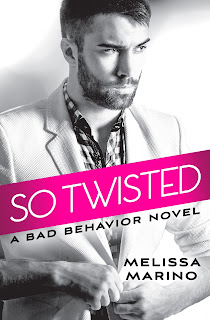 SO TWISTED by Melissa Marino
Book 1 of the Bad Behavior series
Forever Yours, Grand Central Publishing
Release Date: Nov. 1, 2016
— SYNOPSIS —
Sometimes it feels good to be a little bad.

Callie has found the perfect job. As nanny for a single dad and his adorable daughter, she can pay off her student loans and live in a nice house in the heart of Chicago. There's just one problem-her new boss. Definitely no dad bod here. Just six-plus feet of raw, sexual energy. Whoever heard of a dad being so hot?

From the sparkle in his daughter's eyes, Aaron can see that hiring Callie was a good decision. But Callie's breathtaking smile and long legs have him thinking about his own needs. Aaron knows it's a bad idea to get involved with the nanny, but it's been years since anyone has captivated him like Callie.

When living under the same roof proves too tempting to resist, Callie and Aaron discover a mind-blowing passion unlike anything either has experienced. But with a curious child and a nosy family in the mix, their secret, no-strings fling soon turns into a twisted, tangled knot... 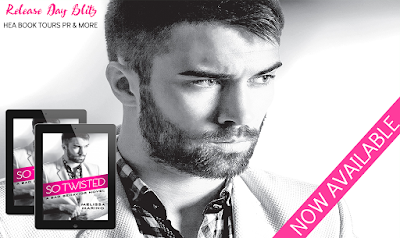 — EXCERPT —
Startled, I spun around to see Aaron standing in the entryway of the kitchen. I placed my hand on my chest as I tried to catch my breath.

“The devil, huh?” he asked, dragging his fingers through his dark hair.

There was no smile, no hint of joking. I didn’t know what he was doing by coming to me again. There was no room left in me to try and figure him out.

“Did you need something?” I asked.

He shrugged. “I heard you down here and—”

His large shoulders lifted as he took in a deep breath. He didn’t need to say a word. He absolutely did hear. There are times when you’d think to yourself, Wow. Things can’t get much worse than this. Then like magic, it does. This was one of the moments.

I turned back toward the sink, and after a moment, I heard him move, stepping cautiously toward me. I couldn’t face him.

“If what you said was true.”

He came up behind me, but I still couldn’t look at him. I knew if I did I would lose what little control I was holding on to.

His movements got closer.

My body adhered to the warmth coming off of him, willing me into submission. I knew in my mind I couldn’t do that, but my body, my body was screaming something different to me.

“Calliope,” he whispered into the back of my neck. “Tell me. Please.”

His hands circled my waist, and I lost all resolve when he pulled me into him. His lips grazed my ear. “Tell me,” he repeated.

I was almost light-headed, our bodies melting into each other, his warm mouth breathing softly on my neck. “What do you want me to tell you?”

His grip around my waist tightened, and he spun me around, our faces just inches apart. His eyes lingered over my face, settling on my mouth. He dragged his tongue over his bottom lip, the energy between us enough to make me tremble.

Before I even knew what he was doing, he shifted me away from the sink and picked me up from the waist, lifting me onto the countertop. With his eyes still fixed to mine, he placed his hands on my bare knees, spreading apart my legs.

He stepped into me while lazily dragging his hands from my knees to my hips. His movements continued up my side, increasing pressure while passing my breast and letting a thumb graze over the swell underneath it.

He still hadn’t answered my question when his hands reached my neck, and he intertwined his fingers behind it.

He leaned forward. “Tell me it’s okay for me to kiss you. I need you to say this is okay,” he begged.

I shut my eyes tightly, knowing the only way I could refuse him would be if I didn’t have to see him. “I can’t. You said—”

I should’ve said all these things.

I should’ve pushed past him and run out of the kitchen.

But I didn’t do or say any of those things.

Instead, I did the one thing I knew I shouldn’t. I opened my eyes, met his, and willed myself to stay strong.

He reached his other hand up to the side of my face, cautiously and painfully slow. “I know you feel it, too. I see it in the way you look at me, the way your entire body responds when I move close. I just heard you say the words on the phone. I’m telling you I feel it, too. I’ve fought it, but…” He trailed off.

I tilted my head, resting my cheek into his touch. Everything about him surrounded me, and I fought against the voice inside of me, the screaming voice that shouted this was wrong.

But there was another voice that told me that this was maybe a once-in-a-lifetime thing, that if I walked away I’d never feel this kind of intense pull to another man again. Yeah. That voice was so much louder.

His expression looked almost pained, and I knew he was battling the same voices in his own mind. “I’m not sure, but I can’t walk away anymore.”

He was leaving it in my hands. It was all me. I knew what I should do, but…

I grabbed his shirt in two fists and pulled him toward me, our lips almost touching. “It’s okay.”

Our lips connected in a fiery passion and my body lit up everywhere. The answer was right there. This was what I wanted.

And it was what he wanted, too.

— ABOUT THE AUTHOR —
Melissa Marino is a full-time writer and part-time Storm Trooper collector. When she's not writing, you can find her watching Friends reruns, mastering her cupcake frosting swirl and hunting for the perfect red lipstick. Melissa lives in Chicago with her husband, son and very opinionated dachshund.