Pearl R. Meaker will award a randomly drawn commenter a $25 Amazon/BN GC. Please visit GoddessFish.com to follow the tour, remember the more you comment better your chances on winning. 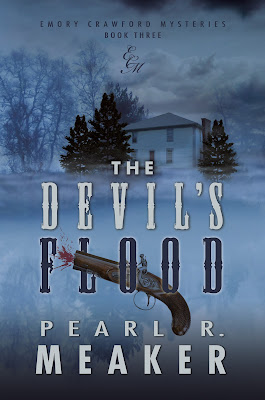 Can a house vanish without a trace? What is the "super booze" that's available at clandestine drinking parties in Golden County? When mummified bodies show up at an archeological dig and a young man gets shot in a duel at a party, can Emory and Madison find the answers in the midst of a flood year?

“Okay.” Kate said, pulling her phone out of a pocket as Jairus and the crew gathered around me where I stood watching the rescue team go in after my husband. “Here’s a shot of Dr. Crawford.” She held the phone in front of me. “He’s still conscious and managed a little wave, but I’m glad the rescue team is heading in.”

I glanced at the photo. Jebbin lay in a pool of light on what looked like a pile of bedding heaped on a rough wooden floor. His glasses had fallen off. He never looks quite right without them, and
I could tell he was hurting. Probably feeling a bit nauseous as well. In spite of it all he wore a wan grin and had lifted a hand in greeting.

In the sharp glare of her phone’s flash a mummified man sat on the floor, his back against a wall. There was a dark stain spilling down his chest from a hole near where his heart would be.

“There’s one part of the company Dr. Crawford mentioned he had.”

She swiped again. “Here’s the other.”

This mummy lay on its back. The flash showed a stain that flowed from his chest and down his side to form a hardened puddle on the floor.

“Which one’s my Grandpa?” Melva gasped.

Thank you, Eskie Mama for hosting my book and me. (

I have to start with Agatha Christie. She was one of my first favorite authors and it was a long time before I realized there were other mystery writers who wrote stories similar to hers. I’ve been reading her mysteries since I was nine years old. When my editor read a synopsis of my first book, The Devil’s Music, she said Emory was a new Miss Marple. I couldn’t have been more pleased at the comparison.

Cozy mysteries are still my go-to genre when I want a relaxing, entertaining read.

Next would be J.R.R.Tolkien. Even though I adore mysteries, and cozies are my go-to read, my favorite book is The Lord of the Rings. Tolkien brought such depth to his Middle Earth and its many inhabitants. The first writing I did for the public to read was fan-fiction based on The Lord of the Rings.

Then there’s a lot of mixed genres of authors and styles that I’m sure my brain throws into the mix that has become my style.

Having to wear my hair short.


My hair has become quite fine in texture and it started to look scraggly when it was long. I didn’t like how I looked with it pulled back all the time either. The only option left was a shorter style.

When you are in writer mode, music or no music? If music, do you have a playlist?
Music. (

The music has to be instrumental or the words in the songs start to seep into the story.

I listened to bluegrass while writing The Devil’s Music since that style influences the story. For The Devil’s Hook it was a mix of bluegrass, Celtic and relaxation music.

I had a play list for The Devil’s Flood that was all nature sounds of rain and water. I even had some tracks that were recorded underwater.

When I wasn’t actually writing I listened to the song “Flood” by Jars of Clay. You can listen to it on my webpage: https://www.pearlrmeaker.com/the-devil-s-flood.html

I especially like the line, “Slowly I become one with the mud.”

Who was your favorite hero/heroine?

I don’t really have just one.

I love Eowyn in The Lord of the Rings. I loved that she ends up finding out that riding into battle isn’t the only kind of strength.

I love Pippin, also in The Lord of the Rings. He starts out so innocent about the world but grows into a fine, responsible, courageous hobbit.

And there are others. Most of them are pretty normal people who are strong in ways that aren’t showy.

Yes, sort of, but it was in one of my fan-fiction short stories.
I had wanted Aragorn to be the person Merry, Pippin and Sam meet up with while riding off to meet Aragorn at his city in his northern kingdom. The hobbits get caught in a storm and he was supposed to have ridden out to save them, but I just couldn’t get the story moving with him there.

A character I’d never seen kept popping into my thoughts and saying, “I’m the one who saves them.” He introduced himself as Smirnin the Half Dwarven (half dwarf and half elf). So I finally gave in, took Aragorn out and wrote him into the story and he was perfect.

Slightly quirky, always creative, Pearl R. Meaker has been an artist, singer and craftsperson her whole life. Although she's always had stories in her head, they didn't come out to play with others until the advent of home computers with their ease of making corrections and moving bits around.

After several years of writing fanfiction in the world of Tolkien's Middle-Earth, she took a couple of writing courses and dove into writing original works of fiction, and The Emory Crawford Mysteries were born.

When not playing with story ideas you can find Pearl playing with yarn either knitting or crocheting, doing other arts and crafts, bird watching and photographing nature, playing bluegrass fiddle (her husband plays banjo) or relaxing with her hubby on the sofa watching mystery shows on Netflix.
Oh - and reading all sorts of books, but especially cozy and other types of mysteries!

The books in The Emory Crawford Mysteries Series are reminiscent of Agatha Christie's Miss Marple mysteries, which is why Pearl has chosen to characterize her stories as "murder genteel."