Blog Tour w/Giveaway: Don't Lie To Me by Amber Bardan

Amber Bardan returns with a heart-stopping third installment in her
high-octane, highly addictive Bad For You series. 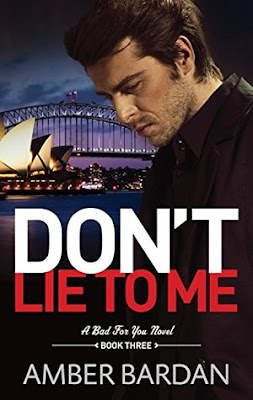 A fling with her best friend's reclusive business partner should've been harmless.

When Emma meets him, the only way she's looking to be tied down is in the literal sense. But Avner—shady hacker, off-the-books investigator, occasional spy—takes her breath away. He's the first man who doesn't turn to mush under her sexual spell: a fact that makes what's between them very different, and very real.

Beautiful and uninhibited, Emma is everything Avner thought she would be and more. Yet his deadly past and dark duties can never be forgotten…not even as he succumbs to their seductive intimacy. But for the first time he's after something of his own, as well.

And now that he's found Emma, he'll protect her, no matter what. Because anything worth loving is worth fighting for.

But nothing about Avner is remotely harmless.

Soon, Avner has infiltrated Emma's personal life, stalled her career and nearly destroyed everything she's worked for—all in the name of protection. Desperate and heartbroken, drawn into a secret criminal underworld in her quest for understanding, Emma discovers the truth: Avner's secrets are far more devastating than his lies.

One-click with confidence. This title is part of the Carina Press Romance Promise: all the romance you're looking for with an HEA/HFN. It's a promise!

“You’re breathing fast.” The sun hit his face, turning his shrewd eyes deep amber and gold. “What are you afraid of?”
My nails scraped the underside of the ledge.
I didn’t glance at the water, the greater of the two things that right then truly scared me. “You’re all wet.” I raised a hand I wished were steady and set it on his broad shoulder.
“You’re very—” my touch smoothed over his slippery skin “—very sexy, all wet, Avner. That’s why I’m breathing fast.”
His nostrils flared a fraction. “That’s a reason.” His grip tightened on my thighs. He pulled me closer, and claimed the space between my knees for his own. “But we both know that it’s not the only one.”
My breath caught. I grabbed both his shoulders.
“Do you always flirt with fear, or only with me?” He dragged my hips. My ass scraped on tiles through my bikini briefs, and my heart knocked against my ribs.
“What are you talking about?”
He slid me a little more. One more inch and I could slip right into the pool. But his arms came around me, and he lifted me against him. My chest slid over his. I wrapped my legs around his waist, and clung. Water lapped around my calves—my knees.
His mouth pressed into my hair as though he were telling a secret. “Does it turn you on to be a little bit afraid?”
Adrenaline plowed through me, lifting my stomach like a theme-park ride, making my lips tingle, and fingers shake.
“I’ve asked myself why.” He grabbed my ass and stepped back from the edge. I held on, my entire body pulsing with electric buzz. “Why does this woman who resists me, also lure me?” His words pierced through the howl of blood in my ears. “Why does she look at me like she’s in the middle of the dream, when she also trembles against me?”
Water climbed around us, moving toward my waist. I clutched him with the full force of my muscles. My head spun. I breathed into the feeling of something between panic and delirium.
His breath poured in a hot, hoarse whisper. “Why does she struggle, when she’s wettest when I hold her down?”
I twitched. My back met a solid force. The other side of the pool. I reached behind me with one arm for the ledge, but hung on to Avner with my other.
With that space between us, I saw his face, impassioned so fiercely he could’ve been angry—chin low, gaze hooked on me.
He wasn’t done with whatever he was doing. “You came to the edge, and I saw right here—” he released one hand from my waist and touched the base of my neck “—your heart pounding like it were about to break through skin.”
My pulse leaped against his touch, leaving no doubt he’d detect every little variation in the beat.
“The same way it did in Italy when you’d step out onto a balcony. Yet, you lean over railings and dip your toes anyway.” He moved, his touch circling my throat, baring me back against the edge. “Just like you come after me.”
My head swirled, woozily and not so different to when I’d been drugged. His voice moved through me, through my memory, tempting out flashes of things—like the first time I’d turned up to a fight. Took a punch. A real punch designed to knock me down. The first punch that hadn’t been from my father. How my blood trembled, scared yes, but alight with exhilaration. Because I chose it and owned it.
He drove his big hard body against mine. “You’re afraid because I’m stronger than you and that turns you on.” He squeezed—just enough for the pressure to flare without choking. “You’re scared right now, that I could drop you…”
My eyes flared, heart stopped, breath vanished.
“But you know I’ve got you.” He released my throat.
I didn’t fall. Not with his body holding me up. I’d never fall with Avner. That’s why he was the first time I’d taken a risk on a man.
My chest constricted—hard.
“And now we both know why you’re here.” He tugged at my hair, jerking my head back, but I could hardly see him through the building sheen. “I’m your darkest desire.”
I shuddered, shivered, shook, but couldn’t deny it.
He was the fantasy I never let myself have—dangerous and safe.
Attentive and possessive.
Frightening and irresistible.
“I’m your darkest desires, Emma, and I intend to fulfill them all.”


Have you met Haithem? 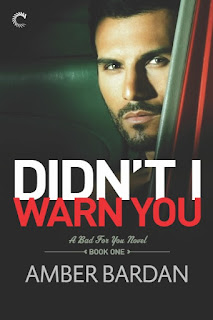 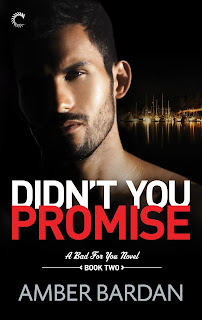 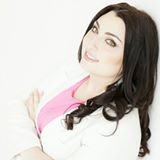 After spending years imagining fictional adventures, Amber Bardan finally found a way to turn daydreaming into a productive habit. She now spends her time in a coffee-fueled adrenaline haze, writing romance with a thriller edge.

She lives with her husband and children in semi-rural Australia, where if she peers outside at the right moment she might just see a kangaroo bounce by.

a Rafflecopter giveaway
By Unknown - November 04, 2016