Carmen Amato will be awarding a $50 Amazon or Barnes and Noble GC to a randomly drawn winner via rafflecopter during the tour. Please visit GoddessFish.com to follow the tour, remember the more you comment better your chances on winning. 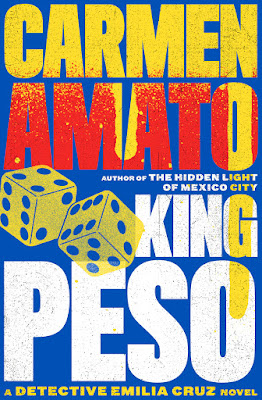 KING PESO is the fourth book in the sensational Detective Emilia Cruz mystery series recently optioned for both television and film. Emilia is the first female police detective in Acapulco, where Mexican drug cartels battle for control and politicians are bought with blood money. Three cops are murdered, execution style. Emilia worked with them all. Her partner’s wife is killed in a home invasion. Was he the real target? Is Emilia the next? She hopes to be assigned to a task force to investigate the killings, but is instead directed to a new police unit championed by Acapulco’s ambitious mayor and overseen by a shady union strongman. But when Emilia stumbles upon a falsified report, she will conduct a private investigation, even as another murder victim carries a stark message for her.  Home is no refuge for Emilia; hotel manager Kurt Rucker has a shocking secret that could tear their relationship apart. Unexpected help comes from a frightened attorney and a famous movie star, but each new clue to the murders unravels the one before. Meanwhile, Emilia’s ongoing hunt for a missing girl, a continuing series subplot, leads to the infamous El Pharaoh casino, a place she knows only too well. What do a casino and a cop killer have in common? Emilia bets on her partner, but his gamble could cost both their lives.

“Detective Cruz, I’m so glad I found you.” It was Claudia Sanchez again, but no longer Emilia’s new best friend. She thrust out a cell phone, the gesture full of shaky bravado. “I need your contact information.”

Emilia blinked at the woman.

“We need to schedule our first planning meeting,” Claudia continued. “I’d like to make it the same time every week. We’ll meet in my office in this building until we move to the Las Palomas headquarters.”

She paused and looked at Emilia expectantly.

After a moment of confusion, Claudia went on doggedly. “We have a lot of decisions to make. Carlota has given me a file full of her ideas. We really need to focus on the uniforms. Carlota wants something with that signature Las Brisas pink.”

“Do you have any idea what it means to be a cop in this city?” Emilia asked abruptly.

“I . . . I majored in public administration and security in college,” Claudia stammered. “I’ve been working for the mayor for almost two years.”

Emilia was nearly speechless with sudden fury. “Have you ever listened to your partner describe how he came home to find his wife a bloody dead mess?” She launched herself off the wall as she spoke. “Paid a snitch on the street for information to keep your friends from being killed? Scraped bodies off a sidewalk after a gang fight?”

Claudia took a shaky step away from Emilia. “You’re not being very nice, Detective Cruz.”

Emilia’s anger fled as quickly as it came. Claudia’s face was puckered with the effort not to cry.

The situation was hopeless.

Q & A with Carmen Amato

What books/authors have influenced your writing?
First, thanks so much for having me today and letting me introduce your readers to the Detective Emilia Cruz mystery series and KING PESO, the latest mystery. Emilia is the first female police detective in Acapulco, taking on Mexico’s drug war and culture of machismo.

My writing has been inspired by a number of different authors:

Ken Follett: His earlier works including Night Over Water, Triple, The Key to Rebecca and The Eye of the Needle all have a tension-filled storyline, interesting characters with complex relationships, and multiple voices that are all integral to moving the plot forward. Not to mention the hot sex scenes.

P.G. Wodehouse: I discovered this British humorist in high school and have read dozens of his books and short stories.His world is that of 1920’s England. All of his books have an invariably tangled plot, crazy characters, and perfect phrasing (“he writhed like an electric fan”) that never grow old. My favorite is The Code of the Woosters.

Robert B. Parker: The creator of the Spenser mystery series is a study in perfect-pitch dialogue. Some of his books are a series of conversations that are so well crafted that virtually the entire plot/mystery is revealed in this way. His action scenes are never gratuitous which means they pack a big punch. My favorites are Potshot and Hugger Mugger.

Mark Twin famously said that if you ate a frog in the morning, the rest of the day had to be better. Housework is my particular frog so I try to get annoying tasks like emptying the dishwasher and throwing in a load of laundry done early in the day.

I hate doing housework so much I interrupt myself, too, usually to check my email or surf pinterest! I always have a pen and paper handy to scribble down book ideas.

After all, boring women have immaculate houses, right?

I love to travel and my experiences in Mexico jumpstarted my literary career, resulting in KING PESO and the Detective Emilia Cruz series.

But before that happened I had quite an adventure scuba-diving across the Pacific, including in Fiji. I arrived there alone at 1:00 am after a 12-hour flight. There I was, in the middle of the Pacific, with a heavy suitcase, an even heavier bag of scuba gear, and reservations for a hotel that was 20 miles away. I’d never been in Fiji before.

A nation of islands, Fiji was a former British colony. When the Brits found out that it was the ideal climate for sugar cane, Indian workers from the subcontinent were brought in the raise the crop. Sugar cane became Fiji’s main export, sweetening British candy and giving rise to local rum production as well. But land in Fiji–and accompanying political power–is reserved for native-born Fijians. The Indian population’s economic and political power grew with the population, until an Indian was elected prime minister. A racially-motivated coup by a native Fijian army officer was swift and bloodless. It returned the former native Fijian prime minister to an interim status but a second coup occurred when the army ringleader took power himself.

Two weeks before my arrival.

I was directed outside the terminal into a taxi driven by a turbaned Indian gentleman. We headed off in the pitch-black for Suva, the capital city. The taxi tooled along nicely until we came to an army roadblock. A single Fijian soldier stood guard, wearing a military uniform shirt tucked into a traditional Fijian sulu, or kilt, and sandals. He had an assault rifle, a flashlight, and a long wooden barrier.

Let me digress here and say that Fijian men are the most handsome men on earth. All are about seven feet tall, muscular to the point of sculpture, and have deliciously dark hair and eyes.

So back to the car. The driver stopped the vehicle in front of the barrier. From my vantage point in the back seat I saw him sweat and shake as the soldier and his nice gun approached. The driver stared ahead, steering wheel locked in a death grip, and didn’t acknowledge the soldier.

For whatever reason I rolled down my window, smiled shakily, and held out my American passport.

The soldier bent down to peer at me through the open window. Up close he was gorgeous; dark mustache, lose-yourself-in-them brown eyes, perfect teeth.

“Hello,” he said, making it sound as if I was the woman he’d been waiting for all his life.

“Hello,” I replied, now confused as well as nervous.

He stepped away from the car and studied my passport in the beam of his flashlight. There were no streetlights, no other cars, the airport far behind, the empty road unspooling in front of us only to disappear into the darkness. The taxi driver continued to shake like soupy gelatin.

The soldier came back to the car and leaned down to look at me again through the window. “Goodbye,” he said, infusing his voice with Casablanca-like drama. He handed back the passport. Our hands met.

He moved the barrier, the taxi driver gave a little sob, and we sped off, leaving Sergeant Fiji by the side of the road.

It was a short but memorable love affair.

There is usually so much dialogue in my head I don’t need any other distractions. So no music.

What a Cryin’ Shame by The Mavericks
La Mucara by The Mavericks
Just Another Day by Jon Secada
If You Go (Si Te Vas) by Jon Secada
Whenever, Wherever by Shakira
The Lonely Bull by Herb Alpert and the Tijuana Brass
Solo Pienso En Ti by Miguel Bosé
Tu Boca by Cheyanne
All My Bridges Burning by Los Lobos
Tu Fotografia by Gloria Estefan
Fuego de Pasion by Alex Torres and the Latin Kings
Plus, anything by Maná (Detective Emilia Cruz's favorite group)

Have you ever had one character you wanted to go one way with but after the book was done the character was totally different?
Yes! In the 3rd Detective Emilia Cruz novel, HAT DANCE, a violent arsonist is targeting high-end restaurants in Acapulco. Emilia and her partner, senior detective Franco Silvio investigate but don’t get far. A federal arson investigator is called in to help.

At first the investigator was a woman who becomes Emilia’s rival while sleeping her way to the top. But after a few chapters, the character changed into a man who is a potential rival for Emilia’s affections. The change got rid of an unnecessary subplot while allowing Emilia and Silvio to work a few things out in their own unique and argumentative way.

I shared the “lost” chapters with my newsletter readers who liked the tension the woman brought to Emilia’s circle so she might get resurrected in a later book.

Carmen Amato is the author of romantic thrillers and the Detective Emilia Cruz mystery series set in Acapulco which was recently optioned for film. Originally from New York, her experiences n Mexico and Central America inspire many of her books. For a copy of the Detective Emilia Cruz Starter Library, visit her website at carmenamato.net
Connect with her on Facebook, follow on Twitter and Pinterest, and get her books on Amazon.

a Rafflecopter giveaway
By Unknown - November 18, 2016