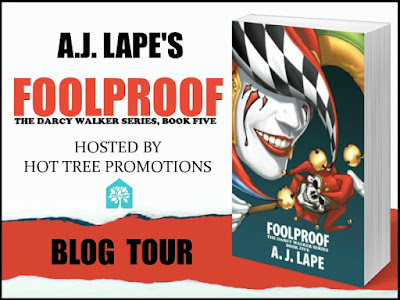 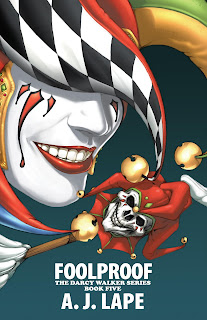 Jon Bradshaw needs a girlfriend stat. When he convinces Darcy Walker to be his wingman at a speed-dating event, one debacle leads to another, and before you know it, they’re the proud new owners of a dead body. Problem is, the body has a tie to Darcy…making her a person of interest in a murder.

Things quickly jump from bad to worse when someone hijacks the name of Darcy’s alter ego, framing “Jester” in a Hitchcock-like blend of crimes that leaves her head spinning.

In FOOLPROOF, Darcy battles an adversary who tests her IQ while she navigates the daunting worries of a high school senior. Add on the emotional fallout of her latest caper, a cop breathing down her neck, and a hot but stubborn boyfriend, and she’s at her wit’s end.

Can she find her zen and unmask the real murderer? Or get used to a life of prison orange?

Amazon: US I UK I AU I CA
Nook I Kobo I iTunes
Welcome to Darcyville
The Amazon bestselling Darcy Walker Series has been compared to Veronica Mars meets Stephanie Plum meets The Black List. All novels are written as stand-alone novels, but a backstory is woven into each book. Reading order is Grade A Stupid, No Brainer, 100 Proof Stud, DEFCON Darcy & Foolproof.

Clean mature YA series for ages 13 and up due to graphic crime scenes.

What reviewers are saying

"Defcon Darcy is my favorite in the series, but not only that, it is my favorite YA novel to date. A.J has the perfect voice to channel the perfect teen for pure entertainment, and to see it all come alive in this book was total joy!" - Lila Rose, USA Today Bestselling author of the Hawks Motorcycle Club Series.

"A. J. Lape has truly established herself as not only an extremely talented, 5-star mystery writer, but also a true master of romantic, gut-wrenching novel writing. I will go on record saying this book will knock any Nicholas Sparks book out of the water." - Julie Cassar, Amazon Bestselling Author of the Ruby Blue Series.

Her brand of justification is awesome. She makes everything make so much sense in a warped way - Sheri Spell, Two Bibliophiles Guides to Seriously Awesome Books

Fifteen years ago, Darcy Walker's parents thought it was a good idea to give her a unique name: Darcy, meaning "dark walker." Whether that was a stroke of genius or stroke of stupid, they definitely nailed the irony. She lacks direction, her grades stink despite a high IQ, she's boringly average--although flirting admirers claim otherwise--and God help her, she's infatuated with a bad-boy.

A bad-boy that her hottie best friend, Dylan, wishes would get acquainted with his fist.

And, oh yeah, there's that tattoo that was a royally stupid idea.

With her life spiraling out of control, everything changes when she skips class and finds a dead body...in fact, it gets worse. It jump starts Darcy's inner-verb, and her brain hardwired for action gets caught up in a situation she can’t let go.

Set in the fictional Cincinnati town of Valley, Ohio, Darcy falls into a world of threats, violence, and gangland exploits chasing down every clue to finger the murderer. When a fellow misfit is arrested for the crime, Darcy goes from zero-to-sixty trying to clear his name--constructing aliases, breaking the law, everything that makes perfect sense to her but reeks of Grade A Stupid to everyone else.

Two weeks before junior year, Darcy hops a plane to Orlando for a little R&R with her best friend Dylan and his family. Fresh off the heels of solving three murders in Valley, Darcy plans to sit back and enjoy the vacation capital of the world…maybe if you're a noun. Darcy Walker, however, is nothing but verb.

Before her feet hit the Orlando soil, she's meddling in the disappearance of a five-year-old boy who vanished six months earlier.

With authorities still no closer to solving the case, Darcy is shanghaied by her impulsivity and runs headlong into that proverbial burning building, convinced she can bring him home.

She travels down a road that not only follows this missing child but branches off into the corrupt and sinister world of mob activity when she tampers in a case on which Dylan's detective grandfather is working.

After a near disastrous midnight meeting in a warehouse and a date with a mechanical bull, Darcy realizes she might've bitten off more than she can chew. Add the boiling flirtationship with her best friend and the appearance of his romantic rival, and she is in over her head.

Will she survive a life of flirting with death too easily? Or will her flirtationship with Dylan become the actual death of her instead?

For a girl with a habit of finding dead bodies, No Brainer gives Darcy Walker more of the same…surprising twists and turns…and running for her life.

Sometimes life smacks you right in the kisser with a whole lot of ohhhh craaaaap.

100 Proof Stud picks up four months after No Brainer's cliffhanger ending, and Darcy discovers the aftermath pales in comparison to the crisis her heart is in. All of a sudden it's raining men, and this teenage heroine’s personal life turns her inside out.

Before she can sort out her feelings, she chases a spray-painting vandal and stumbles upon a case of identity theft right in her own backyard. Darcy jumps into the fray headfirst to prove she can hang with the big boys.

But it’s not just to hang…nope, she’s chasing reward money.

Tapping her band of misfit brothers for help, she turns Valley upside down trying to unearth the criminals. Problem is, the cloak and dagger goes high-octane, and she raises the bar on “crazy" in the process.

Bullets ring out…dead bodies appear…and Darcy rubs shoulders with the ultimate sociopath. In the midst of murder and mayhem, will she finally follow her heart or build a fortress of lies around it? Will she even get the chance?

Fisher Stanton, Valley High School's Nantucket wannabe, has a cheating girlfriend. When he hires Darcy Walker to chase her to a local club, in true Darcy fashion she stumbles upon a dead body. Thing is, this body has secrets...and Darcy's mysterious friend, Jaws, and the reporter, Tito Westbrook, have a vested interest. Both enlist Darcy to find the person responsible who has eluded them for years, but Darcy doesn't solve crimes for free anymore--especially where Jaws is concerned. Knowing Darcy's Achilles heel, Jaws blackmails Darcy into working for him.

In a true test of wills, Darcy and Jaws battle head-to-head--Jaws needs Darcy to help him end a bitter grudge war; Darcy needs Jaws to divulge the mystery surrounding her mother's death. Haunted by a past that shapes her present, Darcy will stop at nothing to get answers. Even if it means breaking the law and being disloyal to her new boyfriend, Dylan Taylor, in the process.

DEFCON DARCY gives Darcy's demons a name and ties up loose ends that make Darcy into the verb that she is. What she thinks she knows as truth, isn't. What she wishes wasn't true...is.

The problem is, when your life goes DEFCON 1, not everyone lives to tell about it. 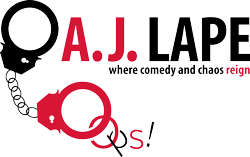 Website | Twitter for A.J. | Twitter for Darcy | Facebook | Fan Club & Street Team
Google + | Instagram | Linked In | Pinterest | Goodreads | Amazon
Newsletter Sign-up
A.J. Lape is the author of the Darcy Walker Series which has stayed on Amazon's teen's mysteries and thrillers bestseller's lists since its debut in 2012. She lives in Cincinnati with her husband, two daughters, an ADD dog, a spoiled hamster, and an unapologetic and unrepentant addiction to Coca-Cola--plus a lifelong love affair with bacon she has no plans to sever.

A graduate of Morehead State University with a Master's degree in Communications, she's a PI wannabe and recently joined the Citizen's Police Academy in her hometown but daily stops crime and kills bad people through the fictional ADHD character of Darcy Walker.

If the FBI ever checks her computer, she'll be wearing prison-orange due to the graphic and disgusting "wiki" articles she looks up...all in the name of career research, of course.