Synopsis: Jack Horwood hates owing favors. But when a simple day out to treat Gareth to the best oysters in England leads to a discovery of drugs and counterfeit money—things that neither Jack nor Gareth have the jurisdiction to handle—he has to call in help. Help that doesn’t come cheap, and that forces him to do something he promised himself he’d never do again—walk away from Gareth and the family he’s starting to make for himself.
Three months undercover is a long time. After missing Gareth’s birthday, Jack is determined not to miss their first anniversary. But coming home and being home are two very different things. So when he is asked to assist with a corporate espionage investigation, Jack can’t say no, despite knowing it will impact his already straining relationship. Except, of course, he’s walking into a trap….

When the car’s growling engine stopped, Gareth found himself surrounded by woods in a corner of the Weald he’d never been to before. The small car park was deserted except for a handful of cars, and Gareth heard only birdsong, the rustle of the breeze in the trees, and the faraway drone of a plane. They hadn’t passed any villages or farms during the last leg of their drive, and nothing around him hinted at human habitation. The car park didn’t even have a sign. “You know where we are, right?” “Would you believe me if I said we’re eight miles from Canterbury?” It was hard to imagine that a city full of tourists, bars, and shops was in hiking distance of this deserted corner of Kent. The air held the bitter, musty scents of pine and damp leaves and—barely detectable—the savory smell of mushrooms. Most of the oak and beech trees surrounding the small, graveled car park were just starting to unfurl their leaves, giving the afternoon sun almost unhindered access. Jack unlocked the boot, ready to get out of the car and retrieve the TVR’s roof. Before he could move, Gareth wrapped a hand around his neck and pulled him closer until the center console got in the way. Jack didn’t fight. He braced his elbows on magnolia leather and leaned across the barrier into Gareth’s touch. Their kiss was slow and languid, more teasing than enticing. “Really not the car for that,” Gareth commented when he leaned back to put space between them. “Though I could imagine spreading you across that bonnet.” “Yeah, let’s scandalize the locals,” Jack agreed and popped the doors. It was the third time and Gareth still hadn’t figured out how it was done. Not that he’d been paying particular attention to the TVR’s doors. Though now that he’d started thinking about the acres of bonnet, he could see that the car had potential. He turned to look for Jack, but despite having opened the boot, he wasn’t anywhere close to the car. He stood in the center of the car park, staring at a beat-up green Rover. “What’s the matter?” “Not sure.” Jack’s voice was distant. “Thing gives me the creeps.” “How?” Gareth couldn’t see anything that might have set off Jack’s warning bells. The N-plated Rover 400 showed every one of its seventeen years of hard work. Flaking paint marred the sides, hinting at rust-eaten bodywork, and one of the car’s wings had been replaced with one of a slightly different green. It wasn’t a car that invited a second look from anyone, but somehow it had immediately drawn Jack’s attention. “Jack?” He stared a moment longer before he shrugged and turned back to Gareth. “I don’t know,” he said, sounding apologetic. “Probably nothing at all. Fancy a walk?” “Since that’s what we came here for….” Gareth wanted to reach for Jack, whether to distract him or shake him hard enough to rattle some sense back into that busy brain of his, he couldn’t have said. “Was there anywhere in particular you wanted to go?” “Just… around,” Jack said as he found a narrow path that led into the surrounding woods. “Liar. And crappy at it, too. How’d you ever make it as a spook?” Gareth had merely meant to tease, but a dark flush crept up Jack’s neck, and he hunched forward. “I wasn’t that kind of spook,” he mumbled when Gareth caught up with him. “No?” Gareth wrapped his arm around Jack’s shoulders and felt him flinch at the contact. Jack was suddenly so tightly wound he was close to taking off. And that wasn’t something Gareth wanted to deal with right then. He cast around for something, anything, that could serve as a distraction. “So, what’s going on with you and that Dave character?” he settled on, glad when Jack’s head shot up and he stared, caught out. “Nothing’s going on. He’s straight.” “Bullshit. He was all over you.” The vehemence in Gareth’s tone brought Jack’s head around. The frown dissolved and the smirk appeared. “That jealousy I’m hearing, Flynn?” Gareth felt the rush of heat in his neck sweep up the sides of his face. He held Jack’s disbelieving gaze regardless. “Would you blame me?”

OTHER BOOKS IN THE POWER OF ZERO SERIES...

Synopsis: You don’t greet your new boss dressed like an underage rent boy. But when Jack Horwood—ace hacker and ex-MI6 operative—opens the door to Gareth Flynn, he's too busy to worry over details like that. And anyway, his potential new boss is his former Commanding Officer – the same guy Jack has had a crush on since he was seventeen. So he should understand, right?
When he applied for the job in Nancarrow Mining's corporate security division, Jack had hoped for peaceful days repelling cyber attacks. Maybe a bit of corporate espionage on the side. His plans didn't include rescuing abused children, hunting pimps, or dealing with his overly protective and hot-as-hell boss, Gareth Flynn. Walking away is not an option. Jack never takes the easy way out. More than that, meeting Gareth raises old ghosts that Jack needs to put to rest. Rescuing kids. Taking risks. Saving the day. Jack can do all that – but deciding what to do about his attraction to Gareth isn’t the sort of cloak-and-dagger game Jack plays well. Yet Gareth, strong and smart and always on hand when needed, might be Jack’s salvation.

Synopsis: Jack Horwood doesn’t do families. Or Christmas. From the time his mother sold him to her pimp to the moment he walked out on the man he loved, Christmas has always been about change and painful choices. This year seems no different. Helping Daniel and Nico recover from their imprisonment and hunting down those responsible puts Jack in a frame of mind he doesn’t want to inflict on anyone. Least of all Gareth and the tentative relationship they’ve started to rebuild.
But Gareth, for whom Christmas is all about new beginnings, won’t let Jack take the easy way out. He makes him face his ghosts instead. Even when said ghosts invade their bedroom. When Daniel’s parents are found, Jack is determined to settle the matter without involving Daniel at all. But fate decrees otherwise, and it’s Gareth who helps him finally understand that the strongest bonds are those forged together. Once he gets that, Jack can step up and make a decision designed to lay his ghosts to rest—for good. 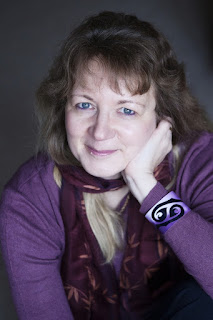 Jackie Keswick was born behind the Iron Curtain with itchy feet, a bent for rocks and a recurrent dream of stepping off a bus in the middle of nowhere to go home. She’s worked in a hospital and as the only girl with 52 men on an oil rig, spent a winter in Moscow and a summer in Iceland and finally settled in the country of her dreams with her dream team: a husband, a cat, a tandem, a hammer and a laptop. Jackie loves stories about unexpected reunions and second chances, and men who don’t follow the rules when those rules are stupid. She has a thing for green eyes and tight cyclist’s butts and is a great believer in making up soundtracks for everything, including her characters and the cat. And she still hasn’t found the place where the bus stops.