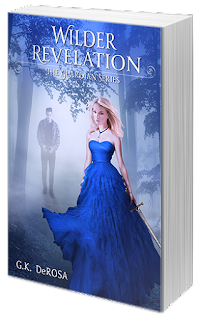 Fulfilling her destiny and becoming the Guardian has meant a world of sacrifices for Celeste Wilder, but her most difficult challenge is yet to come. The supernatural forces at play are far more powerful than she ever expected, and she will have to trust her instincts if she hopes to survive. Lilliana Constantin is back from the dead. Alek is free and somehow stronger than ever. A pack of rogue werewolves are wreaking havoc in her small town. And on top of all of this, Celeste faces what is at best an uncertain future with the love of her life.

While battling the forces of evil and saving the human world alongside Stellan and the handsome Constantin brothers has become second nature, Celeste had no idea what accepting her duty as the Guardian would actually cost her. When she faces an unspeakable tragedy, she is pushed to her breaking point. After fighting her most formidable enemies, Celeste is about to discover that sometimes the greatest evil is the one that comes from within.

Immediately after Celeste’s departure, Roman headed out the back door and into the cool wintry air. He often found solace in the quiet of the forest, and there was never a time he needed it more. The sound of his footsteps crunching through the dead leaves and the occasional squirrel scurrying underfoot was all that could be heard for miles around. He took a deep breath and to his relief found that the fury burning inside of him was beginning to dissipate.
“Are you going to follow me all day, little brother?” asked Roman as he spun around to face his unwelcome shadow.
Nico stepped out from behind a leafless tree, looking abashed. “I wanted to make sure you were all right.”
“You thought perhaps I would storm off in a rage and ravage an entire small town?” he teased, shoving his hands into his pockets.
Nico gave him a wry grin. “You have done worse…”
“Please, don’t remind me.”

Guest Post – Character Spotlight Celeste Wilder
When the series starts out in Wilder: The Guardian Series, Celeste is a typical 18 year old girl finishing up her senior year of Catholic high school. She lives in a small town called Oak Bluffs located somewhere in the northeastern US. Celeste lost her father when she was only 10 years old and is an only child living with her mom. She had always felt there was something missing in her life, but never knew what it was. She longed to have a boyfriend and loved reading and watching romance novels and movies. Her best friend is her next-door neighbor Brian, who she’s known since they were little kids and beyond him, she doesn’t have a lot of friends as she became a little reclusive after her father’s death. All she’s ever wanted was to go to college at NYU like her dad did. Then everything changes when the Constantin brothers come into town. She is immediately drawn to them, like nothing she had ever experienced before. It’s through her friendship with them that she learns about her own powers and family legacy. I don’t want to give too much away, but she becomes quite the kick-butt heroine. She is strong and smart and doesn’t like to sit around while the guys protect her. She has a few love interests as the book progresses and you’ll just have to see which eligible bachelor she chooses! 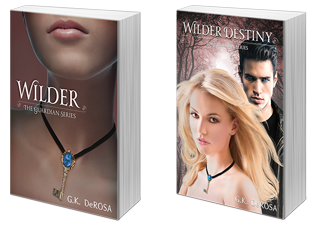 Great news! There’s a Kindle Countdown Deal on Wilder and Wilder Destiny, the first two books in the series from
March 21-28, 2016! Get your copies now! 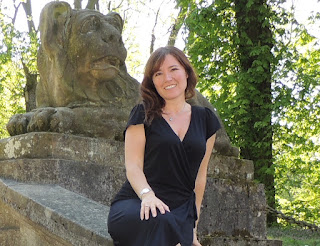 G.K. De Rosa has been an avid reader from a very young age. In fact, before she could even read, she tried fooling everyone into thinking that she could. At the precocious age of two, while living in Italy, she had memorized an entire children’s book in Italian and expertly turned the pages at the exact right moments of the story. As she grew up, she always enjoyed literature, no doubt having been instilled with a love of story telling from her early years in Catholic school where she was greatly influenced by exemplary teachers who taught her the value of English and Literature. Though she did not pursue writing in college and instead went for the more traditional route of International Business inspired by her love for travel and all things foreign, after a move to New York City, she found her creative writing side calling once again. She began writing a restaurant review blog, City Lights and Tasty Bites, detailing her other passion – food! The hectic hustle and bustle of the city, combined with long commuting times gave her the opportunity to spend more time reading and rekindled a lost love. After reading countless books in many diverse genres over the two years in New York City, and returning to her home state of Florida, she felt compelled to write something for herself. She had always felt particularly drawn to Young Adult novels and having been an eternal romantic at heart, a fantasy romance was a natural choice. She currently lives in South Florida with her real life Prince Charming and their fur baby, Nico the German Shepherd.

One (1) winner will receive a paperback copy of each of the books in the series - Wilder, Wilder Destiny, and Wilder Revelation – and a $25 Amazon gift card. (INT)