Virtual Tour w/Giveaway: Someone Like You by Jennifer Gracen

Enter to Win a Print Copy! 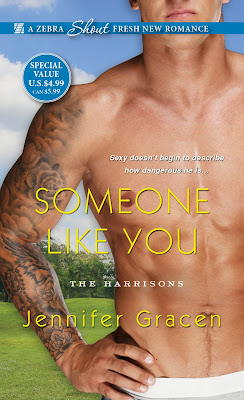 SOMEONE LIKE YOU
The Harrison's #2
Jennifer Gracen
Releasing April 26th, 2016
Zebra Shout

Pierce Harrison—yes, that Pierce Harrison, black sheep of the wealthy Harrison clan—has come home to his family’s luxurious Long Island compound. The big question is why the dangerously sexy soccer star agreed to coach a kids’ soccer team. His co-coach Abby McCord should be grateful. Instead she’s fending off some seriously smoldering advances from the scandal-ridden athlete. Good thing bad boys are so not her type . . .

Abby is definitely not lacking in passion, but the sweet-faced beauty needs to learn a thing or two about taking a team to the championship—and a whole lot about how to let a man into her once-broken heart. Pierce definitely knows how to make the moves, but will Abby trust that the bachelor the world has condemned as a scoundrel can settle down with the one woman who has taken hold of his heart?

“Pierce!” Tess threw herself into her younger brother’s arms with a yelp of astonished joy. “Oh my
God, what are you doing here? What a fabulous surprise!”
Her long mane of dark curls tickled his forearms as he returned her warm embrace and kissed the top of her head. “Hey, Tessie.” She pulled back and gave him a quick once-over.
“It’s so good to see you.”
“Good to see you, too.” In fact, he hadn’t been so glad to see anyone in a long time. Affection flowed through him as sweet as honey, and he couldn’t keep his smile from spreading. “You have no idea.”
As if suddenly remembering, her smile turned down and her brows puckered. “Yeah . . . you’ve had a hell of a few weeks, huh.”
His smile faded. “The worst,” he murmured. He gestured toward the luggage on the ground behind him, then slid her a sheepish glance. “I, uh . . . I know I should’ve called first, but can I stay with you for a while?”
“As long as you want,” Tess said without pause. She reached up and held his scruffy face with both hands. “I’m always here for you. You’re good here. On safe ground. Okay?”
His chest tightened and a muscle jumped in his jaw. “Thanks,” he whispered gruffly before pulling his sister into another hug.
“Aww, honey.” Tess rubbed his back, soothing him. He closed his eyes, drinking in the comfort. He’d needed this more than he’d realized. It felt so damn good to know someone truly cared about him, and about what he’d been through recently. Tess might be the only one on the planet who did. They each took two bags and went into her house. Within seconds, the sound of tiny footsteps and staccato barking were heard as Tess’s white Maltese burst into the room. With happy yelps, she headed right for Pierce, spinning and dancing in little circles at his feet.
“Oh, are you happy to see him!” Tess said to her dog in a singsong voice.
“Heeey, Bubbles!” He crouched down to lift the eight-pound dog into his arms. She yipped and wiggled happily. “Hi, girl. How ya been? You’re good? Yeah, you’re a good girl,” he cooed as he stroked her soft fur. After a minute of this, he released the dog carefully onto the hardwood floor and rose to stand again.
“She missed you,” Tess told him.
“She always loved me,” Pierce said with pretend swagger.
“I never saw a woman who hasn’t,” Tess cracked.
Pierce snorted as the grin faded from his face. “I met one recently who didn’t. . . .”
“Jesus, I’m sorry.” Tess shook her head at herself. “I didn’t mean to—”
“Of course you didn’t, stop it.” Pierce scrubbed a hand restlessly over his face and sighed.
“So take your things up to whichever room you want and settle in,” Tess instructed. “Take a shower if you want, unpack a little, but we’re leaving in half an hour.”
“We are?”
“Yup. Your timing is incredible. Big family get together up at the main house at four o’clock.” She pointed a finger at him as soon as he opened his mouth to speak. “Don’t even try to say you’re not going. I’m insisting.”
Pierce scowled. “Seriously? I haven’t even been back here for ten minutes and you’re making me put in an appearance at the palace? This sucks.”
“Think of it as getting it over with,” Tess cracked.
“Dane requested a family gathering. He’s been away for a few weeks and asked us all to meet there for dinner.”
“Command performance?” Pierce bent to lift two of his overstuffed duffel bags.
“It’s a little odd, I’ll grant you that,” Tess said. “He hasn’t been away on business, he’s been on vacation. He took Julia on a cruise of the Greek islands. It was supposed to be for two weeks, but they stayed for three. They just got back the day before yesterday.”
Pierce knew that his brother Dane, who had never committed to a woman in his life, had fallen head over heels in love with Julia Shay, the singer at one of his swanky Manhattan hotels. “He’s still with her?”
“It’s been a year now,” Tess marveled.
“Wow. Maybe they got engaged or something.”
“That’s exactly what I was thinking. I hope we’re right. She’s lovely,” Tess said, smiling. “And she’s good for him. I’ve never seen him so happy.”
“Must be, if he’s been with the same woman for more than a few weeks.” Pierce headed for the stairs that led to the three guest rooms on the second floor. In a pretend snooty voice, he said, “The blue room all right with you?”
“Of course.”
He made it halfway up the stairs when Tess asked him, “Pierce? Just curious. How long do you think you’ll be staying?”
He turned back to look at her. Tess’s bright blue eyes, exactly like his and his brothers’, stared at him with barely concealed worry. He knew she was concerned for him, and felt bad about that. Rubbing the back of his neck, he said quietly, “I’m not sure, Tessie. I, uh . . . I need to regroup. Thought maybe I’d do that here for a while. Sure that’s okay?”
“Of course it is,” she said. “You stay as long as you want. I mean it.”
“Thank you.”
“But you’re coming with me to this family dinner. They’ll all be shocked and glad to see you. So get it in gear, Soccer Boy.”
He grinned at the nickname she’d called him since childhood. The relief and comfort he felt just being in her presence was almost overwhelming. “Fiiiine. Anything for you. Jumping in the shower, give me twenty
minutes.” 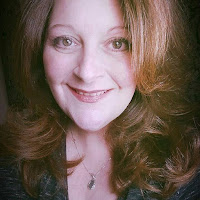 Jennifer Gracen hails from Long Island, New York, where she lives with her two young sons. After spending her youth writing in private and singing in public, she now only sings in her car and has fully embraced her lifelong passion for writing. She loves to write contemporary romance and romantic women’s fiction for readers who yearn for better days, authentic characters, and satisfying endings. When she isn’t taking care of her kids, doing freelance copy editing/proofreading, reading, or talking to friends on Twitter and Facebook, Jennifer writes. She’s shocked her family hasn’t yet staged an intervention for her addiction to social media. But the concerts she gives in her car and the dance parties she has in her kitchen are rumored to be fabulous.