The first book in Laura Kaye's hot new Raven Riders Motorcycle Club series, RIDE HARD, is finally here! RIDE HARD is about a new kind of MC with a protective mission. You might’ve first met the Ravens in the Hard Ink world, but this series stands on its own and is even sexier, edgier, and grittier! So read on for a taste and grab your copy of the first book in this sexy new series!

Add to your Goodreads 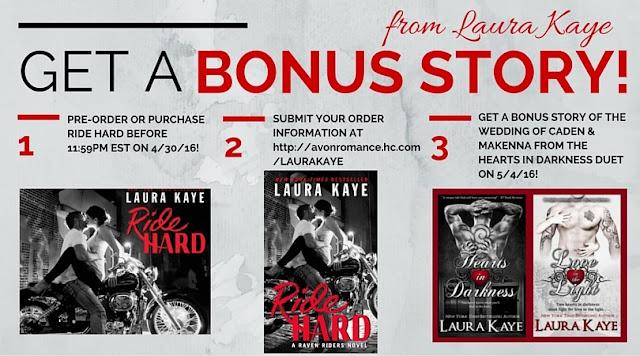 Get a FREE bonus story from Laura’s Hearts in Darkness world for buying RIDE HARD before April 30!

About Ride Hard (Raven Riders #1):
Brotherhood. Club. Family.
They live and ride by their own rules.
These are the Raven Riders…
Raven Riders Motorcycle Club President Dare Kenyon rides hard and values loyalty above all else. He’ll do anything to protect the brotherhood of bikers—the only family he’s got—as well as those who can’t defend themselves. So when mistrustful Haven Randall lands on the club’s doorstep scared that she’s being hunted, Dare takes her in, swears to keep her safe, and pushes to learn the secrets overshadowing her pretty smile.
Haven fled from years of abuse at the hands of her criminal father and is suspicious of any man’s promises, including those of the darkly sexy and overwhelmingly intense Ravens’ leader. But as the powerful attraction between them flares to life, Dare pushes her boundaries and tempts her to want things she never thought she could.
The past never dies without a fight, but Dare Kenyon’s never backed down before…

Don’t forget you can grab HARD AS STEEL, a Hard Ink/Raven Riders Crossover Novella out now and pre-order RIDE ROUGH, book 2 in the Raven Riders Series (out April 25, 2017)! 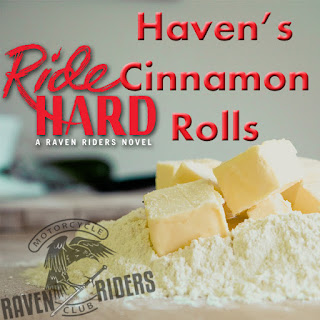 I’m thrilled to be celebrating the release of my 25th novel, Ride Hard, the first book in my Raven Riders Motorcycle Club series about a new kind of MC with a protective mission. You might’ve first met the Ravens in the Hard Ink world, but this series stands on its own and is even sexier, edgier, and grittier! I can’t wait for you to get to know Dare, Haven, and everyone in the Raven world! And see down below for a giveaway and a bonus story offer!

One of the things that surprised me about Ride Hard was that food became a major theme throughout the book. Haven suffers from insomnia and baking is one of the things that calms and distracts her, so sometimes she sneaks down to the clubhouse’s kitchen in the middle of the night and bakes whatever sweet thing comes to mind. Cinnamon rolls and peanut butter cookies are two of her favorites (and Dare’s, too!), and she loves leaving these treats for the guys in the club to devour in the morning. Because you might find yourself hungry while reading *winks*, I thought you might enjoy Haven’s recipe for cinnamon rolls—and since I am not much of a cook LOL, I turned to my good friend and fellow author Christi Barth, who is an excellent cook, for her take on cinnamon rolls, very similar to what I describe in the book:

What makes these cinnamon rolls super easy is that they have to sit overnight - which means you don't have to get up at the crack of dawn to start cooking for a crowd of hungry bikers.

Dissolve yeast, 1 teaspoon sugar & the warm water in a bowl and let stand for five minutes or until small bubbles foam on the top of it. In a large bowl, blend flour, 1/4 cup sugar, nutmeg, cinnamon, cloves and salt. In another bowl combine 2/3 cup milk, water and egg. Once thoroughly mixed, add yeast and flour mixture (1 cup at a time) into it until it forms a dough ball.

Lightly flour your counter, and then knead dough on it for about 6 minutes. Coat a bowl with non-stick spray, put dough in it and cover. Let dough rise until doubled (at least an hour).

Roll dough out to an approximate 10" x 20" rectangle. Gently spread the butter over the dough, then sprinkle with brown sugar and cinnamon. If you like nuts, you could add 3/4 cup chopped pecans. Roll up, starting with the long side. Slice roll (a bread knife works best) into 12 1" thick pieces. Put in two buttered cake pans, with 1 slice in the middle and 5 ringing it. Cover with plastic wrap and let rise in the refrigerator at least overnight, but up to an entire day ahead. Bake at 375 degrees for 24 minutes.

Whisk together powdered sugar and milk with a fork. Drizzle over rolls while still hot.

Thanks for reading!
Laura

About Laura Kaye: Laura is the New York Times and USA Today bestselling author of over twenty books in contemporary and paranormal romance and romantic suspense, including the Hard Ink and upcoming Raven Riders series. Growing up, Laura’s large extended family believed in the supernatural, and family lore involving angels, ghosts, and evil-eye curses cemented in Laura a life-long fascination with storytelling and all things paranormal. She lives in Maryland with her husband, two daughters, and cute-but-bad dog, and appreciates her view of the Chesapeake Bay every day.