Crave your men hot, alpha, and strong? Then fall in love with Hotshot Heroes: Strong Enough to Love

6 full-length action-suspense romances plus one bonus novella from NY Times, USA Today, and International bestselling authors. Fall in love with sexy agents, cowboy sheriffs, firemen, bikers, and more. Danger, excitement, and heart-pounding romance await the women who love these brash and protective men. Get yours today. 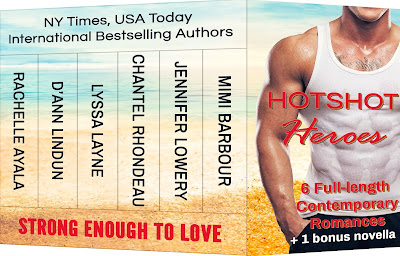 In this electrifying romantic suspense set in the steamy streets of New Orleans, Lieutenant Commander Nik Baudin accidentally meets up with an identical twin he never knew existed. When his brother Max goes missing, Nik assumes his identity as Special Agent Maximilian. This gives him access to FBI files making it easier to arrest the gangsters who attacked his brother and to stop their trafficking of underage girls. Being that Nik has specialized commando training, he’s the perfect man for the job - that’s if his PTSD doesn’t kick in and leave him cowering in a corner.

Special Agent Maya Barnes can’t believe it when she spots her partner, Max Foster, wandering along the French market without a care in the world. Since he’d been beaten and had gone missing weeks earlier, they all believed him dead. There’s only one problem… though this man might look exactly like the missing agent, she knows differently. In all the years they’ve worked together, she’s never wanted to have mind-blowing sex with her partner before.

Home is the last place Jon Murphy can go. After being held captive in Azbakastan, he returns to the States only to find he can’t face his mom and sisters with what he did while he was a prisoner, so he retreats to the mountains.

Widow Sara Sheldon has made a lifetime of mistakes and is now running scared from her husband’s powerful family, who are determined to take her daughter away from her. When her little girl goes missing in the Rockies, Sara enlists the only help she can find: a gruff recluse with tracking skills to admire and a body to covet.

A storm strands Sara and her daughter at Murphy’s cabin, leaving her no choice but to hope her in-laws don’t catch up while she plans where to run next. Murphy resents the invasion of his privacy, but can’t seem to keep his mind--or his hands--off Sara. How can she stand to look at him, with all his scars? He’s not nearly as honorable as she might think…only enough to make sure she’s safe, and then he’ll go back to being alone, the way he should be.

Former bad boy and firefighter Frankie Hernandez struggles to recover from debilitating injuries sustained during his last fire. Physical therapist Cassie Flick is at her wit's end with the handsome hunk, conspiring with his friends to get Frankie’s life back despite his intense pain. Those plans get derailed when she receives a delivery from an unknown source. Roses are sweet, but a note inside them threatening Cassie isn’t.

There’s a killer loose in Sayle, Washington, and Frankie isn't about to let Cassie face this threat alone, no matter what it costs him physically. The more time they spend together, the closer they become and the higher the stakes are for Frankie to overcome his disabilities and protect her. Together they race to discover who’s killing women in their city, fighting to solve the mystery before Cassie becomes the next victim.

My Calling by Lyssa Layne

Fresh out of paramedic school, Saylor Warner can’t wait to start saving lives. At sixteen, she watched the man who raised her be gunned down and stood by unable to do anything except shed tears and watch her uncle die. It’s taken her six years to be able to fulfill her calling of helping others but the day has finally arrived and she’s ecstatic.

Jonathan “Beck” Beckerdyte isn’t exactly what you’d call a people person. He’s spent the last six years trying to stay out of the public eye but now, his calling has led him into the field of civil service. Less than excited about his new job riding in a rig all day and attending to medical emergencies, Beck deals with it because he’s made it his mission to watch over Saylor Warner… except Saylor doesn’t know that.

Jamie English has sworn off all men because she was left by her teenage sweetheart to raise their daughter on her own. When Jamie’s father—the sheriff—is shot, he names Jamie as interim sheriff. She seeks help from CBI Agent Austin Varner, who is still shaken after the death of his last partner. However intrigued he is by the sexy, blonde sheriff, the agent keeps his feelings strictly professional. As they follow a trail of clues that leads into the Colorado Mountains Jamie and Austin dodge a killer and fall in love.

Playing Without Rules (A Baseball Romance) by Rachelle Ayala

Marcia Powers has more than she can handle with an elderly father, a business to run, and a four-year-old daughter posing as her baby sister.

Brock Carter’s back in town to rekindle his romance with Marcia, and this time, he’s not letting her run him out of town. Marcia is unable to resist Brock, but determined to keep her secret.

Brock’s already lost his heart to Marcia once. Will he lose every dream, including baseball, when he discovers the real reason Marcia sent him away?

Florist Terri Martin lives a calm and peaceful life. Maybe too calm and too peaceful because she can’t remember the last time she was in a relationship.

Terri calls Bad Boys for Hire to book herself a date for her thirtieth birthday party, but before she can hire one, she meets Ryker Slade and his bad-ass motorcycle.

Old vendettas resurface and soon, Terri has more than she can handle when she learns that her and Ryker’s love is as doomed as Romeo and Juliet’s.

Ryker thinks he has a way out, but can Terri escape her fate, or will she find her lover dead before she wakes? 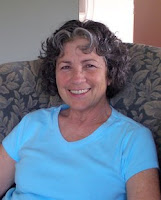 Mimi Barbour is an incredibly busy New York Times, USA Today and award-winning, best-selling author who has five series to her credit. The Vicarage Bench Series – Spirit/Time -Travel tales that have a surprising twist / The Angels with Attitude Series – Angels Love Romance / The Elvis Series – Make an Elvis song a book / Vegas Series – 6 books full of romantic suspense, humor and gritty conflicts / and… the fast-paced, edgy yet humorous romantic suspense, Undercover FBI Series. She also has numerous box collections and single titles to add to her credits. Mob Tracker is a new series she’s working on now which will be published in 2016.

Mimi lives on the East coast of Vancouver Island with her loving husband and a son who makes her glad she was born a woman. Also has a niece whose family adds greatly to her enjoyment of life, and she's a happy soul. Gardening lights her inner fires, but alas, there's just not enough time to be outside when fictional characters vie to be heard.

NY Times & USA Today bestselling author, Jennifer Lowery grew up reading romance novels in the back of her math book and on the bus to school, and never wanted to be anything but a writer. Her summers were spent sitting at the kitchen table with her sisters spinning tales of romance and intrigue and always with a tall glass of iced tea at their side.

Today, Jennifer is living that dream and she couldn’t be happier to share her passion with her readers. She loves everything there is about romance. Her stories feature alpha heroes who meet their match with strong, independent heroines. She believes that happily ever after is only the beginning of her stories. And the road to that happy ending is paved with action, adventure, and romance. As her characters find out when they face danger, overcome fears, and are forced to look deep within themselves to discover love.

Jennifer lives in Michigan with her husband and two children. When she isn’t writing she enjoys reading and spending time with her family. 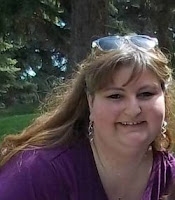 Best-selling author Chantel Rhondeau once thought a great mystery or fantasy book with strong romantic themes was the highest level of reading bliss. After reading her first romantic suspense novel, she never looked back. Chantel is author of seven romantic suspense novels, three Christmas novellas, and the contemporary romance McCallister’s Paradise series. She lives in the western United States, and when she's not writing she loves playing cards with her family, bowling on leagues, and snuggling with her lazy kitties.

Lyssa Layne is a blogger turned author after being inspired by Rachelle Ayala. She enjoys hot romances and loves to shock her readers right until the final page. Lyssa enjoys chasing after her four-year-old daughter, being a tourist in her own city, and anything involving peanut butter. 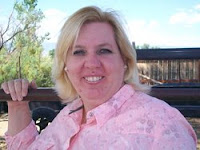 Falling in love with romance novels the summer before sixth grade, D’Ann Lindun never thought about writing one until many years later when she took a how-to class at her local college. She was hooked! She began writing and never looked back. Romance appeals to her because there's just something so satisfying about writing a book guaranteed to have a happy ending. D’Ann’s particular favorites usually feature cowboys and the women who love them. This is probably because she draws inspiration from the area where she lives, Western Colorado, her husband of twenty-nine years and their daughter. Composites of their small farm, herd of horses, five Australian shepherds, a Queensland heeler, two ducks and cats of every shape and color often show up in her stories! 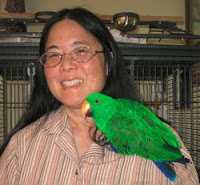 Rachelle Ayala is a bestselling author of contemporary romance and romantic suspense. She writes from sweet to steamy and believes that everyone should find love as often as possible, even if it's within the pages of a book. Rachelle is working on a sweet series of romances with pets and firemen, Have a Hart Romances, and one full of bad boys, Bad Boys for Hire. She also writes sports romances in both football and baseball, as well as many holiday romances, both sweet and spicy.