An Unexpected Triad
by Kasey Belle

Enter below for a chance to win Copper Creek Pack Box Set
(Their Cajun Queen-Book 1, Prideless-Book 2, Healing Cathy-Book 3)
and a $5 Amazon Gift Card from Kasey Belle! 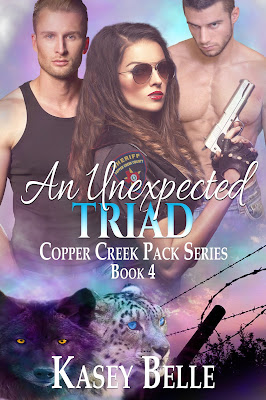 Kell Creed was born to protect others. As a Navy SEAL, his duty was to protect his country and his team. As head enforcer for Copper Creek, his duty is to protect his pack. An impromptu meeting with a council emissary brings danger to the pack. It also brings him that much closer to a mate and family of his own.

Gunnar Stanton, bounty hunter and emissary for the US Pack Council, is on the hunt for a rogue werewolf and the trail leads to Copper Creek. As a hybrid shifter he’s endured his share of prejudice and hatred from the preternatural community. Needless to say, he is completely shocked when Kell’s pack not only accepts his presence, but embraces him as a member.

For a decade, Jennifer Alvarado has helped keep the mean streets of Las Vegas safe. When violent crime hits too close to home, she applies for a position with the Copper Creek Sheriff’s Department. Little did she know, it wasn’t just the promise of employment and a low crime rate awaiting her in the small Texas town―it was a whole new fated life.

When Kell and Gunnar meet their mate―CCSD Deputy Jennifer Alvarado―they realize the Fates truly do have a sense of humor. Two shifters whose very nature demands they protect those around them, end up with a mate whose job is to protect and serve and... she’s damn good at it. How do two dominant shifters come to terms with having a mate whose job constantly puts her in danger? …Especially when bodies start piling up. 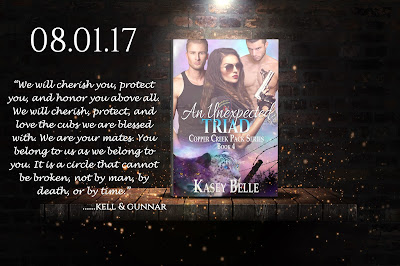 Kell Creed is head enforcer for Copper Creek. Part of his duties is meeting with US Pack Council representatives. He meets with Gunnar Stanton and expects him to be a complete ass like most emissaries. Instead of an enemy, he ends up with a mating partner.

Gunnar Stanton, bounty hunter hunting a rogue werewolf and also an emissary for the US Pack Council. He never expected to have a mating partner let alone a mate. So Kell comes as a shock, as does the acceptance he finds in Copper Creek.

Jennifer Alvarado starts out as a Las Vegas Metro Officer. When violent crime affects her and her daughter in an extremely personal way, she decides Vegas isn’t the place for them anymore. She applies to the Copper Creek Sheriff’s department as a deputy. (The open positions discussed in Healing Cathy.)

She ends up finding quite a different life than the quiet one she expected. Two mates, a psycho murdering werewolf, and an extended family of shifters.

This book was, of course, inspired by the first three books in the series. I had to give Kell his HEA per many of my readers. Most of them fell in love with him the second he was introduced. However, there are certain plot points inspired by my best friend, Jen. Who was a single teenage mom. I always thought she would make a great heroine.

Tell us little about the characters in An Unexpected Triad, Copper Creek Pack Series Book 4.

Kell Creed: Ex-Navy SEAL and Head Enforcer for the pack. He’s lethal, but also a giant teddy bear. He isn’t afraid to show his softer side. He adores the women in his life. He’s a total woobie. A hero.

Gunnar Stanton: Is a hybrid shifter, part wolf/part snow leopard. He’s also an emissary for the US Pack Council. He’s English and all the men of Copper Creek are jealous of his 007 accent. He’s never had a place to call home. His character was inspired by all those people certain a-holes in society deem different therefore unworthy of respect and love.

Jennifer Alvarado: Balls to the wall cop. She’s strong, independent, and deadly. She’s not afraid to be feminine. She hasn’t always had it easy (she became a mother at 15). She proves less than ideal circumstances don’t control you, but make you stronger.

Maintaining the character’s personalities. The main goal is for the characters to come together in a loving menage, but you don’t want them to lose themselves as individuals.

The chapter where Lada confronts Kell and Gunnar. It shows that children are just as protective of their parents and that it’s okay to speak up and demand to be heard, especially if you are an adolescent.

Mating Mal, CCP Book 5 will be out at the end of the year. 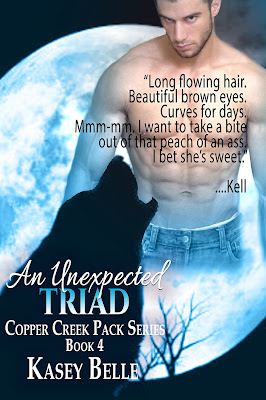 Kell whooped and pushed Gunnar out of the way making him growl. Kell leaned down, put his shoulder to her midsection, and stood. She giggled as she hung upside down over his shoulder. He raced out of the room. She braced herself with her hands on his belt and pushed up to see Gunnar following them with a goofy grin. Unable to resist Kell’s tight sexy butt, Jen smacked it then bit it, eliciting an un-masculine yelp from the ex-SEAL. He landed a hard smack on her bare ass in return.

She winked at Gunnar. “You don’t scare me, Navy boy.” Jen began to sing a horrible off-key rendition of In The Navy.

He smacked her other butt cheek and rubbed her skin to hold in the heat. Her pussy clenched. Man that felt awesome, who knew? She heard them both growl and sniff the air.

Gunnar reached out and ran a hand over her hair. “Someone likes having their arse spanked, brother. I can’t wait to see what else our sexy mate likes.”

Kell kissed her hip. “We know she likes it when we eat her pussy and smack her ass. It’s a great start. Get the door will you?”

Gunnar rushed around them and opened the dark, ornately carved wood door. Jen heard the rustle of fabric before Kell dumped her unceremoniously off his shoulder and onto the bed. The noise she heard was Gunnar pulling the comforter off the bed. She laid there, sprawled half naked on the cold blue sheets that felt more like silk than cotton, and the men stood over her eyeing her like a steak dinner. Kell’s eyes glowed amber and Gunnar’s both amber and electric blue. Gunnar grabbed her ankles and pulled her ass towards the edge of the bed.

“We are both going to claim you together, but first, I’m going to make you scream.” Gunnar fell to his knees, pushed their legs wide to accommodate his shoulders, and lifting her hips, dove forward to bury his face in her cunt. Kell climbed onto the bed and laid beside her on his side, resting his head in his hand. He massaged her breasts and leaned over taking a hard nipple into his mouth. He sucked and tongued it while rolling and pinching the other. Jen arched and bucked as Gunnar thrust two thick fingers into her slick channel and sucked her clit. Gunnar used the pads of his fingers and brushed over her G-spot, and Jen screamed, crying out a litany of Oh, gods and fuck yesses. She writhed against Gunnar’s mouth, tilting her hips as he scraped his teeth over her tiny bud. The muscles of her pussy clamped viselike down on his fingers as orgasmic pleasure overtook her.

She opened her eyes, and they connected with Kell’s. His reverent smile brought tears to her eyes. “You are so fucking gorgeous when you come. I am in awe that the Fates chose you for us. We are two lucky bastards. I love you, baby.” 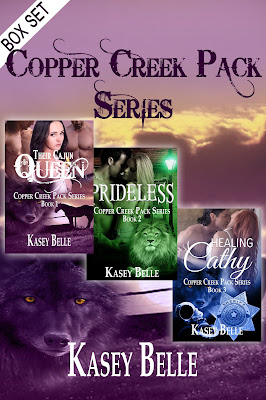 Independent Author Kasey Belle, whose sarcastic tendencies and faulty filter will most likely lead to an untimely death, is a southern belle with a sexy imagination.

In 2006, tired of hurricanes and mosquitoes “The Belle” family moved on up, to the west side of the MS, to Las Vegas. Kasey currently lives there with her sweet southern boy/husband, the infamous “Outlaw”, in their newly acquired empty nest. She is the mother of two grown children and grandma of a 2-yr-old fur-baby (cat) named Cosmo.

Kasey promises her readers few things: sexy, woobilicious alpha males; strong, snarky, sarcastic, sassy heroines; lots of hot, steamy sex, and a happily ever after. Other than that, the sky’s the limit, Kasey will fly as high as her little, kinky heart desires. In Kasey’s opinion, a good romance, is raw and honest, limited only by the author’s imagination, not dictated by what society deems as normal. Love is love, and all forms are beautiful.

When Kasey isn't writing and perfecting her craft, she is spending time with family/friends or kicking back with a bottle of Moscato. Kasey admits she's addicted to tattoos and books, and won't be seeking help