Virtue and Honor
by Randi Perrin

Enter below for a chance to win a $10.00 Amazon GC
from Randi Perrin! 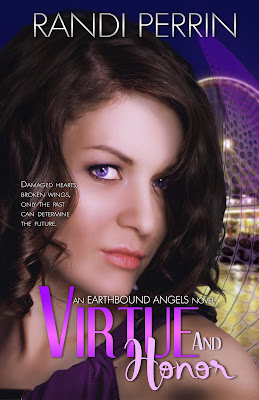 Angela Waters juggles two high-stress jobs: nurse and earthbound angel. On a rare girls’ night out, she intervenes and saves the life of Mason Kearney, a stripper with southern charm and a secret. It’s a move that will force her to contemplate why in all the heavens she puts up with the injustice of being an angel, which leads to a bombshell that challenges everything she’s ever known.

In the midst of falling for the Alabama boy, she’s in for the fight of her life when a demon, hell-bent on taking her wings, shows up at the most inopportune times.

With a family of angels rallying behind her, she’s sent on a mission to learn everything about them, herself, and evil, to save all the earthbounds from an untimely demise.

Can Angela survive with her heart and her wings intact? 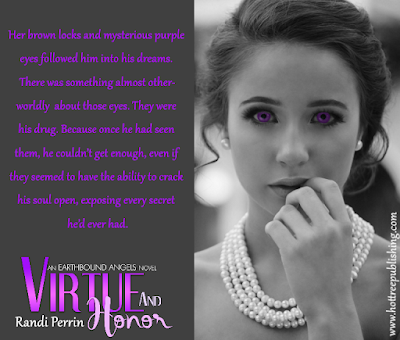 Tell us about Virtue and Honor.

Virtue and Honor is the third in the Earthbound Angels trilogy, and it was the hardest to write, by far.

This one is the story of Angela, yet another Earthbound Angel who finds there’s a lot more about her being an Earthbound than she expected… and just when she gets that bombshell, she’s thrown for a few more loops: she meets this sweet, southern boy who sweeps her off her feet and she finds out that there’s a demon gunning straight for her wings. Both her heart and her wings are on the line, and it’s going to take a whole lot of searching to find the answers.

What initially inspired you to write Virtue and Honor?

The series was always going to be a trilogy. Of course, I had no clue what the third one was going to be for the longest time. But, I think the reaction I got from reviewers about the bombshell at the end of Promises of Virtue pushed me in the direction of following this character.

But I knew there had to be a third one. There were never really a lot of lingering questions in Virtue of Death or Promises of Virtue, but I always felt there was more of a story to tell.

Tell us little about the characters in Virtue and Honor.

Angela is the main character, and she’s younger, at twenty-one. I’d taken a look at Earthbounds who had done it for years with the first two books, so I wanted to take a look at it from a more naive approach. She’s an emergency room nurse, who is a bit reserved and inexperienced due to her Catholic-school upbringing and suffering a huge loss.

Mason is a southern boy living in Chicago working two jobs to make ends meet. He’s a general contractor and a stripper. He’s truly the stripper with a heart of gold, and he makes no apologies for it, which I love about him. He’s comfortable with who he is, take him or leave him.

And, of course, Sera, Destin, Cheryl, and Luc all make appearances as well. The second book in this series built on the characters introduced in the one that came before it, so this was no exception.

What was the hardest part of writing this book?
There were a lot of hard parts to writing this book. I had a hard time “getting to know” Angela and Mason, so until it all fell into place, sometimes writing them was an uphill battle.

Honestly, I think the hardest part was managing an ever-expanding ensemble cast. Each of the main characters from the first two books are included, and just as in Promises of Virtue, they play an integral role in the book. It’s a balancing act of giving them enough time that their appearance advances the plot, but that they don’t divert attention from the new main characters.


There are a lot of really fun parts in this one. But there’s a scene in his garage that was inspired by real events in my own that had me laughing so hard tears were streaming down my face. My friend begged me to work it into a book. I’m nothing if not accommodating.

For the first time in a very long time, I actually do not know.
That’s not true. I do have another novella coming out later this summer called Mi Amor. I had another one just come out a couple weeks ago called Anticipating Temptation.

There are a couple other projects that have been submitted, but I know nothing of their fate as of present.

This is it y’all. The third, and final, Earthbound Angels book. I know some people will be sad to see this come to a close, even me. But it’s time to move onto something new. I’ve loved every minute of these characters, these stories, and I really hope y’all do too. (Oops, my southern is showing.) 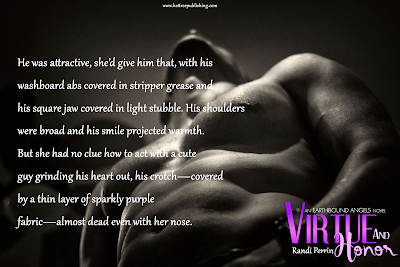 A low click echoed in her ears. The people around her acted oblivious to the sound, but it rattled through her, setting every nerve in her body on fire. It was the sound of a cocking gun, and she swallowed hard. After three years of working miracles, her boss must have expected her to be desensitized to the sound, but she was not.

The sound of the trigger as it moved backward was enough to cause her heart to leap into her throat, followed by the explosion that came as a bullet exited the chamber. Each painful second moved in slow motion, the bullet slicing its way through the air, a path set straight for the sweaty chest of the guy who had smiled at her moments before.

Ignoring the eyes that might be on her, she wrapped herself in invisibility, and let out her wings as she jumped into the air. Drawing attention to herself by disappearing in front of them was a huge risk, but as the piece of metal tore through the air, she had no other choice. If she was chastised later for her actions, so be it. She wasn’t going to let a bullet take someone, not on her watch.

She made contact with him, slamming hard into his chest and wrapping her arms around him. A searing pain spread across her shoulder, and she bit her lip as hard as possible to keep herself from making a sound as they fell to the ground. The last thing she needed, in addition to everything else that night, was for him to know she was there.

Fluttering her wings, she tried to ease their descent to the floor, but her left wing remained still. Something was wrong—very wrong 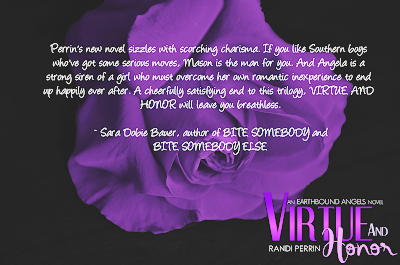 I was priviledged to receive an ARC of Virtue and Honor and here is my review!


Angela Waters juggles two high-stress jobs: nurse and earthbound angel. On a rare girls’ night out, she intervenes and saves the life of Mason Kearney, a stripper with southern charm and a secret. It’s a move that will force her to contemplate why in all the heavens she puts up with the injustice of being an angel, which leads to a bombshell that challenges everything she’s ever known.

In the midst of falling for the Alabama boy, she’s in for the fight of her life when a demon, hell-bent on taking her wings, shows up at the most inopportune times.

With a family of angels rallying behind her, she’s sent on a mission to learn everything about them, herself, and evil, to save all the earthbounds from an untimely demise.

Can Angela survive with her heart and her wings intact?

Virtue and Honor was the third book in Randi Perrin’s series Earthbound Angels which she left the best for last! This was a very hard book to put down my eyes were sagging and vision was blurring for being tired or I could have finished it in an evening. Mason is the perfect southern gentleman who any girl would go gaga over even with a past like he had he still had a wonderful heart. Angela was a combination of her father, mother, aunt & uncle she was remarkable. I don’t want to give anything away but if you have read the other two books in the series you may have a hint of who I am talking about. Which came a shock when I got a couple of chapters in but was delighted about who her family was. After reading three previous book by Randi I was not disappointed she has a way to draw a reader in a book make the reader feel they are experiencing the characters story with a few giggles & tears If you are looking for a paranormal with shifters but about angels I recommend you pick up a copy of Virtue and Honor today and find out why it was such a hard book to put down & discover true love conquers all! Thank you Randi for such an excellent series I am so sad it is coming to an end.

Randi has spent her entire life writing in one form or another. In fact, if she wasn't writing, she'd likely go completely and utterly insane. Her husband has learned to recognize when the voices are talking in her head and she needs some quality time with an empty Word file (the key to a successful marriage with a writer).

She lives with her husband, daughter, and four-legged children (all of which think they are people too).

A pop culture junkie, she has been known to have entire conversations in movie quotes and/or song lyrics.