Reana Malori and Michel Prince will be awarding a $15 Amazon or Barnes and Noble GC to a randomly drawn winner via rafflecopter during the tour. Please visit GoddessFish.com to follow the tour, remember the more you comment better your chances on winning. 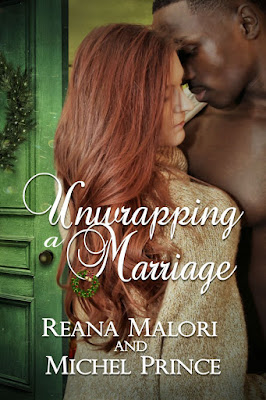 What do you do when the love that once set you free, feels like it’s holding you prisoner? Sterling and Elizabeth Jackson have built a life most would envy. A beautiful home, two wonderful children and a very comfortable lifestyle. Yet something is tearing them apart. With divorce looming, they are trying to make it through the holiday season for their family.  With clashing schedules, demands from employers and two busy kids, the former lovers have managed to stay out of each other’s orbit, at least for a while. But Fate, or maybe their well-meaning family, has set them up on a collision course. Past memories bubble up to the surface and there’s nothing to stem the flow. What once was amazing has turned hurtful and full of pain. But is that the real story? Is it too late for a couple who once lived and breathed for each other to find their way back? There’s a thin line between love and hate. Will Sterling and Elizabeth be able to mend a love that seems broken and lost, or will the final pull on the holiday ribbon unwrap their last chance to save their marriage.

Somber music started playing from the den and Sterling felt a pull to find out what Beth was doing. They’d spent too many nights ruminating within their own thoughts to ever know what the other might be thinking. This was their problem. Why had he come home determined to find a way to get his wife back, only to go into a separate room?

Rounding the corner, he saw her sitting amongst a pile of toys almost reaching the ceiling. Wearing only a tan oversized sweater and pair of fuzzy socks, she looked snuggled in amongst the presents she was wrapping. On the floor where she sat was her half-full glass of white wine, along with the plate of cheese, crackers, sausage and wrapping paper she was measuring. He smiled when he noticed the grapes were all gone.

“I’ve heard of divorcing parents spoiling their kids to compensate for the loss, but don’t you think you went a little overboard?” Sterling asked as he stood in the doorway of the den

Beth didn’t look up from the task at hand. Instead, the hiss of the scissors slicing through the paper disrupted the music. “If you must know, divorcing parents also forget important things, like their kids presents. Sadly, not one of these are for our children.”

“Then why are you being an elf?”

“Because Christine couldn’t be bothered with it I guess. Too much planning for her big trip back home to San Diego to think about the kids in Chicago.” Beth finished taping the paper to the box and then picked up an empty sheet of labels. “Damn it.” She stretched her neck and hunted around without getting up.

Sterling saw a pile on the desk across the room and pointed to them. “Those what you’re looking for?” he asked, a bit afraid to enter the Tetris like maze Beth had created.

“Yes,” she said as she pulled herself up.

Then he caught a glimpse of the crest of her ass right before the sweater dropped to her thick thigh. Sucking in his lips, he felt his hands tingle imagining the feel of it again. Tasting his way from the back of her knee around front as he worked his way to her core.

Jeanie Johnson and Jayha Leigh. They also write interracial /multicultural romance and through their books I discovered that romance novels can have angst, humor, heartbreaking moments, and heroines that were just as strong as the hero’s. Plus, all of the heroines, who happen to black women, are smart, educated, loving to their family and friends, and give as good as they get. Their stories inspired me, not only as a reader and ultimately a writer, but as a woman.

Michel-I hate cleaning. I know for some people it’s therapeutic and in a way I guess it is for me too. Usually if my house is clean then I either have writers block or someone has really upset me.
Reana – Taking naps. I fight it tooth and nail like I’m a three-year old child who had to turn off their favorite cartoon right when it was getting good. I always feel like I’m going to miss something when I take a nap (which I don’t do often). It’s so funny. Sometimes our bodies need naps, but I don’t have to be happy out it.

Share a funny incident in your life.
Michel-While in Nashville for A Weekend with the Authors the goal and “hash tag” for the western party was to “keep Michel in her dress.” It was a new dress and I thought Reana had tied me in well enough, but apparently my girls just kept wanting to come out to play.

What's your pet peeve?
Reana – it’s so corny, I know, but when someone sneezes, coughs, or yawns and doesn’t cover their mouth.

Michel-Music is great, for this Reana did make a playlist, but I tend to have my music on a loop.
Reana – Definitely music. It helps me relax and gets me in the general mood for writing. It becomes white noise, but helps keep my creativity going.

Who was your favorite hero/heroine?

Michel-Rhage from the Black Dagger Brotherhood, putting his sexiness aside, he makes me laugh.

Michel- I had the opposite happen. For some reason I love falling for the bad guy in my paranormal books. What can I say the hero has his heroine and the bad guy has a little bit of good in him.

Reana – Oh yes, a couple of times. Even with Unwrapping a Marriage started to veer off a little bit. For me, I may have a general idea of how I want my character to behave, but they usually have their own ideas. I’ve quickly learned, when I want to go right and the character decides to go left, we’re going left.

Reana Malori writes Contemporary novels focusing on Multicultural / Interracial Romance. She firmly believes that love in all its forms should be celebrated and her stories reflect that belief. She hopes to weave stories that pull the reader into her world and helps them to share in her universe, even if only for a short time.
An avid reader since the age of 14, she decided to pursue her passion in 2009 and released her first novella, To Love a Marine. Since then, she has released more than 20 books, to include Weekend Fling, Escape to Heaven, Closer to You and Finding Faith.
When she is not writing, you can most often find her enjoying a good book as she is, first and foremost, a romance reader. Reana currently resides in Montclair, Virginia with her husband and two sons who keep her busy laughing, having fun, and making sure she doesn’t take herself too seriously.

Michel Prince is an author who graduated with a bachelor degree in History and Political Science. Michel writes new adult and adult paranormal romance as well as contemporary romance.
With characters yelling "It's my turn damn it!!!" She tries to explain to them that alas, she can only type a hundred and twenty words a minute and they will have wait their turn. She knows eventually they find their way out of her head and to her fingertips and she looks forward to sharing them with you.
Social Links:
Facebook

a Rafflecopter giveaway
By Unknown - December 13, 2016