Exclusive Excerpt from Chance On Love
by Nancy Corrigan 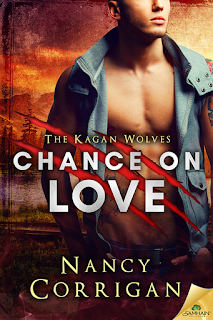 A surge of protectiveness tensed his muscles. By herself, she’d draw the attention of all the males in the bar, just as she’d caught his. The humans would hit on her.

Then again, that might be what she wanted. Males weren’t the only ones who suffered the effects of the full moon. She probably came shopping for a lover, maybe two. They’d spread her legs and lick her clit before pounding into her, making her orgasm over and over. She’d be sensitive, responsive, insatiable. She’d use them all night long until they were too tired to move.

His cock thickened, and a low growl rumbled in his chest. No. He wouldn’t go there. It was none of his business. She had a right to see her needs met any way she wanted.

He chugged his beer, then grabbed the second, but froze with the bottle at his lips.

He glanced at where she stood near the edge of the dance floor. He noted the short skirt she wore and the halter top that barely contained her plump breasts, but didn’t let his gaze linger on her lush body. He focused on her face and the clues it offered of her personality. Platinum-blonde hair caressed her shoulders, and gray shadow drew attention to her icy-blue eyes.

The strength emanating from her mesmerized him. Part came from the fact that she housed an arctic wolf, one of the rarer varieties. The rest stemmed from her force of will. It burned strongly in her direct stare. She had dominant written all over her. Hell, she could’ve worn a button that said ALPHA FEMALE IN TRAINING. He could see her ruling a pack at her mate’s side…at his side.

Blurb
Sometimes the only choice is to take a chance and enjoy the consequences.
Sean Reynolds is content wielding his dominant personality as the public face of Kagan Industries. Pack leadership and all the responsibilities that go with it doesn't interest him. But when alpha-in-waiting Nic Kagan skips town, there's no one to take on his aging father's spirit wolf. No one but Sean.
Sean wants none of it, but with his wolf growling in eagerness to fill that void, he heads for the bar in an attempt to drink the beast into submission.
He'd like to ignore the sultry blonde shifter burning up the dance floor with moves that make him painfully aware of the full moon. But when she abruptly disappears, his wolf sends him in hot pursuit. Following the scent of a female he can see in his bed not for a single night, but for a lifetimeNote: This is a short novella (11K) that introduces the Kagan Pack, the Alexander Pride's single shifter neighbors. This is not a full length book, but it may be read as a standalone.
Buy Links
Amazon: http://amzn.to/2fHoaN3
B&N: http://bit.ly/2dQiYGM
Google Play: http://bit.ly/2dTE2jc 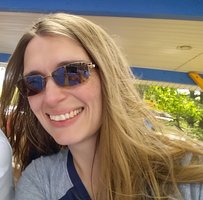 About the Author
A true romantic at heart, Nancy Corrigan is convinced there’s a knight in shining armor for every woman (or man), but you won’t find damsels in distress in her stories. She adores pairing alpha heroes with women strong enough to match them and bring them to their knees. She also enjoys flipping the traditional roles in romances because her motto is love and people should never be forced to conform to anyone’s norm. She holds a degree in chemistry and has worked in research but now focuses on ensuring quality. She considers it the perfect outlet for her as she’s the first to admit she has some OCD tendencies. It carries over into her writing life too. While engrossed in a novel, she has a habit of forgetting to eat and sleep. Fortunately, she’s married to her own knight in shining armor who understands her oddities and loves her anyway. They reside in Pennsylvania with their three children, dog, snake and guinea pigs. Her other interests include tattoos, animals, classic cars and all things spooky and sexy.
Website
http://www.nancycorriganauthor.com
Mailing List
http://www.myauthorbiz.com/ENewsletter.php?acct=NC0650152210
Goodreads
https://www.goodreads.com/author/show/7335900.Nancy_Corrigan
Amazon
http://amzn.to/2e4qmhr
Facebook
http://www.facebook.com/NancyCorriganAuthor
Twitter
https://twitter.com/nancy_corrigan
Pinterest
https://www.pinterest.com/nancycorrigan79/pins/follow/
Instagram
http://instagram.com/nancy_corrigan